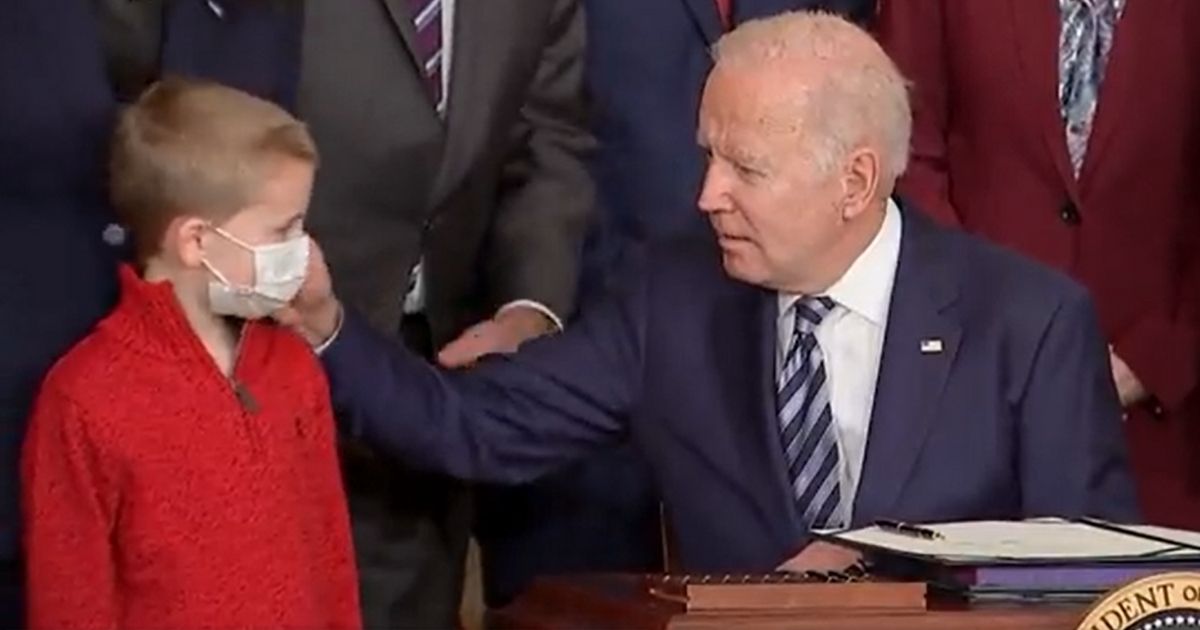 The following article, Watch: Biden Caresses 1st-Grader for 10 Seconds, Then Whispers ‘Meet Me After This’, was first published on Flag And Cross.

President Joe Biden continued his unbroken streak of seedy gaffes around children when he put his hands on a 7-year-old boy before offering to escort the child around the White House.

The latest cringeworthy exchange occurred Thursday while Biden was signing legislation to support first responders. That itself was interesting since he said last month that unvaccinated first responders should be fired.

At the signing, Biden chatted with Jake Bomba, the young son of a Maryland police officer who took his own life in 2019, according to WUSA-TV.

The career politician — who turns 79 on Saturday — thanked the first-grader for attending the event and offered him a personal tour of the White House.

“Meet me after this and I can show you the around the White House,” Biden whispered while stroking the boy’s arm and caressing his face. “Do you want to see it?”

Biden chatting with a child during bill signing
“Meet me after this, I can show you around the White House.” pic.twitter.com/ZjDOacyI9H

Normally, being offered a tour by the sitting president would be considered a great honor. However, context matters when assessing any situation.

In this instance, Biden spotlighted once again that he’s tone-deaf to optics and does not know how to read the room.

Given the criticism he has endured for his long, well-documented history of overly tactile encounters with small children and women, you’d think the president would keep his hands to himself.

But he couldn’t help himself, even though his handlers have probably warned him to stop acting inappropriately — at least in public.

Perhaps when you have engaged in such cringeworthy behavior for decades, it becomes a habit that’s hard to break.

Numerous Twitter users excoriated Biden over his latest inappropriate exchange with a child.

Why is he touching the kid?? Where are the parents?? This is sick

Why do people keep bringing their kids to this creeper!?

“…I can show you around the White House” pic.twitter.com/5IPTtwkmsT

By now, everyone is aware of Biden’s long history of creepy encounters with children and women during his five decades in politics.

Since being installed as president almost a year ago, his bizarre whispering fetish has extended to the press.

He did it AGAIN. pic.twitter.com/nrmJBEPnUD

Meanwhile, Biden’s poll numbers are tumbling amid the multiple crises he has inflamed with his irresponsible policies.

With the southern border under siege, raging inflation, an unprecedented supply chain crisis and crime waves roiling liberal cities, weary Americans can only speculate how much worse things will get over the coming months.

Continue reading: Watch: Biden Caresses 1st-Grader for 10 Seconds, Then Whispers ‘Meet Me After This’ ...