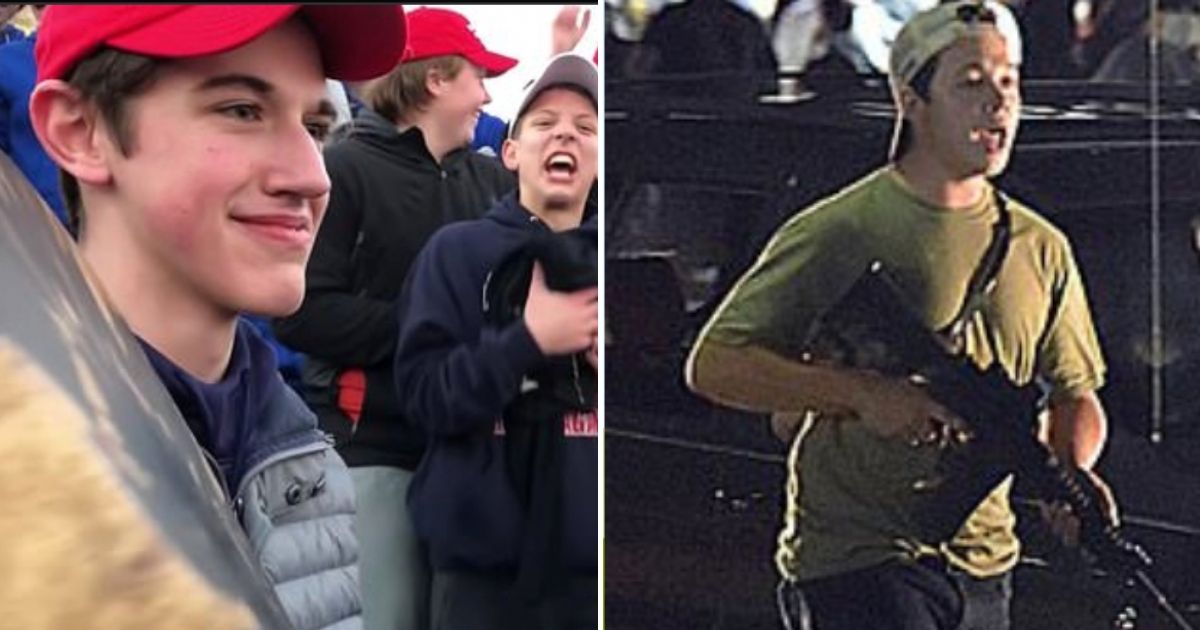 The following article, Take ‘Em Down: Nicholas Sandmann’s Advice on Rittenhouse’s Next Steps, was first published on Flag And Cross.

In January 2019 at the March for Life in Washington, D.C., Covington Catholic High School student Nicholas Sandmann accidentally became famous and was thrust into the eye of the media.

Having had his personal experience as the focal point of national controversy, Sandmann wrote an op-ed in the Daily Mail to comment on what Kyle Rittenhouse is currently going through, sympathize with him and offer advice on what steps Rittenhouse could take next.

At the march, Sandmann had an encounter with Nathan Phillips, a Native American elder and activist, who was participating in the Indigenous Peoples’ March taking place at the same time.

The encounter became viral on social media, quickly becoming a sensationalized news story. Many outlets cast the situation in a political light, and comments of racism exploded. Sandmann found himself in the middle of a polarizing situation, even though many outlets were reporting on the incident incorrectly.

The public outcry and backlash led to the teen being doxed by Twitter and other social media platforms. As a result, Sandmann was brutally targeted.

NICHOLAS SANDMANN: The corrupt liberal media came for me, just like they came for Kyle Rittenhouse https://t.co/1Swf6f5T01

Sandmann told Fox News that his life was turned upside down, and now everywhere he goes, he is noticed and stared at.

“It happens everywhere I go … From in my community to different parts of the country. Everywhere I go, there is someone that will point me out,” Sandmann said.

He has even received death threats and bomb threats.

Sandmann’s father, Ted Sandmann, testified in front of Kentucky lawmakers saying, “My son, Nicholas Sandmann, was the victim of the most sensational Twitter attack on a minor child in the history of the internet,” according to WCPO-TV.

In light of his firsthand experience with media and social media prejudice, Sandmann’s op-ed compared his experience to what Rittenhouse is now going through.

Just like Rittenhouse, Sandmann was also a minor when he became the focus of the entire national media. He was 16 years old when this incident happened to him. Rittenhouse was 17 years old when he got embroiled in Kenosha.

“The attacks on Kyle came from the national news media, just as they came for me,” he wrote. “They came quickly, without hesitation, because Kyle was an easy target that they could paint in the way they wanted to.”

Sandmann also sympathized with Rittenhouse, knowing how it feels to be threatened and nationally recognized, but in the worst of ways. He made it clear how damaging it is when the media turns against an individual.

“From my own experience, the death threats, feeling of no future ahead, and that millions of people hate you, is enough to alter you in many concrete ways and permanently,” Sandmann wrote. “Make no mistake: even the strongest of people cannot resist the mental impact when the media war machine targets you.”

Sandmann wanted to make it clear to everyone and to Rittenhouse that he knew just how awful it is to be targeted by the media, especially as a minor.

“At this time I would like to use my platform to let Kyle know that I am here for you and if you ever would like to reach out to me, I am about the only person our age to have an idea of how the media is treating you. The way the media has treated you is terrible, and you don’t have to face it alone,” Sandmann said.

However, Sandmann did encourage Rittenhouse, reminding him that even though it’s difficult, it’s important to hold the media accountable. He noted how he is still involved in six media lawsuits, even though it has been almost three years since the incident took place.

“So, if Kyle is prepared to take on another burden in his early life, with the acceptance that it might result in nothing, I answer, give it a shot and hold the media accountable,” Sandmann wrote.

Now, Sandmann is known to many as just the “Covington Kid.” And he knows that his notoriety will likely never go away.

“It’s a constant threat and it’s a terrible threat,” Sandmann said, according to Fox. “But you can’t choose to live your life in fear, or they’ve won and they robbed you of your life.”