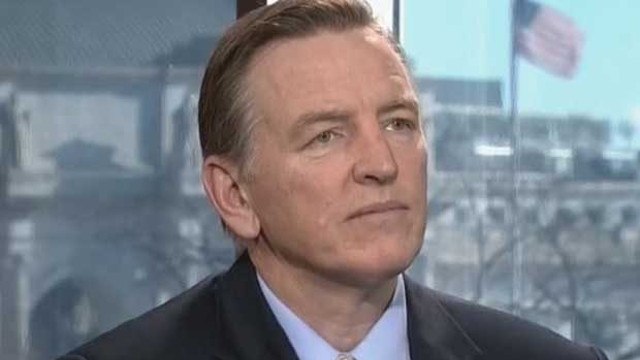 The following article, House Votes to Censure Rep. Paul Gosar Over Parody Video, was first published on Flag And Cross.

The United States House of Representatives voted to censure Arizona Republican Rep. Paul Gosar on Wednesday over a satirical video his office posted last week. The vote was split on overwhelmingly partisan lines, and it strips Gosar of his committee assignments.

According to The New York Times, all 221 Democrats voted to censure Gosar. Two Republicans, Reps. Liz Cheney of Wyoming and Adam Kinzinger of Illinois, joined them.

In addition, Republican Rep. David Joyce of Ohio simply voted “present.” The other 207 Republicans voted against the censure.

The video depicts footage of migrants crossing the border interwoven with characters from the anime show “Attack on Titan.” Gosar’s face is edited onto one of the characters, and he is shown battling another character with the face of New York Rep. Alexandria Ocasio-Cortez.

Democratic representatives argued the video was encouraging violence and compared it to the Capitol incursion on Jan. 6 of this year.

“When a member uses his or her national platform to encourage violence, tragically people listen to those words,” House Speaker Nancy Pelosi said.

“As the resolution that the committee is putting forth states, depictions of violence can foment actual violence and jeopardize the safety of elected officials as witnessed in this chamber on Jan. 6, 2021,” she went on.

“It is inconceivable that a member of our community here would wish to repeat the violence of that dark day.”

Ocasio-Cortez herself claimed the censure vote was not about her or Gosar, but rather what members of the House are “willing to accept.” She called the parody video “incitement of violence” against her.

.@AOC focuses on Kevin McCarthy, ” It is a sad day in which a member who leads a political party in the United States of America cannot bring themselves to say that issuing a depiction of murdering a member of congress is wrong.” pic.twitter.com/TaZUeYO414

Republicans, on the other hand, felt Democrats were acting in a hypocritical manner. House Minority Leader Kevin McCarthy said Democrats had an ulterior motive in issuing the resolution.

“It’s about control,” he said. “It’s not about a standard that everybody lives by; it’s a standard you enforce on one but not upon yourself. … When others on the other side of the aisle incite violence, it’s OK, because it’s rules for thee, but not for me.”

“It’s about control, it’s not about a standard that everybody lives by, it’s a standard you enforce on one but not upon yourself.” @GOPLeader and Rep. Alexandria Ocasio-Cortez respond to the Rep. Paul Gosar censure motion. pic.twitter.com/Pyh5e94sKb

Republican Rep. Lauren Boebert of Colorado called out multiple Democrats including California Reps. Maxine Waters and Eric Swalwell. She also criticized Minnesota Rep. Ilhan Omar, who many Republicans felt should have been censured over her various anti-Semitic comments.

“The jihad squad member from Minnesota has paid her husband, and not her brother husband, the other one, over a million dollars in campaign funds,” Boebert said. “This member is allowed on the Foreign Affairs Committee while praising terrorists.”

In June, Omar tweeted a video in which she asked Secretary of State Antony Blinken about justice. In the caption, she grouped the United States and Israel with Hamas and the Taliban.

“We must have the same level of accountability and justice for all victims of crimes against humanity,” she wrote. “We have seen unthinkable atrocities committed by the U.S., Hamas, Israel, Afghanistan, and the Taliban.”

We must have the same level of accountability and justice for all victims of crimes against humanity.

We have seen unthinkable atrocities committed by the U.S., Hamas, Israel, Afghanistan, and the Taliban.

I asked @SecBlinken where people are supposed to go for justice. pic.twitter.com/tUtxW5cIow

Omar was not publicly rebuked for those remarks, nor was she rebuked for allegedly using campaign donations to her fund husband’s business in 2020. Instead, the Times reported Gosar became the first congressman to be censured since then-Rep. Charles Rangel in 2010.