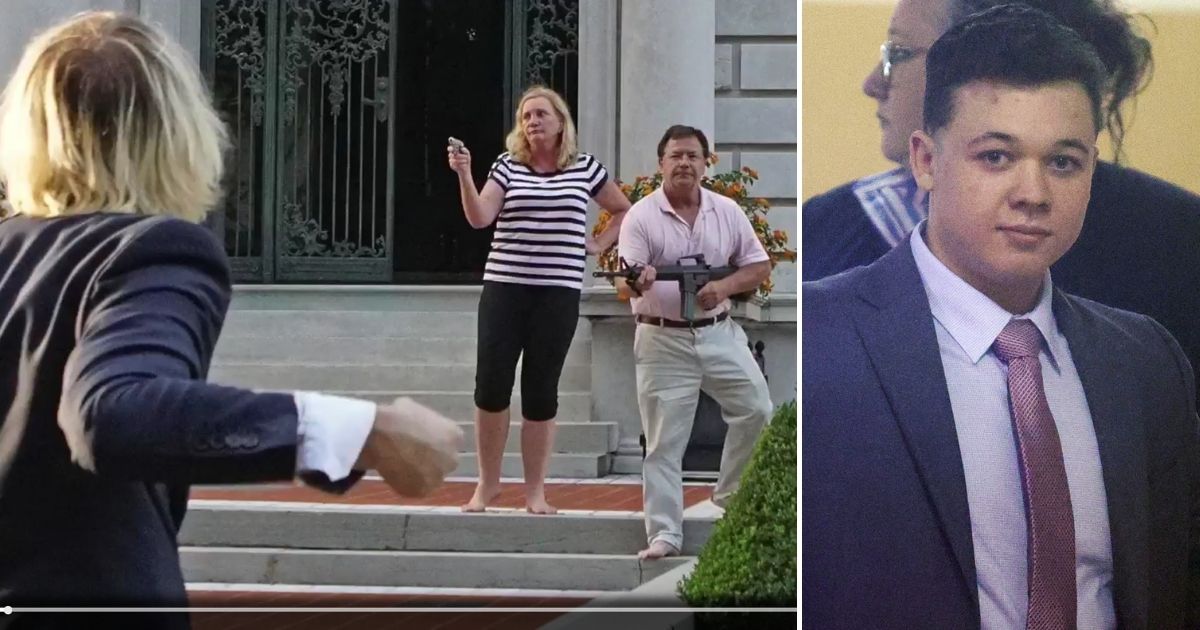 The Kyle Rittenhouse trial has far-reaching political ramifications. Your God-given right to protect yourself is being challenged by leftists who want to punish those who would protect private property and even their own lives.

The St. Louis couple, who armed themselves and stood in front of their home while Black Lives Matter protesters marched past, have been seen in Kenosha, Wisconsin, as reported by Fox News.

Mark and Patricia McCloskey were spotted outside a hotel near the Kenosha County Courthouse. “We think he’s been politically prosecuted, as were we, and we’re hoping that the jury find him not guilty on all counts and that he can go home a free man,” Mark McCloskey said.

He was in Kenosha to show support for Rittenhouse.

Rittenhouse faces charges for shooting and killing two men and wounding a third during a riot in August 2020. If all of the charges the prosecution initially threw at Rittenhouse would have stuck, he would be facing 170 years in prison. Rittenhouse is 18 years old.

“Rittenhouse is a young man,” McCloskey said. “He was doing the best he could to help his country and to save businesses up here in Kenosha, and as his reward, he’s having the rest of his life threatened.”

He also said he did not want to become a distraction. “I’m not going to show up to the courthouse until the jury is out so that we don’t get accused of interfering in any way [with] the results.”

Mark McCloskey launched a bid for Senate in Missouri earlier this year.

Missouri Governor Mike Parson pardoned the McCloskeys earlier this year, after each of them pleaded guilty to one misdemeanor charge.

There were hundreds of violent BLM protesters across the country in 2020, according to a study reported in Town Hall.

The McCloskeys undoubtedly were aware of this and took action to protect their property and themselves from the very real potential for violence.

There was violence in Kenosha, too.

Whether or not Rittenhouse is found guilty remains to be seen.

Alan Dershowitz, the distinguished retired Harvard law professor, thinks Rittenhouse should be acquitted, as reported by Newsmax.  He also accused CNN, The New York Times and left-wing media in general of acting as vigilantes in the high-profile case.

The left-wing media mob was quick to condemn the McCloskey couple as well.

But it’s not just the leftist media.

Senator Tom Cotton, a champion of the U.S. Constitution, was quick to criticize Joe Biden for characterizing Rittenhouse as a white supremacist “based on a few seconds of video.”

Calling Rittenhouse a white supremacist, Cotton said, “was just the go-to move of the Democrats. They do this all the time when they’re losing an argument on the merits. They don’t like parents going to school boards to protest what their kids are learning or school closures, so those parents are called racists. They don’t like that Virginians elected Republicans last week [so] they condemned Virginian voters as racist …

“They are constantly losing arguments with the American people, and then they just revert to name-calling towards their opponents. It’s not a sign of a party that is strong or healthy.”

It is apparent that leftist media and politicians don’t want people defending themselves without the consent of their regime — either implicit, as in the BLM riots, or explicit.

Leftists have irreconcilable differences with the founding principles of America, in which the government is to protect individual rights, not strip them away.

The Constitution must prevail, today and for as long as this country is called the United States of America. Otherwise, the leftists are going to be building a massive amount of new jails in Utopia.