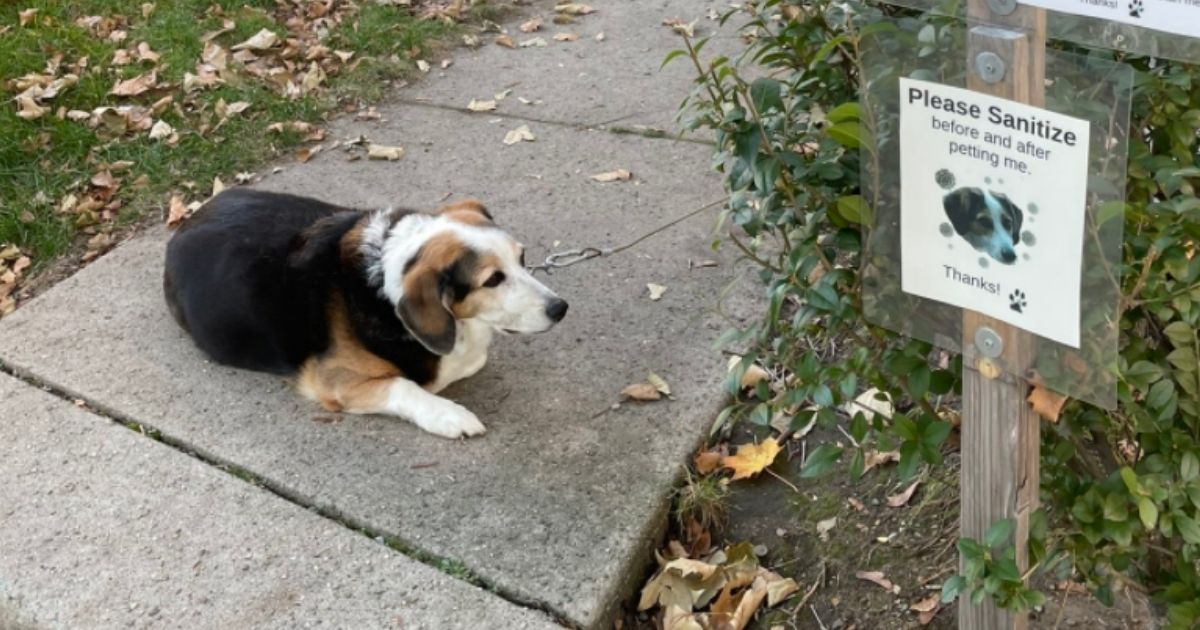 The following article, Dying Dog Gets ‘Extra Love’ from Strangers After Owner Posts Heartbreaking Sign, was first published on Flag And Cross.

Sparkle is an 11-year-old corgi and beagle or basset hound mix who has graced her neighborhood in Somerville, Massachusetts, with friendly wags and her wholesome presence for years.

During the pandemic, she greeted many people from the safety of her yard, bringing smiles and comfort in the way only a sweet pup can.

Sparkle spends her days going in and out of the house as she pleases. She’s secured by a long tie-out which allows her the freedom of moving around the yard and going back into the house without letting her get in harm’s way.

Her owner, Melora Rush, posted a sign at the front of the yard so that people passing by could learn a little about her ultra-chill dog.

“My name is Sparkle,” the sign with a big photo of the dog states. “I love to be outside and meet people, all year! But I also go inside whenever I want.

“If you have questions, my tag has my adoptive mom or dad’s cell phone number. They speak English better than me. Thanks.”

Rush explained to Newsweek how Sparkle came to live with them a decade ago.

“We adopted her from a rescue in New Hampshire called Mary’s Dogs 10 years ago,” she said. “She was one of their early rescues. She was about 1 yo when we adopted her.”

It was Rush’s son, Justin, 8 at the time, who came up with the name “Sparkle.” It suited.

While her muzzle has greyed over time and she’s become an increasingly senior doggy, Rush was hit with some particularly bad news earlier this year regarding their special pooch.

“We knew she had a serious infection in her jaw earlier this summer,” she said. “We treated that with various antibiotics but it continued to be a problem. A second biopsy, about a month ago, revealed the tumor in her jaw.

“My reaction was profound sadness coupled with a determination to enjoy every minute I had with her and to keep her as comfortable and happy as I possibly could. And to share her love with the neighborhood as much as she is able.”

“It is time to give Sparkle extra love,” the text reads. “Sparkle has cancer in her upper jaw, which sadly cannot be cured. She is being treated as needed with antibiotics (for secondary infection) and pain medications.

Visited the yard of @MayorSparkle today … along with so many others! Hear why this sweet pup has earned the love and attention from her neighbors on @NBC10Boston at 6pm pic.twitter.com/FVxcB6FUIn

“Sparkle is 11 years old and has given joy and comfort to many in the neighborhood. We hope she will continue to be with us for several more months, but we cannot know. Depending on her daily condition, she may be spending more time inside these days.

“If you see her outside please continue to love her (gently), but avoid touching the side of her face, because it may be swollen and sensitive, and there may be some bleeding.”

Made a new friend on my walk today

Photographer Eric Magnussen stumbled across the sweet, aging pup and her signs during a walk on Nov. 9. Touched by Sparkle and her story, he tweeted photos of the dog, saying “Made a new friend on my walk today,” and Sparkle’s fan club exploded.

More people than ever have visited to give the 11-year-old dog a little extra love. People have sent gifts, care packages and treats — so much so that Rush had to request that people make donations to dog shelters instead.

With Sparkle rising to celebrity status, Rush decided to start a Twitter account for her good old girl, called “SparkleMayorofSomerville.”

Kieran Taylor, who attended a local college, said that Sparkle has been a cornerstone of the neighborhood, and he’s glad she’s getting all the extra love.

“So many people have fond memories of seeing her outside for years,” he said. “She’s a real neighborhood fixture.

“It’s nice that she’s getting such a great send off. When I showed up to pet her yesterday, there was already someone there doing the same. She saw me and said ‘oh sparkle, your next guest is here!’ She’s just a sweet girl getting the love and attention she deserves.”

It’s clear that Sparkle hasn’t lost her shine. May her last days be filled to the brim with love, gentle pats and soft treats.

Dogs and horses are Gods special gift to humans.

What a great story of a great little doggie…I hope she has the fullest life before her time is up.