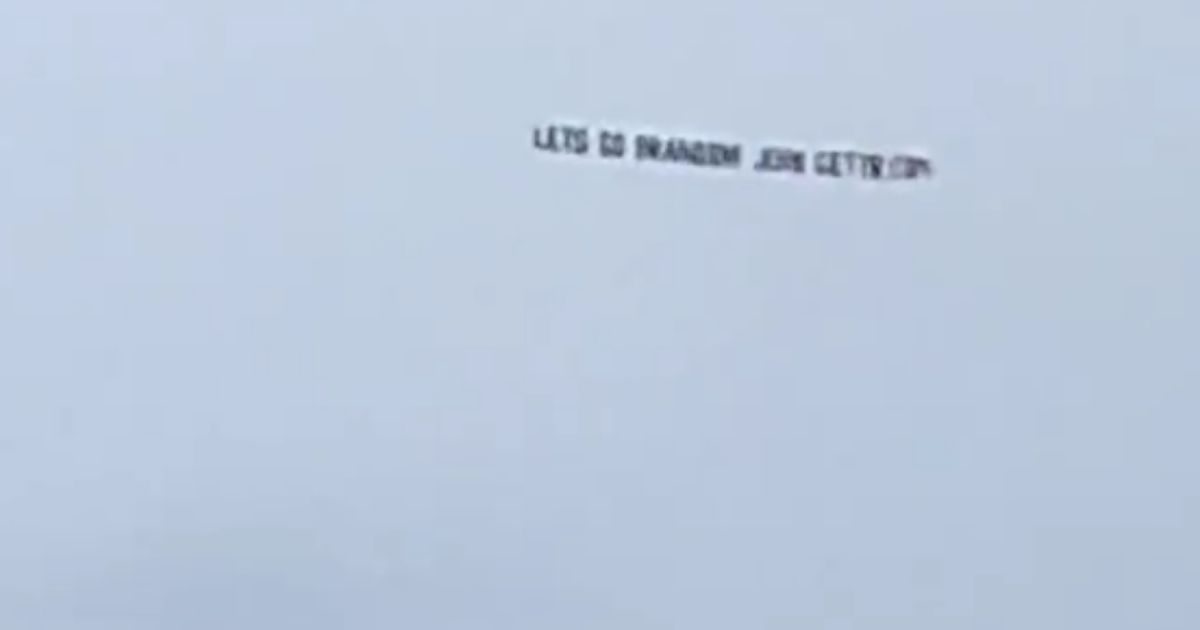 As Georgia was trouncing Missouri in a Southeastern Conference football matchup Saturday, a banner touting the slogan of the moment appeared in the sky over Athens, Georgia.

“Let’s Go Brandon,” read the banner, giving anyone in the stands rooting for Missouri something to look at other than their team during a 43-6 loss to the Bulldogs.

At the end of the banner were the words “Join Gettr.com,” a new social media platform whose website says it was “founded on the principles of free speech, independent thought and rejecting political censorship and ‘cancel culture.'”

For anyone living under a rock the past month, “Let’s Go Brandon” entered our lexicon in early October after a NASCAR race at the Talladega Superspeedway in Alabama.

Race winner Brandon Brown was interviewed by an NBC reporter who claimed the crowd in the background was chanting, “Let’s go Brandon.” The crowd actually was chanting, “F*** Joe Biden.”

Though the White House has claimed ignorance of the phrase, it has since has been everywhere, from a decoration on a dress worn by Republican Rep. Lauren Boebert of Colorado to the title of multiple chart-topping songs that revel in the disobedience engendered by those three words. (It could even rival the “lock her up!” chants from Trump supporters in the 2016 campaign, referring to then-Democratic candidate Hillary Clinton.)

“Will the movement end soon? I highly doubt it,” David Hookstead wrote for the Daily Caller as he cited its sky-high appearance.

“It’s week ten of the college football season and the chants, signs and banners only seem to be becoming more common,” he wrote.

“We’ll see how many more chants and signs we get the rest of the season, but I’d be willing to bet a lot of cash that we see plenty.”

In an Op-Ed in the New York Post, Salena Zito said the pompous miss the point.

“Like most pure movements in American political history, this one is not organized. It is spontaneous, somewhat hilarious, but it also gives people — who too often feel as though they are at the wrong end of the joke on social media and in the press — the ability to be part of something bigger than themselves,” she wrote.

“The ‘Let’s Go Brandon’ signs have even started replacing the Trump posters left over from last year’s election, making two points loud and clear: 1) Those who believed in the MAGA message are not going away, and 2) They can shift their slogan with the changing times.”

“The interesting thing about this phrase is that it has caught fire not because a political party tried to make it happen, but because people without any direction made it happen organically,” he told the Post.

“Movements in American politics are never top-down, which is why few people in the national press understood it was even happening. They capture the collective imagination and just go forward and become part of the fabric of a people and eventually become part of a coalition.”

He noted that Biden is not the only target.

“This is a funny way for people to not just take a jab at the president without being vulgar, but also the reporter, and the press by default, for clearly not repeating what that crowd was saying,” Bretz said.

Said Paul Sracic, a political science professor at Youngstown State University: “This is people also criticizing the press, a sub-tweet if you will, because ‘Let’s Go Brandon’ was done by a reporter rephrasing what was actually being said by the crowd.

“So they’re also making fun of the mainstream media on this and their inaccuracy and spin that they’re putting on things. ‘Let’s Go Brandon’ is sort of a double message; they don’t like Biden, but they also don’t like the media.

Zito noted that “the national media overreacts to movements like  ‘Let’s Go Brandon’ — or simply underestimates them — because reporters don’t understand conservatives or their ideology.

“It is not their world,” Sracic said. “Let’s face it, most of the media comes from the same place or lives in the same part of the country, goes to the same schools, goes through the same journalism programs, hangs out with the same people.

“So, of course, this doesn’t make any sense to them. It’s not within their frame or their worldview.”