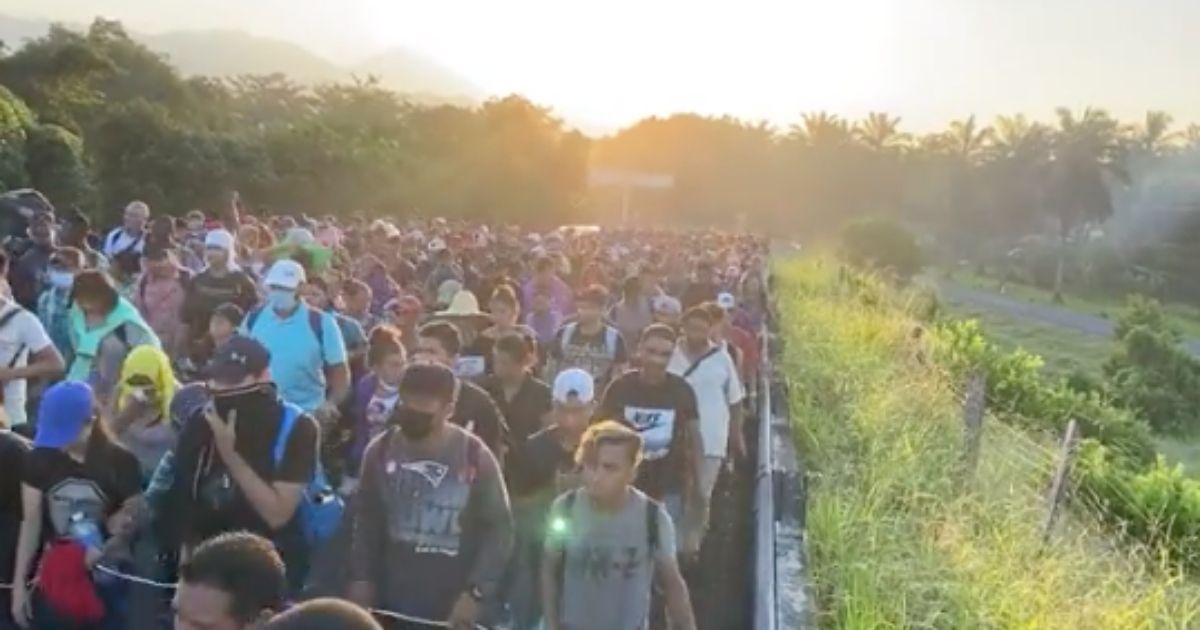 The following article, Massive Caravan Doubles to 4,000 Migrants, Including 500 Children, as Group Nears US Border, was first published on Flag And Cross.

A massive migrant caravan traveling through Mexico toward the southern border of the U.S. has now grown to 4,000, including 500 infants and children.

Fox News correspondent Griff Jenkins posted updates to Twitter on Wednesday as the migrant caravan continues to grow in size on its way to the border.

“Organizer Luis Garcia says this caravan is approximately 4000 strong with more than 400 children btwn the ages 7-18, 100 babies under 1 yo, 65 pregnant women (3 more than 8 months) and 4 wheelchair bound migrants,” Jenkins tweeted.

CARAVAN SIZE: Organizer Luis Garcia says this caravan is approximately 4000 strong with more than 400 children btwn the ages 7-18, 100 babies under 1 yo, 65 pregnant women (3 more than 8 months) and 4 wheelchair bound migrants @FoxNews #BorderCrisis pic.twitter.com/6Z0hc1Hfaf

An earlier post showed the size of the traveling group of migrants in a video from Wednesday morning. The group is ignoring warnings from Mexican Foreign Minister Marcelo Ebrard that they won’t be allowed to cross the border, as the Mexico Daily News reported.

DAY 5: As dawn breaks the Migrant Caravan marches again towards the US undeterred by Mexico’s FM Marcelo Ebrard @m_ebrard telling them they will not succeed @FoxNews #bordercrisis pic.twitter.com/Su8to02WIL

The caravan has doubled in size since Monday, when it included 2,000 migrants pushing north, with one migrant warning, “Tell Biden we are coming.”

The crowd impeded much of the vehicle traffic that was passing through the area. Jenkins noted this was the third day since the group had departed from Huehuetán.

Jenkins posted a video update on Sunday after the group had walked approximately 15 miles on its second day to rest by a river.

Migrant caravan cools off in a river after day 2 of traveling towards the US @foxnews #bordercrisis pic.twitter.com/NUmDn5KniK

Jenkins also shared a video of the migrants from above on Sunday that shared the visual impact of the massive group.

Thousands of immigrants in #Mexico started to march from the city of #Tapachula to go to the #US. pic.twitter.com/wjXzwBJbTP

Tapachula is located in the southern part of Mexico near the border with Guatemala.

The caravan’s progress comes as Customs and Border Protection recently announced 192,001 encounters at the southern border in September. The number was a 9 percent decrease compared to August, but marked the third consecutive month of at least 170,000 encounters.

The September numbers were also affected by more than 15,000 migrants who crossed at Del Rio, Texas.