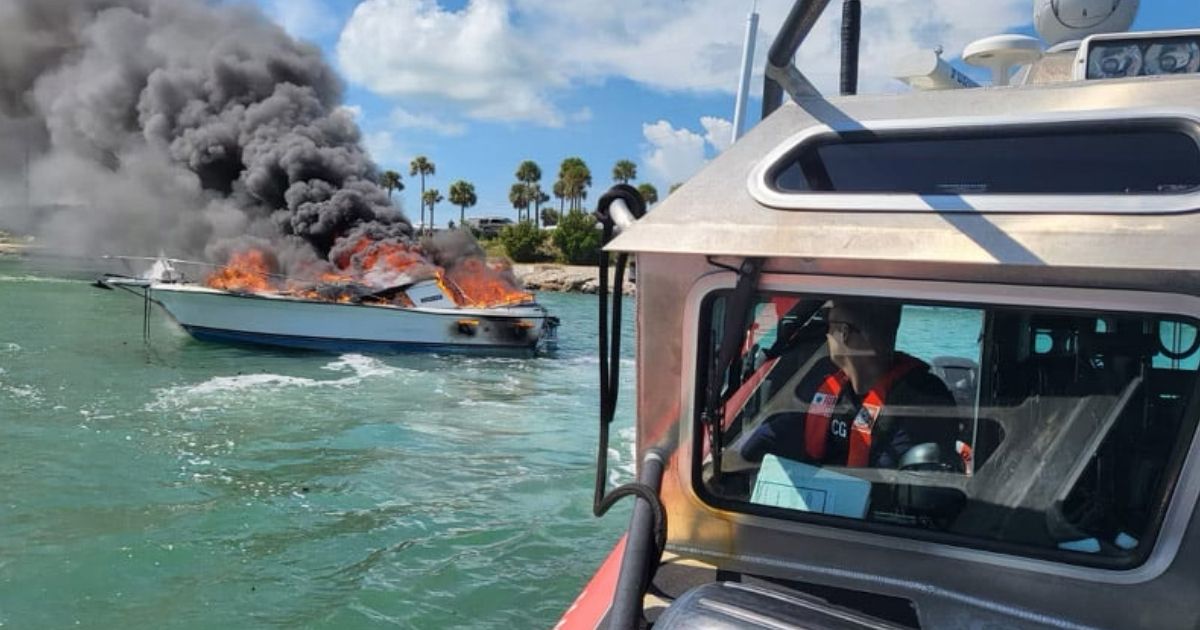 The following article, Boat Explodes on Maiden Voyage, Onlookers Scramble in Shocking Rescue, was first published on Flag And Cross.

A man and woman had a close brush with death on Oct. 13 when their newly purchased boat exploded during its first time out in Islamadora, Florida.

Officer Bobby Dube with the Florida Fish and Wildlife Conservation Commission told the Miami Herald that the couple was new to the area and had recently bought the boat. While the boat itself was no spring chicken — it was identified as a 26-foot, 1989 Carver — it was the couple’s first and last trip out on the vessel.

A nearby boater and good Samaritan was able to pick up the two after their craft exploded, and while the woman suffered some burns to her leg, the man appeared to be fine.

The dispatch report from the Monroe County Sheriff’s Office recorded that a 911 call came in at 2:10 p.m., and by 2:14 p.m., another caller informed them that the boat had exploded.

That wasn’t the end of the trouble, either. The two people were rescued, but the burning wreckage drifted close to Whale Harbor Bridge and the surrounding marinas, still spewing an enormous column of black smoke.

“With the good Samaritan rescuing the two people, our biggest concern was keeping the vessel from drifting toward other boats in the area and the mangroves,” U.S. Coast Petty Officer Second Class Logan Venero with Station Islamorada said.

The smoke was so heavy it caused visibility issues on the bridge, and traffic was stopped at one point. At around 2:30 p.m., the US Coast Guard managed to tow the remains of the destroyed boat to a nearby sandbar, where they tied it to a flag to be retrieved and disposed of later by the owner.

“Station Islamorada responded to a report of a vessel fire in the vicinity of the Whale Harbor bridge,” U.S. Coast Guard Station Islamadora posted on Facebook. “A nearby Good Samaritan recovered the two people on board. The boat crew, led by Petty Officer Venero, used the … response boat’s anchor to pull the burning vessel clear of the bridge and mangroves.

“Their quick thinking averted the situation from worsening and prevented the fire from impacting traffic on Overseas Highway or spreading to the mangroves. Our crew then transported the survivors back to land where one was treated by EMS for minor burns.

“This incident is a great reminder to make sure your fire extinguishers are serviceable and accessible [in] case of emergencies.

While it certainly wasn’t a pleasant welcome to the area for the couple, they were blessed to have made it out of the disaster with minor injuries.

The explosion caused quite a spectacle, and many locals are using it as a reminder that disasters happen when you least expect them and to make sure your emergency equipment is always at the ready.