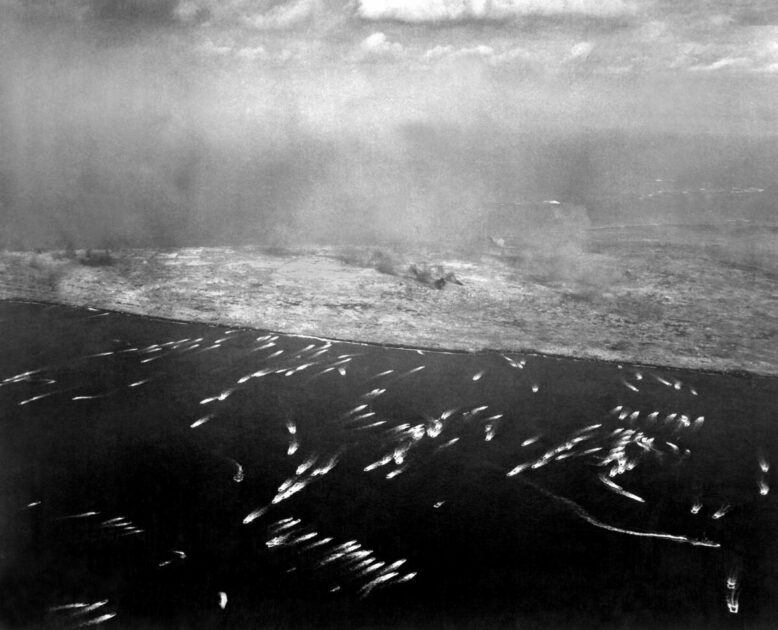 The following article, Ghost Ships from Legendary WWII Battle Suddenly Rise to Surface, Historians Are in Awe, was first published on Flag And Cross.

“Those who cannot remember the past are condemned to repeat it,” philosopher George Santayana said.

The ghosts of the Battle of Iwo Jima seem to agree.

Two dozen ships that sank during the epic World War II battle in 1945 have been raised from the bottom of the ocean, according to the U.K.’s Daily Mail.

The seabed has risen due to volcanic activity from Mount Suribachi, one of the most dangerous in the Pacific’s Ring of Fire. The ships are now sitting on a bed of volcanic ash.

The Japanese transport ships were captured by the U.S. toward the end of the war. The western end of Iwo Jima had no port, so the vessels were used as a breakwater to protect U.S. ships as they unloaded soldiers and supplies.

“The island was known as Brown Beach on invasion maps, which was reportedly done so to create an artificial naval base to support a U.S. military base before the assault on mainland Japan,” the Daily Mail reported.

The Battle of Iwo Jima was one of the bloodiest in U.S. Marine history.

“American forces invaded the island on February 19, 1945, and the ensuing Battle of Iwo Jima lasted for five weeks. In some of the bloodiest fighting of World War II, it’s believed that all but 200 or so of the 21,000 Japanese forces on the island were killed, as were almost 7,000 Marines,” according to History.com.

Iwo Jima was captured to provide the B-29’s hitting Tokyo with a place to make emergency landings.

American forces captured Mount Suribachi and raised the American flag in what is now an iconic image. During the battle, “Uncommon valor was a common virtue,” according to Adm. Chester Nimitz.

Coming at the end of World War II, the Battle of Iwo Jima is a symbol of American valor and the defeat of totalitarianism.

It can be difficult to get people in this technological age to appreciate the sacrifices American troops made for our country and for the world. World War II history can feel like it took place so long ago that many just can’t relate.

The year 1945, when the Battle of Iwo Jima took place, was 76 years ago. How many have parents or grandparents older than that? World War II is a living memory.

Totalitarianism is once again on the rise. If we hope to avoid being condemned to the horrors of war and the nightmare of totalitarian regimes, we need to pay attention to Santayana.

Remember the Battle of Iwo Jima.

The ghost ships are literal relics of America’s greatest triumph. Iwo Jima was perhaps the most gruesome chapter of the Pacific War.

We must never forget it.