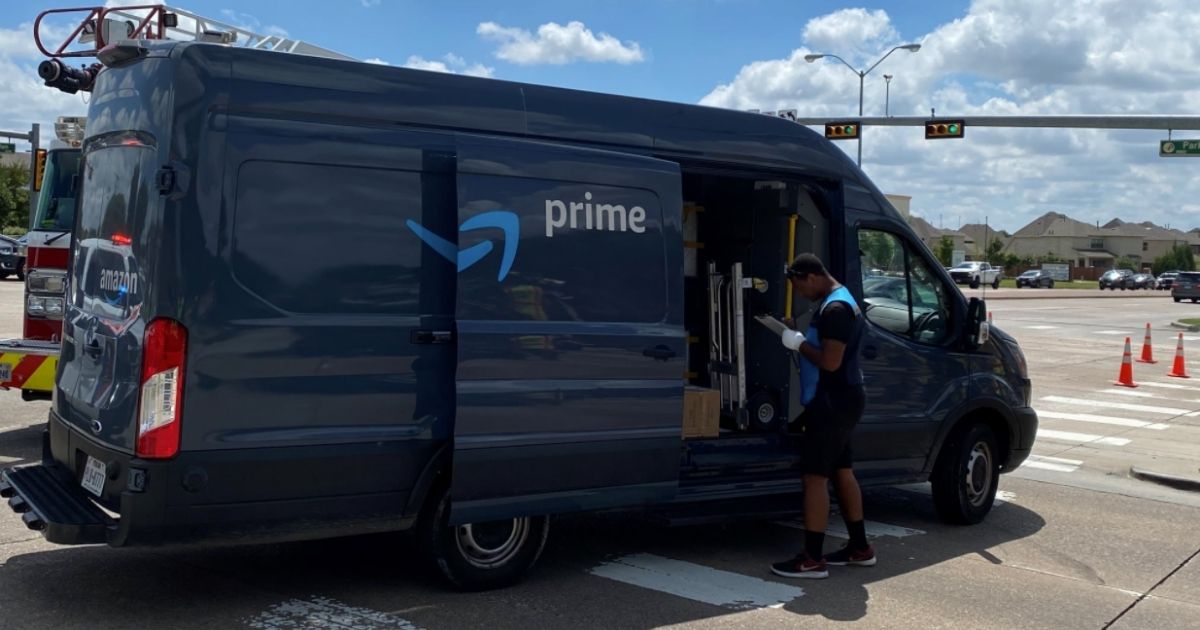 Amazon has definitely changed what “delivery” means, with their prime shipping resetting our timing expectations and raising the bar for getting products to customers in record time.

But it was one Amazon driver’s quick thinking that came in clutch in August when he provided deliverance for an injured man who was trapped in his car after getting into an accident.

On Aug. 27, Tirek Sherman was driving one of those characteristic Amazon Prime vans in Plano, Texas, when he witnessed a car accident, which left one vehicle overturned.

Someone had called 911, but by the time first responders were on the scene, they found that Sherman had already skillfully handled the situation.

“On Friday, August 27, 2021, at approximately 12:11 p.m., officers were dispatched to a rollover accident at the intersection of Preston and Parker Road where the occupant was trapped in the vehicle,” the Plano Texas Police Department shared on Oct. 1.

“Upon arrival, officers and fire department personnel observed an Amazon Prime van blocking the West bound lanes at Parker Road. The van was blocking traffic from driving though the scene of the overturned vehicle.

“The Amazon driver, Tirek Sherman, was stopped at a red light and observed the accident. He quickly moved his vehicle to block traffic to protect the driver and the scene. He then worked to free the trapped individual from the car.”

The post went on to recognize that the delivery driver’s quick actions “reduced the likelihood of additional crashes and further injury to the driver.”

“The driver is recovering well from his injuries due in part to actions of Mr. Sherman,” the post continued. “Mr. Sherman himself also received injuries to his hand while assisted the trapped motorist.

“We are thankful for Mr. Sherman’s willingness to step up and help a citizen in need.”

To recognize his valiant efforts, Chief Drain awarded Sherman with the “Citizen Hero Award” on behalf of the Plano police.

Amazon also recognized their employee’s lifesaving efforts and work by awarding Sherman with August’s “Driver of the Month” award.

Strangers, friends and family commented on the Plano police’s post about Sherman, congratulating him on the award and commending his heroism.

“Wow, I’m so very proud of you nephew,” Connie Renee Wallace wrote. “Jumping into action and not giving it a second thought runs through your veins. Continue to be that blessing God put you here on earth to be. Love you.”

“Congrats to my youngest,” Stephen T Ross Jr. commented. “A job well done. I truly believe this is your calling in life. Helping and saving the public. Keep striving for your goals in life and let no one deter your Goals. Ask our father to be your light. We love you.”

“Tirek Sherman I’m so freaking proud of you!!!” Nichole Weedn added. “This is so typical for you to always think fast and never hesitate! So glad your safe and the driver is to! So very proud of the man you’ve became! Growing up with you since middle school everyone knew you’d do amazing things!”