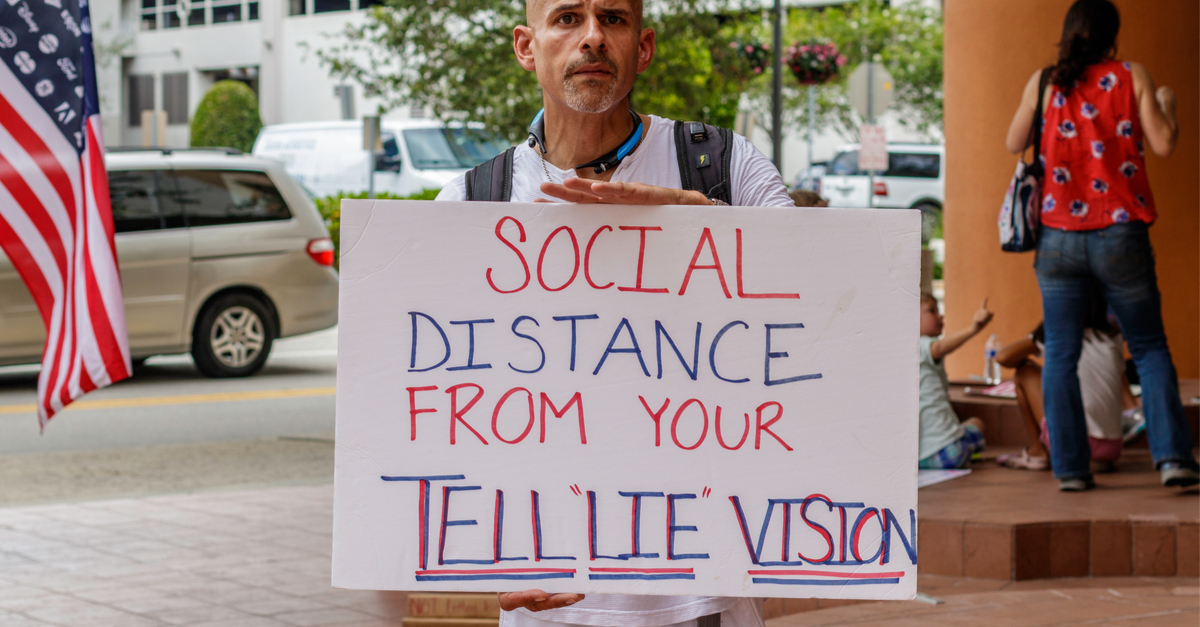 The following article, Is COVID Outrage a Hoax? New Poll Suggests Media is Manufacturing Virus Vitriol, was first published on Flag And Cross.

For months on end, social media has been rife with angst and unrest, all over the ways in which we handle the COVID-19 pandemic.

We see it everywhere:  The 100’s of comments on a Facebook thread, the snarky tweets, the viral videos explaining how folks on the other side of the argument are nincompoops of the highest order.  But is that all just the fever dream spawned by the unfettered pulpit of the online world, and fueled by the mainstream media’s undying need to show us only the most extreme examples of digital disdain?

A new poll seems to suggest that, for all the puffed-up chests and unabashed buffoonery of the online world, Americans aren’t really all that conflicted when it comes to the coronavirus.

Politically, the United States may be a 50-50 country. But it’s actually a lot less divided on how to deal with COVID-19.

Consider the numbers. According to the latest Yahoo News/YouGov poll of 1,640 U.S. adults, conducted from Oct. 1 to 4, just 15 percent say they will not get vaccinated — down from 19 percent in August. Only 17 percent say they “never” wore a mask during the previous week. And just 16 percent say, incorrectly, that face coverings are “not effective at all” in preventing the spread of the virus.

Even opinions on masking and vaccination mandates are not quite as polarized as most hot-button political issues tend to be. Only one-quarter of Americans (27 percent) say kids should not be required to wear masks in school; meanwhile, a third (34 percent) are against requiring as many people as possible to get vaccinated if Delta surges again.

In contrast, nearly half the electorate (47 percent) voted in 2020 for then-President Donald Trump — the figure whose followers are typically associated with such views. To be sure, anti-mask, anti-vax Trump fans tend to be the loudest, so they invariably attract the most media attention. But millions of quieter Republicans don’t fit the mold. A full 40 percent, for instance, still say they mask up “always” or “some of the time”; one-third say they would support requiring as many people as possible to get vaccinated. And the vast majority (70 percent) say they’ve either gotten jabbed themselves or are open to it.

Even the vaccination debacle isn’t nearly as bad as the media would have you believe.

The press persists in describing us as “deeply polarized” over vaccination, but that’s not really accurate. While just 56 percent of the total U.S. population is fullyvaccinated, that’s partly because most children aren’t even eligible yet. The truth is that more than 78 percent of U.S. adults have already received at least one shot. In comparison, a mere 48 percent of grown-ups got a flu shot during the 2018-19 season. On top of that, an additional 15 percent of unvaccinated adults say they haven’t ruled out a COVID jab yet. It’s hard to find this much agreement on anything else in American life.

Once again, the mainstream media is playing us for fools, and dividing us in order to bolster their own ratings and revenue.