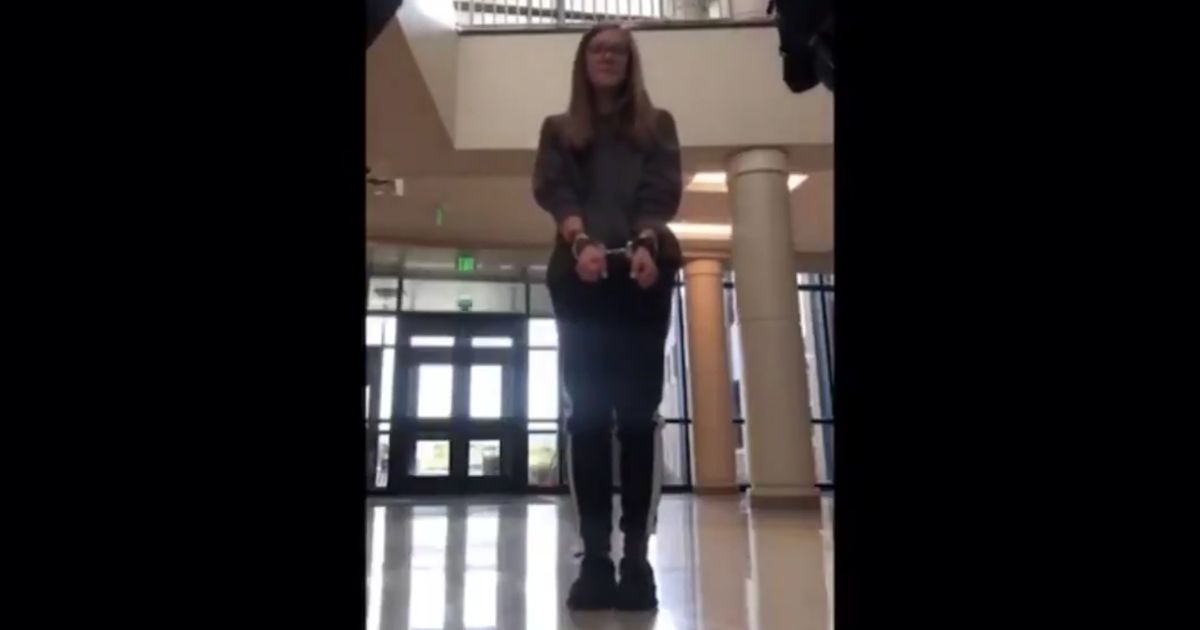 The following article, Video Shows WY Student Arrested and Removed from School in Handcuffs After Refusing to Wear Mask in School, was first published on Flag And Cross.

Surgical masks were first created to prevent health care workers from infecting their patients’ wounds. They weren’t meant to be used by healthy people to slow or stop the spread of viruses.

Nevertheless, after months of flip-flopping and inconsistent messaging, the ruling health-elite — made up of the World Health Organization, the Centers for Disease Control and Prevention, White House chief medical adviser Dr. Anthony Fauci and others — has decided that mandatory masking is key when it comes to stopping the COVID-19 pandemic.

In fact, this has become so much the case that, on Thursday, a 16-year-old girl was removed from her school in handcuffs for refusing to wear a mask.

This is Grace Smith.

Grace is a 16-year-old junior at Laramie High School who was arrested and removed from school in handcuffs.

Her crime? Not wearing a surgical mask. pic.twitter.com/jze8euEUAH

Before coming into school on Thursday morning, Grace Smith had already served “two consecutive two-day suspensions” for not complying with her school district’s mask mandate, the Sioux City Journal reported.

Albany County School District’s mandate states that “anyone inside a district building must have his or her face covered.”

The rule is up for review in a week, but Smith wasn’t willing to wait that long. She believes that the mandate violates her constitutional rights and, as a result, continues to refuse to comply with the order.

Smith told the Sioux City Journal that the first time she was suspended, she “just left.”

“Then, after talking with our attorney, we decided to push it, so on Tuesday I didn’t [leave] and took the citation for $500 and then left,” Smith said.

Laramie High School administration warned Smith that each time she enters her school without a mask, she will be issued a misdemeanor trespassing citation.

This time, she didn’t want to leave, saying she had “a right” to be at school. Smith was subsequently handcuffed (as if she posed some sort of threat to her arresting officers), hauled off school property and arrested.

Meet Grace. She’s a 16 year old girl who’s showing more courage than most men right now. She’s refusing to comply with the mask mandate her Wyoming school board is trying to force. She was fined and arrested. Here’s her arrest. She’s a hero.

All of this drama, all of this punishment merely for refusing to wear a mask at her own school.

What makes this story even more ludicrous is the total lack of evidence proving masking actually works.

A comprehensive report from City-Journal that reviewed all of the evidence on masking came to the following conclusion:

“In sum, of the 14 RCTs that have tested the effectiveness of masks in preventing the transmission of respiratory viruses, three suggest, but do not provide any statistically significant evidence in intention-to-treat analysis, that masks might be useful. The other eleven suggest that masks are either useless — whether compared with no masks or because they appear not to add to good hand hygiene alone — or actually counterproductive,” the report read.

In other words, any sort of conclusive evidence that proves putting a mask on a healthy person is effective in stopping COVID-19 has yet to be found, and yet children are being arrested for refusing to wear them.

Continue reading: Video Shows WY Student Arrested and Removed from School in Handcuffs After Refusing to Wear Mask in School ...