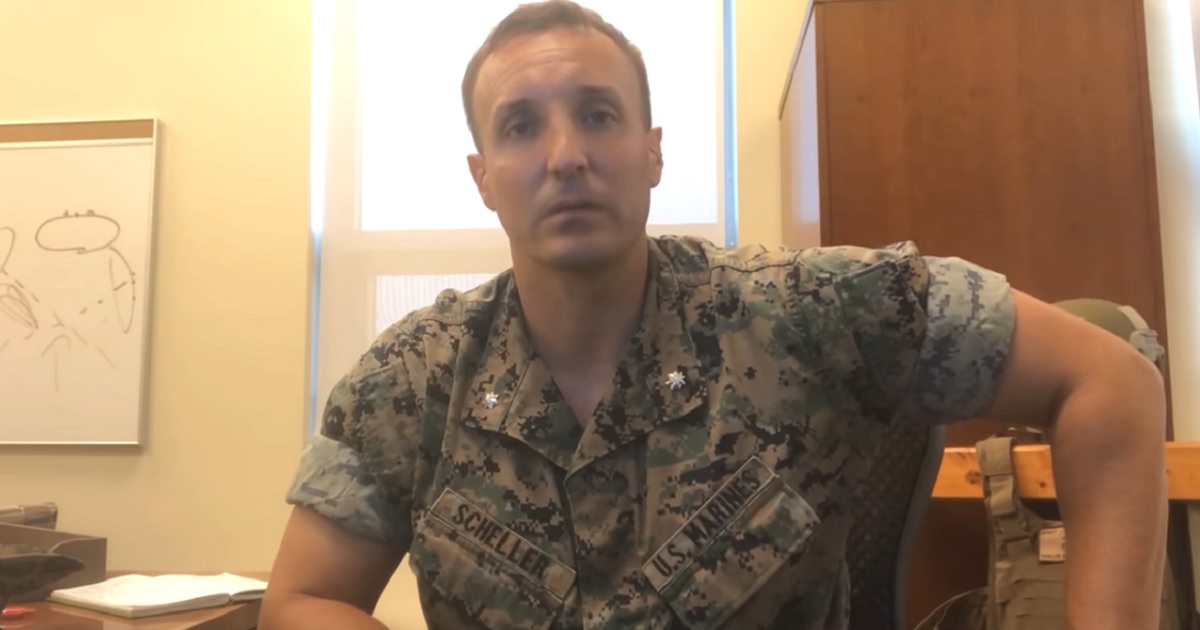 The following article, Marine Officer Charged with 6 Crimes for Criticizing Biden’s Afghanistan Withdrawal, was first published on Flag And Cross.

The Marine Corps has filed six charges against Marine Lt. Col. Stuart Scheller over his passionate attack on the leadership mistakes that marked the debacle of the Afghanistan withdrawal.

Scheller will face a misdemeanor-level special court-martial, according to Fox News.

The charges were referred by Maj. Gen. Julian D. Alford, and came a day after Scheller was released from the brig at Camp LeJeune, North Carolina.

Scheller ripped into senior military leadership in a series of videos and posts that began on the day a terrorist attack killed 13 U.S. service members in Kabul. He noted in his final Facebook post that he was defying orders to stop his public comments.

The court-martial will take place next week, according to The Washington Times.

Citing a source “familiar with the case,” the paper reported that Scheller is said to be “doing great” and has been “energized by the support of rank-and-file Marines.”

The Times also reported that a “source close to” Scheller indicated that Marine has not softened his stance.

“If the generals in charge of the Afghanistan debacle thought a week in an air-conditioned jail cell was going to stop his calls for accountability, they are sorely mistaken,” the source said.

The Marine Corps said Scheller is being punished for the manner of his dissent.

“Posting to social media criticizing the chain of command is not the proper manner in which to raise concerns,” Marine Capt. Sam Stephenson said in a statement, according to the Washington Times.

“Orders and directives regulate the conduct of members of our military and ensure good order and discipline,” the statement said.

In one video, Scheller said he had a “growing discontent and contempt” for “ineptitude at the foreign policy level” by the military’s top commanders.

The time between now and the court-martial is likely to be one of negotiation. The website Military.com, citing a “source with knowledge of the discussions,” reported that Scheller is hoping for an honorable discharge.

“I think it’s very likely that they will accept a resignation in lieu of court-martial,” Greg Rinckey, a former Army prosecutor and Judge Advocate General’s Corps defense attorney, told Military.com.

In a Tuesday interview on the Fox News show “The Ingraham Angle,” Tony Buzbee, Scheller’s attorney, offered a window into Scheller’s state of mind.

“When I spoke to him this afternoon he noted … he was in the brig, of course, in a safe place, of course, not with his family, but he is reminded that there are many military families who have it a lot worse than him, including the 13 families who suffered on that fateful day there in Afghanistan,” Buzbee said.

“So that’s the reason he spoke out. His message still rings true, and he has done what a real Marine does. And he hopes that somebody, somewhere within the military constabulary will take accountability. So far, he’s the one who’s been held accountable, and it’s just not right,” Buzbee said.

Republican Rep. Louie Gohmert of Texas said the case shows the need for reforming the military justice system, according to Military.com.

The Uniform Code of Military Justice, Gohmert, “was created to facilitate the exigencies of war but is now too often abused and merely strips our soldiers of their constitutional rights.”