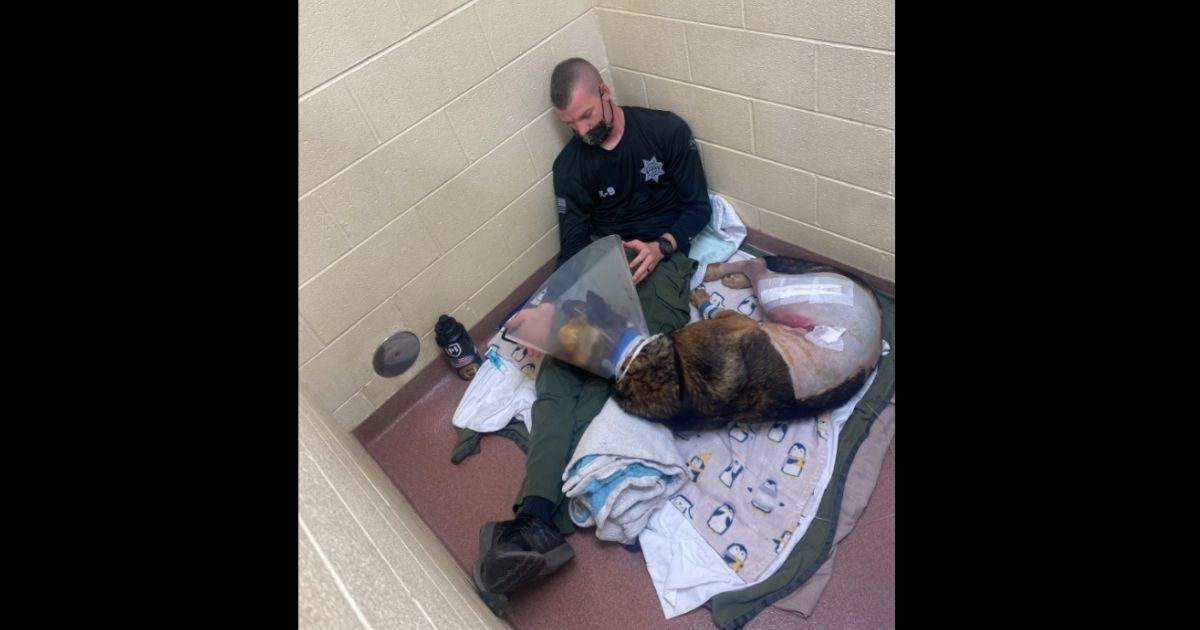 The following article, After 8-Hour Standoff with SWAT, Fugitive Shoots K9: Police Scramble, was first published on Flag And Cross.

Shortly after 7 p.m. on Wednesday, police arrived at a home in Greenville County, South Carolina, where an armed man was holed up after shooting at his mother several times.

Thankfully his mother had made it out of the house and to a neighbor’s house, where she called the police.

In the 8-hour standoff that followed, authorities used a variety of methods to try to reach the man, later identified as 44-year-old Anthony Shay Hawthorne, according to Fox News.

“We knew there were several guns in the house,” the sheriff later said, according to WHNS-TV. “We felt like he was probably a threat to himself at that point so we thought we would just wait them out so we deployed several tactics at that time to try to get them to come out.”

But K9 Nikos did.

When Nikos went after Hawthorne, he was shot multiple times but still managed to help subdue the man enough that the SWAT team was able to enter and make the arrest.

Hawthorne was arrested and then had to go to the hospital for the wounds Nikos sustained. Hawthorne now faces even more charges after several deputies came forward to say the suspect also used aerosolized spray and a lighter to create a makeshift flamethrower, which he then directed toward the deputies.

But most people’s focus has been on Nikos, who threw himself into his work and had to undergo surgery as a result.

“The resiliency of Nikos in these early stages of this incident has been incredible and we are certainly pulling for him as he begins the process for recovery,” the sheriff said.

“The treatment, care and urgency that they have displayed for our buddy Nikos, I truly cannot put into words but I am just thankful…thankful to have professionals in our community like them who work hand in hand with our first responders.”

On Friday, the sheriff’s office shared an update with good news.

“We have received a number of inquiries regarding the status of K-9 Nikos, who suffered multiple gunshot wounds following the standoff that occurred Wednesday evening on Gunter Road,” the Greenville County Sheriff’s Office posted on Facebook.

“We just want to provide everyone with an update. Nikos underwent surgery earlier today and his prognosis is very good. The vets and staff at Upstate Vet Emergency + Specialty Care have been absolutely remarkable and they expressed their sincere optimism for Nikos strong recovery. Thank you to everyone who has reached out with your concerns and care for our buddy Nikos.”

On Monday, the sheriff’s office shared even better news: Nikos was ready to leave the veterinarian hospital.

“Nikos is going home!” the Greenville County Sheriff’s Office posted on Monday. “K-9 Nikos and his handler Deputy Humburg go home today and will continue Nikos’ recovery at home after Veterinarians stated they were very happy with his progress.

“Thank you for all your prayers and kindness. We love you all.”