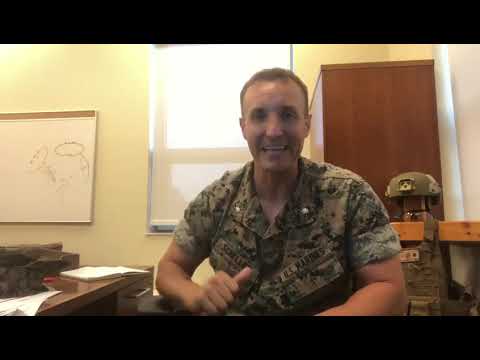 The following article, More Than $2 Million Raised for Marine Jailed After Criticizing Disastrous Afghan Withdrawal, was first published on Flag And Cross.

Americans are rallying to the cause of the Marine who dared to speak his mind about the debacle in Afghanistan.

As of Sunday morning, more than $2.2 million had been donated or pledged to help Marine Lt. Col. Stu Scheller, according to a fund-raising page. The amount already exceeds the original goal of $2 million to help Scheller with the costs of his upcoming legal battle as well as supporting his family in the event the military punishes Scheller by stripping away the 17-year veteran’s benefits.

Scheller took to social media in August to criticize senior leaders for the disaster in Afghanistan, and continued to post comments after being ordered not to do so.

The Pipe Hitter Foundation, which is coordinating the fund drive, said on the page that it “is incredibly proud to assist Lieutenant Colonel Stuart Scheller, a Marine who had the courage to demand accountability from his leadership in the wake of a disastrous exit from Afghanistan that lead to the death of 13 of his fellow service members.”

The site noted that Scheller risked his career in the name of accountability.

“Lt. Col. Scheller took to social media and recorded a video titled: ‘To the American Leadership’ to send a message to his senior leaders that it isn’t just lower-level officers and enlisted who need to take responsibility for their mistakes,” the page states.

“In that video, Scheller states, ‘What you believe in can only be defined by what you are willing to risk.’ That day, Stu risked everything to stand up for what he believes. Lt. Col. Scheller stated in his first video that he was willing to lose his job, his retirement, and his family’s stability to stand for accountability.  And he did lose all three of those things.”

The foundation said Scheller is “exactly the type of Marine we need at this moment in time – to push back against the national security structure that has a long-demonstrated track record of inefficiencies, corruption, and failure.”

In an interview Saturday, Stuart Scheller Sr. told Newsmax that his son’s arrest and confinement in the brig at Camp LeJeune, North Carolina, is “an outrage.”

“The thing that saddens us the most is these generals are hurting the reputation of the Marine Corps, of the Navy, of our armed services, and our country,” he said.

“And it’s as if they can’t even see that,” he said. “I suppose it’s arrogance. They’re stubborn. But they know, and they believe they can win, the battle against Lt. Col. Stuart Scheller by putting all the forces to bear down on him as they have for the last 30 days.”

The Marine’s father said defense officials have forgotten what can happen when one Marine takes a stand.

“You and I know, and America knows, they’re going to lose the war. And the war is the American people standing up demanding accountability. It’s not just Stuart Scheller anymore,” he said.

“It’s the American people are contacting their congresspeople. They’re finding their voice, and that inspires us, and that’s why we are continuing to tell Stuart’s story,” he said.

Scheller said that he and his wife, Cathy, have as their top priority “to free our son honorably with his benefits, and we are asking Americans to do that.”

But they want Americans to support their son in the wider battle he launched on social media.

“The fight with our senior leaders: Ask your congresspeople to continue to challenge them,” Scheller’s father said. “That’s all we can do. We’re a mom and pop trying to protect our son and our grandchildren. It’s been difficult, but you know what I tell people? Cathy and I haven’t had to spend the last five nights in prison.”

As noted Friday by Fox Nation host Lara Logan, “what they’re really doing is jailing him for speaking the truth. ”

“And what we’re seeing now is that they’re actually going to go to the extreme of jailing someone for something like this. They could just — they could discharge him. They could do disciplinary action, but they’re not. … The generals who are actually responsible are not taking responsibility, but they’re holding someone lower down in the chain of command responsible. So, that is the kind of hypocrisy that Americans have just had enough of.”

He was reduced in rank from chief petty officer to petty officer first class and sentenced to four months, time served. In November 2019, then-President Donald Trump declined to pardon Gallagher, but restored his rank and pay.