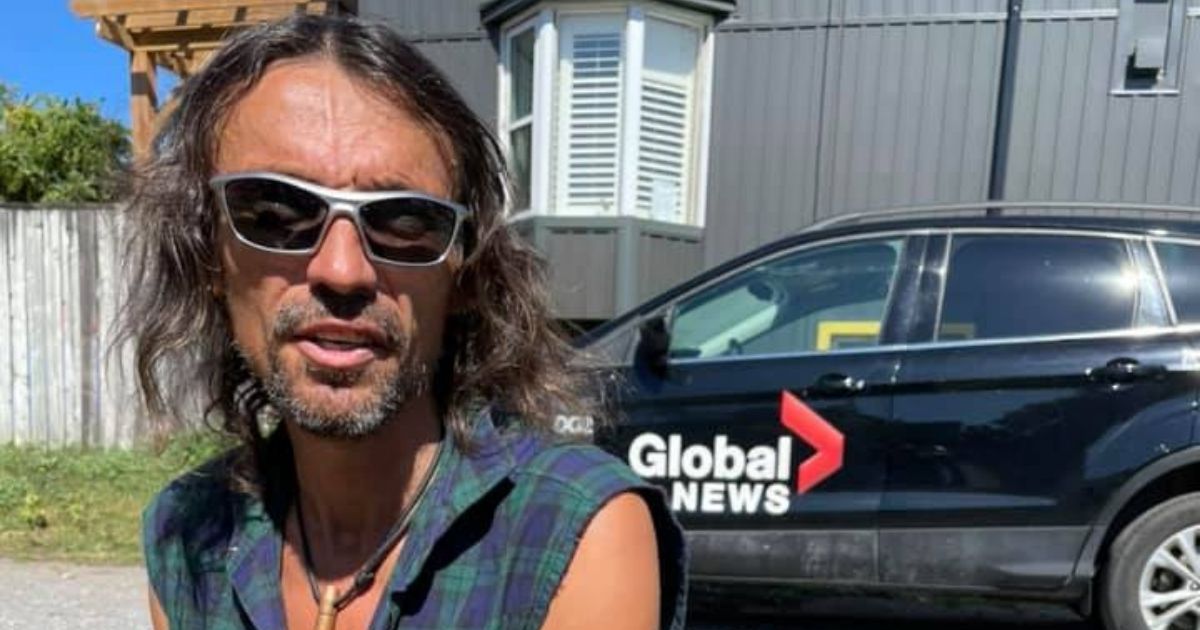 The following article, Good Samaritan: One Woman's Act of Kindness Turns Homeless Man's Life Around, was first published on Flag And Cross.

Canadians have a reputation for being the friendly sort, and few people embody that as well as Kim Cormier of Kingston, Ontario.

The 35-year-old mortgage agent’s life has been irreversibly changed ever since July, when a “chance” meeting brought her face-to-face with 46-year-old David McDonald.

When McDonald passed her house on that day two months ago, he had no idea the woman he asked for help would help him so thoroughly.

McDonald had experienced a string of lows in the past decade, and when the tire of his e-scooter blew out in from of Cormier’s house, it was just one more low to deal with.

He spotted Cormier working while on her front porch and asked if she could watch his belongings for him while he went to get the item he’d need to fix his scooter.

She obliged, and by the time he got back, she presented him with her first offer: dinner.

Cormier and her partner, Andrew Embury, got to know McDonald over the meal, and they were amazed at his tale. Up until 2010, McDonald had been doing very well financially as the owner of a gas station, was in a 10-year relationship and had a daughter.

But gas prices rose, he lost his business and his partner left him, so he moved to Toronto with his teen daughter. When she was old enough to move out, he moved again and spent the next few years struggling with homelessness.

Sometimes he stayed with family. Sometimes he was able to rent a place to stay. He has feared for his life, had some of his possessions stolen, lost others in a fire and walked/biked 3,000 miles to get back to Ontario.

“I literally lost my whole life after the gas station — the life that I knew then,” he told CBC.

“I couldn’t imagine being homeless. I cried. And so it was hard for me to accept help — charity, I felt.”

The transition has been rough. McDonald gets a monthly stipend and recycles cans, but shortly after meeting Cormier, he was back to living on the streets, refusing to use homeless services because he thinks other people need them more.

“I don’t use the services provided for homeless because I feel that, although I’m homeless, other people are worse off than me,” he explained.

“It’s a disposable society. I find everything. You have to swallow your pride when you’re homeless.”

Cormier started looking out for McDonald. She gave him the shoes off her own feet, she bought him new clothes and she provided him with a backpack that had a solar panel charger for his phone.

“There’s a misconception about homeless people not wanting to work and being lazy, and he’s none of the above,” she said. “He doesn’t drink or do drugs. He’s out all day long just finding things, accumulating, and he’s generous to the rest of the homeless people.”

Then came another big offer: Cormier approached McDonald and said he could live in their backyard. He could be safe and use the facilities when necessary.

“He has very good stories, and he’s just friendly and respectful,” Cormier said. “It’s kind of nice to have someone come in and out, and someone to talk to, and a friend to rely on.”

But the tent in the backyard is only a temporary measure, so Cormier started looking into micro homes. She started a fundraiser for the $18,000 it would cost to get such a structure stationed in the yard, and people have responded generously — with one stranger even donating a good chunk of $2,500.

“David, Andrew and I would like to send out the largest tear filled, forever grateful, loving THANK YOU from the bottoms of our hearts for all your kindness and generosity in helping us achieve our final outcome of A Micro Home for David,” Cormier posted in a GoFundMe update on Sept. 19.

“It brought tears to my eyes and goose bumps,” McDonald said. “I couldn’t believe it.”

But if you ask McDonald and Cormier who has the better end of the deal, you won’t get the same answer.

“I feel very blessed to have met David,” Cormier said, later adding that “he’s part of the family now.”

“I’m the blessed one,” McDonald countered. “She’s done more than I can ever say thank you for.”

May God give you many blessings Mrs. Cormier! And to you Andrew, my prayers are with you! God’s blessings to you both!