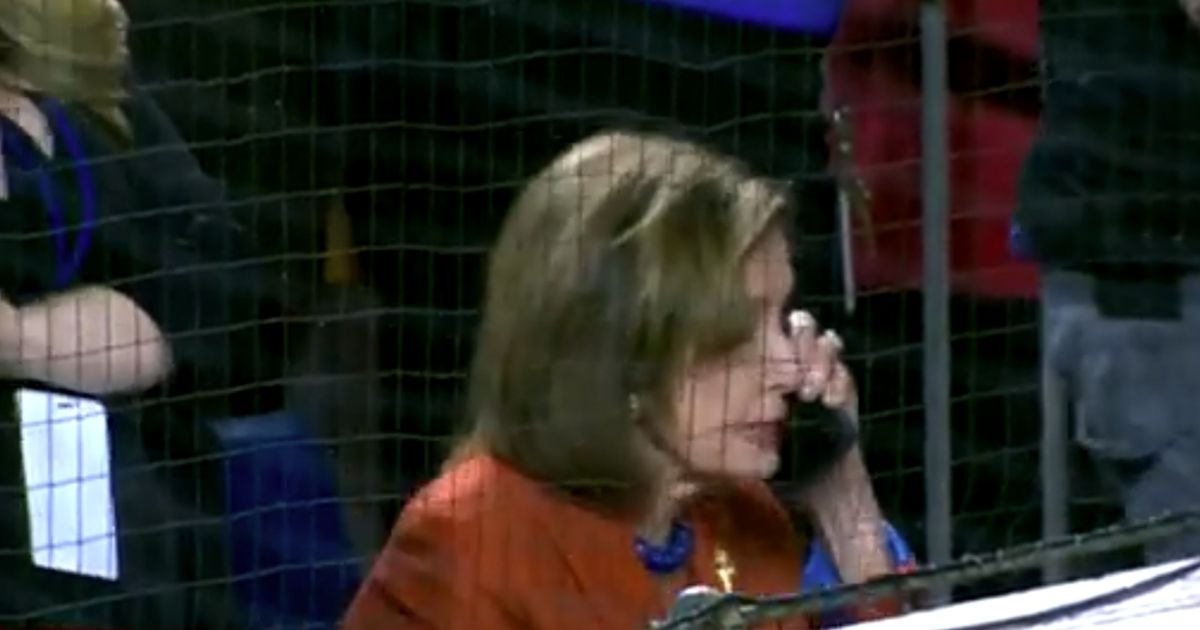 The following article, Video of 'Furious'-Looking Pelosi at Congressional Baseball Game Blows Up Online, was first published on Flag And Cross.

House Speaker Nancy Pelosi appeared to be in a heated phone conversation on Wednesday during the annual Congressional Baseball Game while the Democratic Party’s entire agenda teetered in the balance.

During the same game in which President Joe Biden was booed during a short appearance, Pelosi was captured by a C-SPAN camera engaged in what appeared to be a heated conversation on her mobile phone. She looked nothing short of furious.

Looks like Nancy Pelosi is yelling at someone over the phone pic.twitter.com/oYfWJejQyp

It’s important to note that before Pelosi attended the game, she and Senate Majority Leader Charles Schumer met with Biden at the White House to talk strategy as infighting among Democrats could derail a trillion-dollar infrastructure package and a 10-year, $3.5 trillion budget to expand the welfare state.

Politico reported the trio spoke about how to salvage both initiatives.

Centrist Democrats and the party’s leftist wing cannot come to an agreement on how much more of the country’s future to spend away. Despite holding slim majorities in both chambers of Congress, reports indicate Democrats might not have the votes to advance either the budget package or the “infrastructure” bill.

Pelosi is reportedly facing pressure to get votes from Democrats in the House, while some House Democrats are placing the blame on Schumer.

The entire disagreement comes down to how much the party’s liberal wing wants to spend, versus how much more moderate lawmakers want to save.

The proposed spending reportedly has Democrats at each other’s throats, and Republicans unified against it:

The Democrats’ $3.5 trillion tax-and-spend spree is 67% higher than the $2.1 trillion spent by all 50 states combined in 2019. Let that sink in. pic.twitter.com/oyWKEKM9qa

The Associated Press framed the stakes for Democrats, should either measure fail to pass.

“[Democrats] need every Democratic vote in the 50-50 Senate and all but three in the House to succeed. Facing that arithmetic, public declarations of distrust for each other do little to promote the healing they’ll need to avoid sending the legislative essence of Joe Biden’s presidency down in flames, with potential long-term consequences,” the outlet reported.

Democratic Sen. Joe Manchin of West Virginia, a wild card with regard to some of his party’s ideas, has called the $3.5 trillion initiative “the definition of fiscal insanity.”

“What I have made clear to the President and Democratic leaders is that spending trillions more on new and expanded government programs, when we can’t even pay for the essential social programs, like Social Security and Medicare, is the definition of fiscal insanity,” Manchin, whose vote is critical for Democrats to get their way, said in a statement.

Wednesday’s game was a loss for Democrats. Republicans won 13-12, thanks in large part to a historic homer from Republican Rep. Greg Steube of Florida.

Perhaps Steube’s play, and the game’s outcome, are indicative of what might be on the horizon for the Democrats’ political future. When Democrats lose at anything, freedom-loving Americans are generally the benefactors.

They lost this year’s annual baseball game, and judging by Pelosi’s body language on Wednesday evening, it appears they’re also in danger of striking out on their socialist agenda.