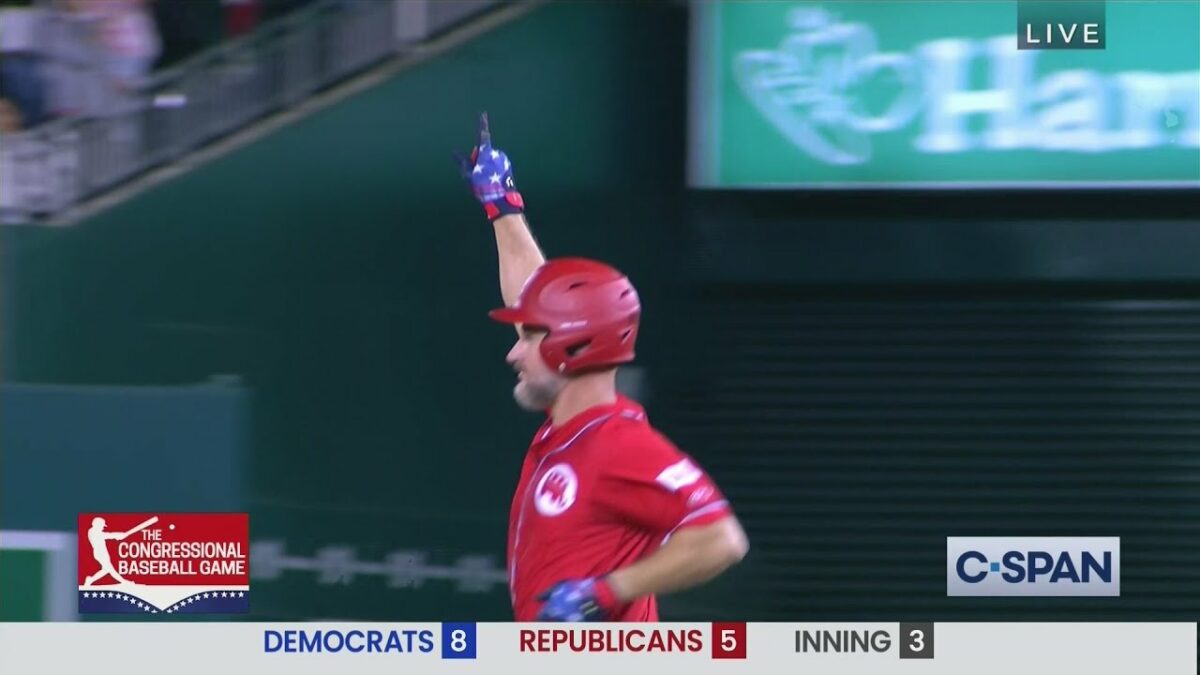 The following article, Republicans Down Dems in Congressional Baseball Game with Help of GOP Rep's Historic Home Run, was first published on Flag And Cross.

The annual congressional baseball game was a home run – literally – for a Trump supporter Wednesday night as GOP Rep. Greg Steube of Florida led Republicans to a 13-12 victory over Democrats.

Steube, who was the starting pitcher for the Republican team and went on to grab the win after pitching 5 2/3 innings, sent a third-inning pitch from Democratic Rep. Pete Aguilar of California into the stands at Nationals Park, home of Major League Baseball’s Washington Nationals.

The shot was the first homer into the stands since the game moved to the stadium in 2008, according to the New York Post.

The ball hit a railing and bounced back onto the field as Steube trotted the bases, accepting congratulations from members of both parties as he ran the bases.

“That was a bona fide, major league home run right there,” the C-SPAN announcer said.

The records show that then-Republican Rep. Ron Paul of Texas hit one out of the park during a 1979 game at Alexandria, Virginia’s Four Mile Run Park, according to Roll Call. Republican Rep. John Shimkus of Illinois hit a foul pole to record a homer in a 1997 game played at Prince George’s Stadium in Bowie, Maryland, according to the New York Post.

Steube wore a red “Save America” hat signed by former President Donald Trump as he pitched and, after 120 pitches, played third base and caught a pop-up to seal the GOP’s win, its first since 2016.

“This builds relationships, and creates a timeout from some of the harshest, I think, partisanship atmospheres I’ve seen in Congress. So I think in fact it’s probably needed now more than ever,” said Republican Rep. Kevin Brady of Texas, according to Reuters.

Brady has served in the House since 1997.

Partisanship did creep into the game when President Joe Biden made an appearance, with fans on the Democratic side exploding in cheers while fans on the GOP side responded with boos, according to the New York Post.

But mostly, it was baseball.

“What a great win,” said Minority Whip Steve Scalise of Louisiana, according to The Hill. Scalise had been practicing for the 2017 game between the two parties when he was the most serious victim of a shooting that took place at a GOP practice.

(The gunman in the Scalise shooting, a Bernie Sanders supporter, was shot by Capitol Police and later died.)

“Man it was intense — very close all the way through,” Scalise said.

“You need to do this every now and then, where you get away from the madness and come out and play the kid’s game in the big league ballpark,” Scalise said.

“You’re competing, and it was very intense competition. But we’re going to go back to work tomorrow, but it’s nice to just come and do something like this where you can build better relationships.”

Republican Rep. Barry Moore of Alabama said the win and the atmosphere were both welcome, given the partisan combat that occupies so much of life in the Capitol, according to The Hill.

“It was nice to play some baseball and then get to shake the Democrats’ hands, we don’t get a lot of that on the floor,” Moore said.