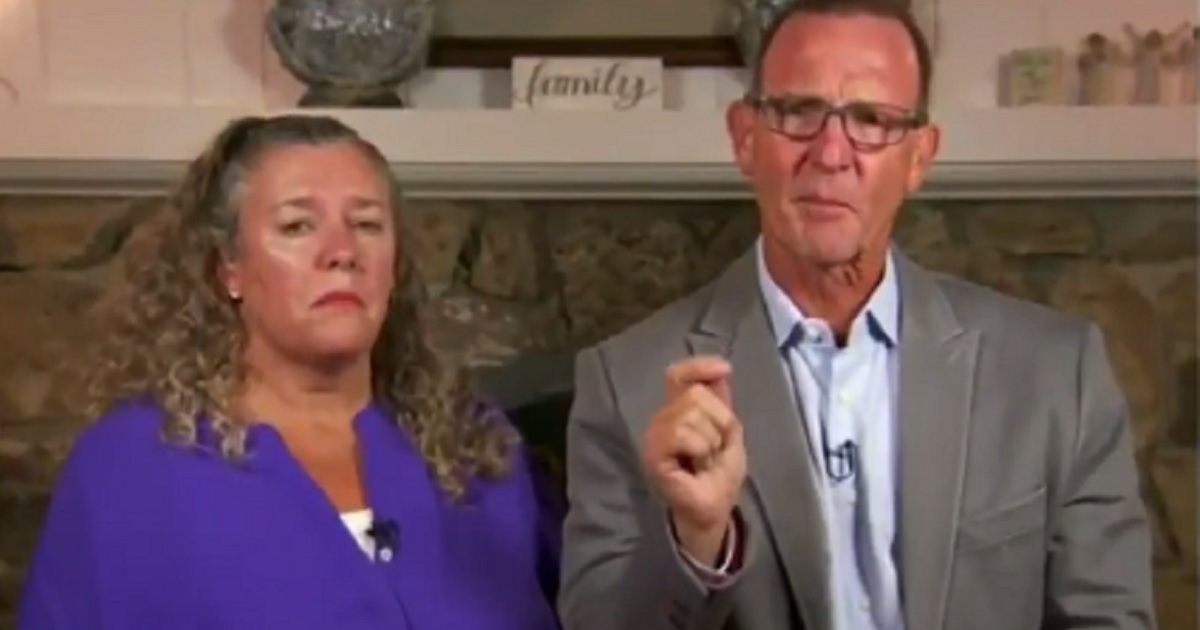 The following article, Mom of Marine Jailed for Speaking Out Against Afghanistan Debacle: 'They're Trying to Bury Our Son', was first published on Flag And Cross.

The parents of a Marine who has been jailed for calling out senior military leaders through a series of social media posts and videos say the rules their son broke are nowhere near as serious as the level of trust shattered by those above him.

In the aftermath of the Aug. 26 terrorist attack in Kabul, Afghanistan, that killed 13 service members and almost 200 Afghans, Lt. Col. Stuart Scheller released a video saying “People are upset because their senior leaders let them down, and none of them are raising their hands and accepting accountability or saying, ‘We messed this up,’” according to Task & Purpose.

Scheller is in the brig at Camp Lejeune, North Carolina, Marine Corps spokesman Capt. Sam Stephenson said, according to The Washington Post.

“The allegations against Lt. Col. Scheller are merely accusations. He is presumed innocent until proven guilty,” he said.

Scheller is accused of showing contempt toward officials, willfully disobeying a superior officer, failing to obey lawful orders and committing conduct unbecoming of an officer.

In addition to speaking out and naming names, Scheller posted on social media in violation of an order not to do so.

“They are trying to bury our son,” his mother, Cathy, said during a Wednesday appearance on “Tucker Carlson Tonight,” according to Fox News.

Tucker Carlson talks to the parents of imprisoned Marine Lt. Col. Stuart Scheller: “His crime was speaking truth to power, and power couldn’t handle it.” pic.twitter.com/Ad92GMIhXM

Cathy Scheller asked Americans “to pray, to contact your congressmen, and to donate.”

Carlson commiserated with the Marine’s parents.

“This is one of the worst stories I’ve ever seen in 30 years of covering this stuff,” he said.

“He knew this weekend when he posted again and he broke his silence that they were probably going to arrest him. He is a very intelligent man. He understands what’s going to happen to him,” Scheller Sr. said.

On Tuesday, Scheller Sr. told Fox News host Laura Ingraham that their son’s superiors “broke the chain of trust and confidence of the American people. For that, they should be embarrassed. They should resign for that,” in comments quoted by the U.K.-based Independent.

“He could not stand by and could not fathom the botched withdrawal from Afghanistan. He was asking for accountability, honest answers, and confessions of mistakes that were made,” his father said.

“They have turned their backs on him. They have tried to shut him up with a gag order, and when that didn’t work, they have put him in jail. It’s shameful.”

“We want them to resign and we want Stuart released. We would like him to have his pension reinstated and his hard-earned medical benefits that he will need after his many deployments. If they won’t do that, at least release him and let him out of the Marines.”

According to Task & Purpose, Scheller’s service record includes stints in Lebanon, evacuating Americans in 2006 during Israeli-Hamas fighting, time in Iraq as a company executive officer in 2007, and postings in Afghanistan.

His personal awards include a “Bronze Star Medal, a Combat Action Ribbon, an Army Commendation Medal with combat ‘V,’ and three Navy and Marine Corps Commendation medals, according to his service record,” Task & Purpose reported.

“I’m not saying we’ve got to be in Afghanistan forever, but I am saying: Did any of you throw your rank on the table and say ‘hey, it’s a bad idea to evacuate Bagram Airfield, a strategic airbase, before we evacuate everyone,’” he said.

Scheller said he thought risking his future in the Marines was worth it.

“I thought through ‘if I post this video, what might happen to me?’ especially if the video picks up traction, if I have the courage to post it. But I think what you believe in, can only be defined by what you’re willing to risk. So if I’m willing to risk my current battalion commander seat, my retirement, my family’s stability to say some of the things I want to say. I think it gives me some moral high ground to demand the same honesty, integrity, accountability from my senior leaders,” he said.

Continue reading: Mom of Marine Jailed for Speaking Out Against Afghanistan Debacle: 'They're Trying to Bury Our Son' ...