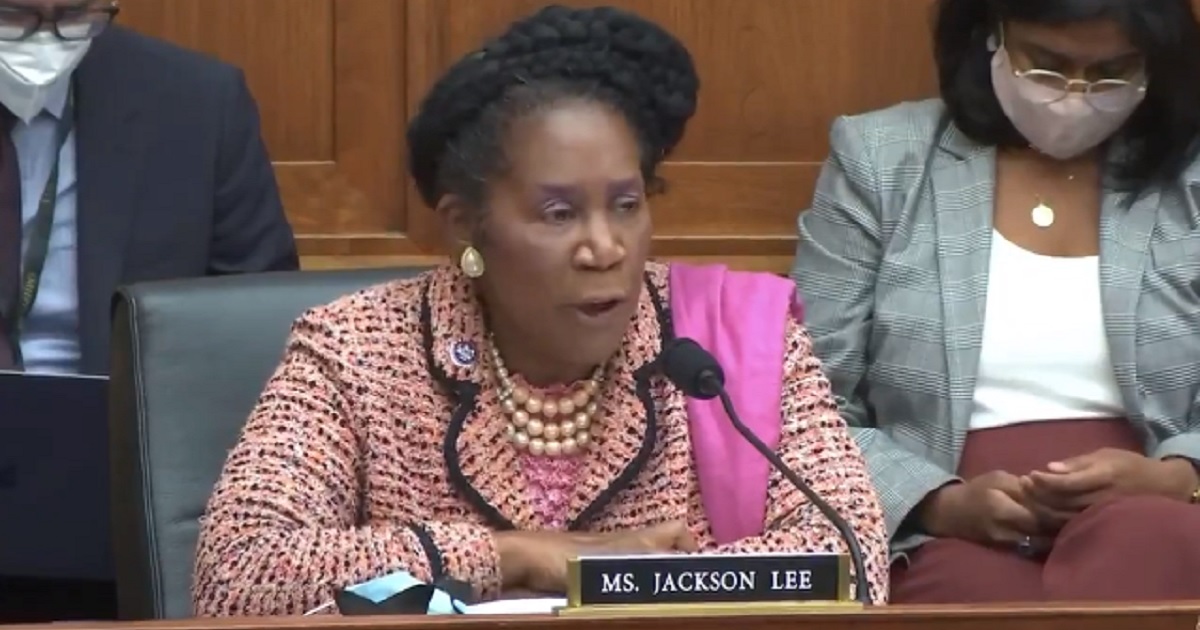 In a party known for mixing hardball politics with blatant dishonesty, outright liars are easy to come by — from Nancy Pelosi and Adam Schiff in the House to Chuck Schumer and Richard Blumenthal in the Senate.

But for sheer disassociation from reality, for Biden-level oblivion to the obvious, Rep. Sheila Jackson Lee of Texas has proved again that she’s difficult to beat.

Jackson, a Houston Democrat who’s spent a quarter-century in Congress — God help us — has a well-deserved reputation for spewing nonsense.

Her remarks can be merely stupid — like when she called for gun control while displaying her utter ignorance about what Democrats love to call “assault weapons.” They can be stupidly dangerous – like when she spread an unfounded story that a white man had murdered a young black girl in Houston two years ago.

But on Wednesday she veered into the land of lunacy during a House Judiciary Committee hearing, making a statement about the Biden administration’s border crisis that literally any thinking American knows to be flat false.

“Let me pronounce to my friends that the border is both sovereign and secure,” Jackson Lee said. “It is obviously subjected to biased and unfair narratives for political purposes.”

Rep. Sheila Jackson Lee says that the southern border is actually “sovereign and secure,” claiming that it is “subjected to biased and unfair narratives for political purposes.” pic.twitter.com/QSVLccryFj

If Jackson Lee considers the southern border secure, it’s difficult to imagine what insecure would look like.

Would a secure border be witnessing month after month of record numbers of illegal crossings? (The year’s total is projected to be about 1.85 million, according to the Washington Examiner, eclipsing a 20-year record set in 2000.)

Would a secure border require a state government to begin building a wall to defend its own territory because the Democrat in the White House has abdicated his responsibility to the country?

Would a secure border see thousands of illegal immigrants camping out under a bridge until a politically impotent administration allows them into the country — with a wink and a nod and the legal fig leaf of a future court hearing that all parties know will likely be ignored?

Obviously, the answer to those questions is no.

(Just ask the Border Patrol agents being railroaded for doing their jobs on spurious accusations of “racism.”)

Jackson Lee clearly doesn’t have much interest in the truth. But it’s entirely possible, given her long record of dubious statements, that she simply lacks the ability to grasp what the rest of the country is seeing.

Regardless, her comments were met with a blizzard of scorn on social media. Rarely has that kind of scorn been so well deserved.

We gotta do some drug testing….

So the pictures are not real…

“It’s a shame that people with such a level of ignorance get elected to the US Congress,” one Twitter user lamented.

It’s a shame that people with such a level of ignorance get elected to the US Congress.

Sounds like she is the one spewing “biased and unfair narratives for political purposes.”

It would be easy to just brand Jackson Lee a liar. After all, she’s a prominent member of a political party that has spent the entirety of the 21st century building its power on lies.

But her brand of untruth goes far beyond the usual Democratic dissembling to nearly being divorced from reality.

Baselessly accusing Border Patrol agents of “racism” is garden-variety leftist lying. It’s doubtful anyone truly believes it, but Democrats keep spitting it out and the establishment media keeps lapping it up. If some innocents happen to get hurt in the process, well, there’s a news cycle to “win.”

Claiming that a border plagued by chaos thanks to Biden’s embrace of illegal immigration is actually “sovereign and secure” is a distortion worthy of the doddering president himself.

A Democrat is going to be in the White House for the next three years. Fortunately, voters have a chance to kick Jackson Lee’s party out of power on Capitol Hill in next November’s midterms.

The entire border debacle — and Democratic lies and delusions about it — should be near the top of the list of targets for Republicans trying to retake Congress.

Jackson Lee’s seat is almost certainly safe, of course. She won re-election in 2020 with 73 percent of the vote. But it shouldn’t be.

Most of her Democratic colleagues aren’t nearly as safe. And they shouldn’t be, either.