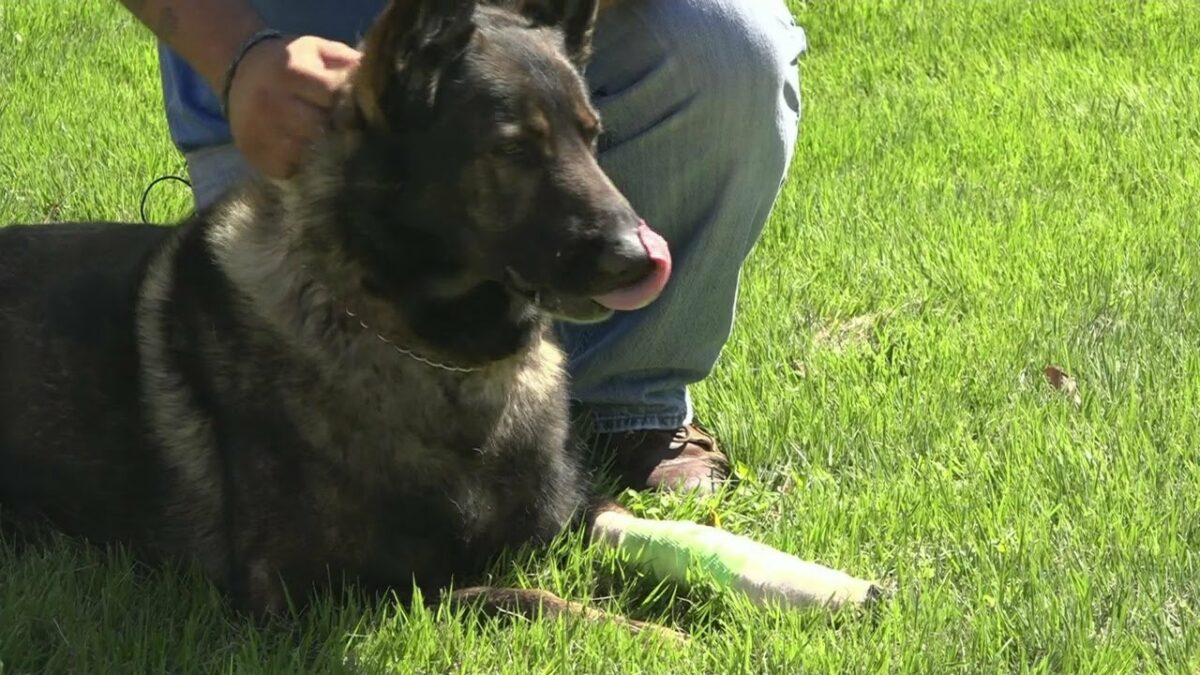 While he’s not technically a police K9, he has been through training to defend his home and is a top-notch good boy. As of Wednesday, he’s also earned the title of “hero.”

Canaday, who works with the Ferguson Police Department in Missouri, was off the clock and sleeping on Wednesday afternoon when he was startled out of his rest by a horrible sound.

“I mean, the worst scream I ever heard,” Canaday told KMOV. “It was a blood-curdling scream.”

“And I grab my robe, because I was in my underwear, and I go running out the door,” he continued. He grabbed his pistol, too, unsure of what he would find.

When he got outside, he saw his neighbor, Katherine Rose, being attacked by another neighbor’s dog in her own yard. Her son Reggie was smacking the dog with a broom, but it wasn’t fazing the dog.

Canaday didn’t want to shoot at the dog since it would endanger Rose and Reggie, so he ran back to his house.

“I came back to my front door, said, ‘Ozzie get him,’ and he knew exactly what to do,” Canaday recalled. “He went straight for that dog and he hit that dog full force, getting that dog to release her arm.”

The dog, whose name was Poncho, fought with Ozzie for a good 20 minutes. At some point, when Poncho’s owners came out and tried to pull him away, he was still seeing red and turned on them, biting one and causing serious damage.

“When Poncho first let go of Ozzie, he turned around and grabbed his own owner, bit his own owner in the calf,” Canaday said. “This dog is, is super aggressive, and why the door was left open … for him to get out, I don’t know.”

When the dust settled, nearly everyone involved needed medical attention. Canaday quickly got dressed and rushed his faithful dog to the veterinary hospital for care.

“He was bleeding badly from his front left paw,” Canaday wrote in a post on Facebook. “The Doctor at Ferguson Animal Hospital got him in immediately and went to work. Ozzie suffered a puncture in a main artery in his paw. He got stitched up, wrapped up, given meds, and was sent home with his proud Daddy to rest.”

Rose was taken to the hospital and is awaiting surgery for her mauled finger.

“I’m trying to stay strong but it’s so hard,” she said. “My finger’s ate up so bad that it’s deep down, close to the bone, to where I have to go to a surgeon.

“I’m alive. Thank God for Drew the police officer that stayed next door to me, and his dog. His dog saved my life.”

One of Poncho’s owners had to go to the hospital, too, and also revealed that they had put Poncho down following the incident. The owner, who didn’t want to be filmed, expressed gratitude for Canaday and Ozzie.

But no one is more proud of the canine hero than Canaday.

“Ozzie your Daddy loves you and is sooo proud of you!” he added on Facebook.

“You are a lifesaver! Let’s see the news give credit to an off duty officer in his underwear and his dog saving lives like it’s just another day.”