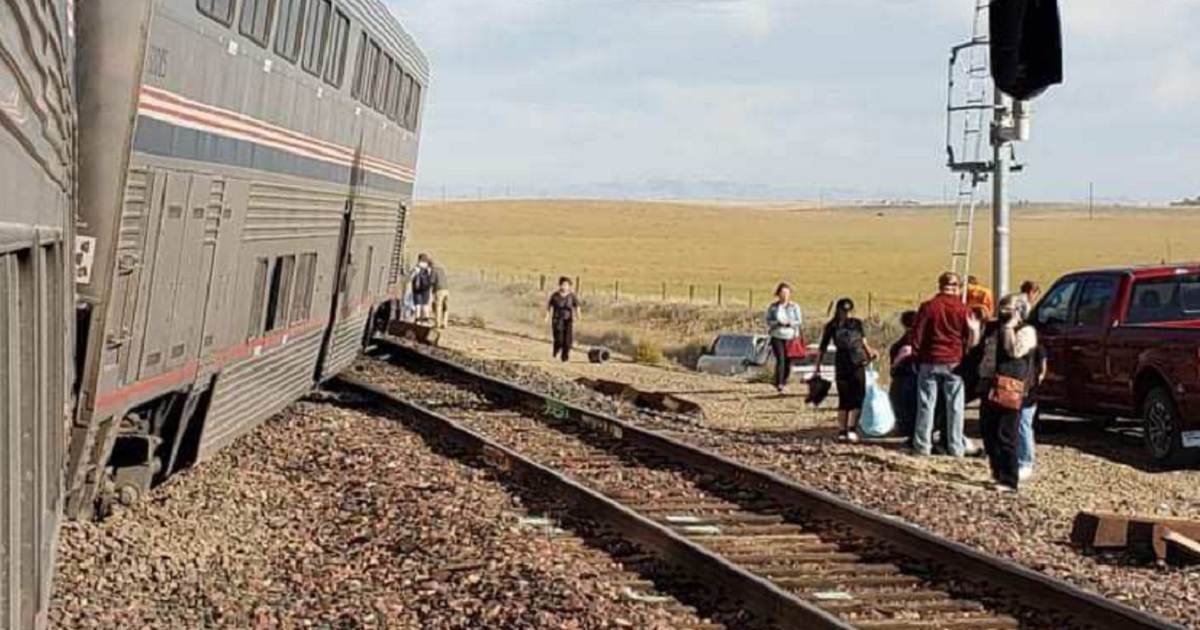 The following article, Disaster in Heartland as Amtrak Violently Derails, Multiple Casualties Confirmed, was first published on Flag And Cross.

An Amtrak train derailment in northern Montana has left at least three dead and 50 injured.

Amtrak said its Empire Builder train went off the tracks at about 4 p.m. Saturday near Joplin, Montana, according to the Billings Gazette.

The Chicago-to-Seattle train of 10 cars and two locomotives had 141 passengers and 16 crew members on board.

My mother-in-law shared these photos with me—the Empire Builder @Amtrak train they were on derailed near Havre, Montana. @AmtrakAlerts pic.twitter.com/6p7aksKdTF

Dave Ghekiere, chief of the volunteer fire department in nearby Chester, said he believed at least 15 people were hospitalized, according to NBC.

Passenger Megan Vandervest was napping in a sleeper car when the derailment took place, according to CNN.

“I would describe the experience as kind of extreme turbulence on an airplane but louder, and there was kind of a lot of smoke smell. The first thought I really had when I woke up was, ‘Oh my God we’re derailing,'” she said.

“It was probably 10 or 15 seconds of rocking back and forth and tons of noise, and then we came to a stop. Really we didn’t know what was going on for a couple minutes,” she said.

After being evacuated, she understood how close a call she had, according to The New York Times.

Her car was on the tracks, but carnage came after that.

The car behind hers was at an angle and the one behind that had tipped over.

The next three cars  “had completely fallen off the tracks and were detached from the train,” she said.

Amtrak passenger @MegVandervest was on the train in Montana when it derailed on Saturday. She says some survivors described a ‘gory’ scene in their coach cars.

At least three are confirmed dead. The train was heading from Chicago to Seattle. #amtrak #derail @AJEnglish pic.twitter.com/6z0HBTQlHe

Amanda Frickel, disaster and emergency services coordinator for Hill County, said rescuers from six adjoining counties responded and that five hospitals were on alert to care for the injured.

“Everybody who is alive has been extricated from the wreck,” Frickel said.

“Every county around is assisting,” said Sheriff Donna Whitt of Toole County.

The National Transportation Safety Board is investigating. No cause for the derailment had been determined as of Sunday morning.

“We are deeply saddened to learn local authorities are now confirming that three people have lost their lives as a result of this accident,” Amtrak said in a statement. “There are also reported injuries among the passengers and crew members traveling on the train. Amtrak is working with the local authorities to transport those who were injured to medical care, and to safely evacuate everyone else at the scene.”