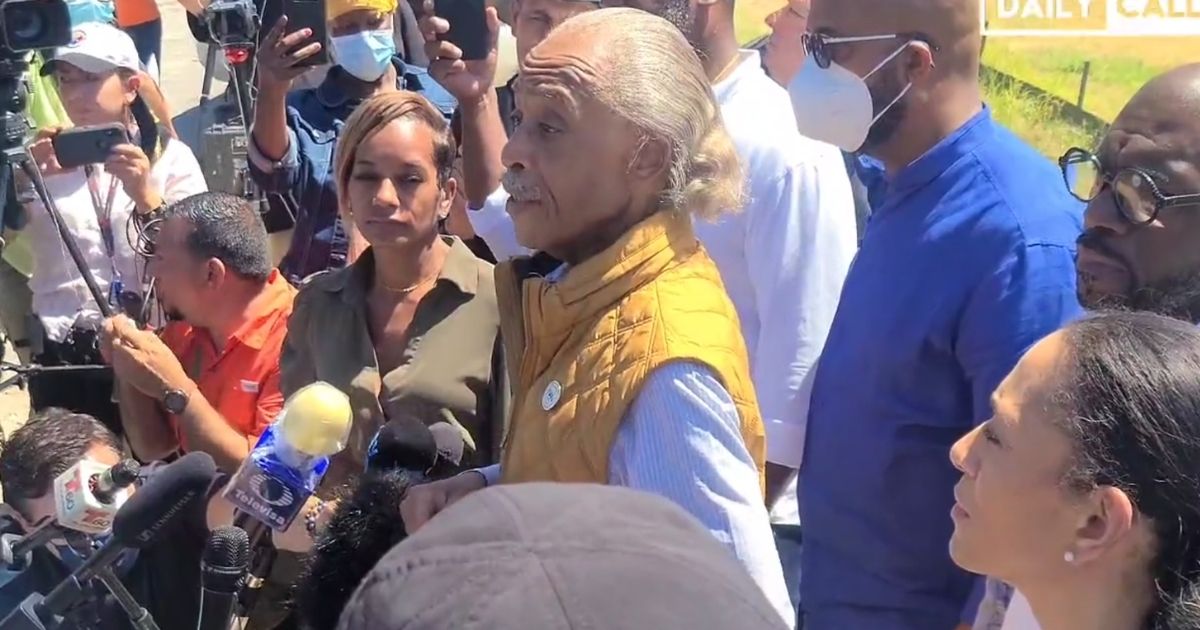 The following article, Watch: Al Sharpton's Border Press Conference Blows Up in His Face When Trump Supporter Shouts the Truth, was first published on Flag And Cross.

Hecklers at the southern border shut down a speech by race hustler and MSNBC host the Rev. Al Sharpton on Thursday near Del Rio, Texas, amid the Biden administration’s ongoing border crisis.

Illegal border crossers, mostly of Haitian descent, have gathered under and around the temporarily closed international bridge linking the U.S. and Mexico in recent weeks. Images from earlier this week showed how quickly crowds had swelled:

NEW: From our @FoxNews drone, a look at the migrant camp under the international bridge in Del Rio this morning, where thousands migrants remain after they crossed into the US illegally. pic.twitter.com/06sUY2XCi5

Sharpton inserted himself into the picture around lunchtime on Thursday, and he attempted to deliver some remarks. The stunt didn’t go well for him.

“Del Rio is a loving, caring community! We don’t want your racism in TX, get out of here!”

“Why are you stoking racism where it doesn’t exist?” one reported protester shouted at Sharpton. “Nobody wants to hear your racist nonsense in Del Rio!”

NEW: Rev. Al Sharpton was shouted down by protesters while trying to have a press conference here in Del Rio.

“Why are you stoking racism where it doesn’t exist? Nobody wants to hear your racist nonsense in Del Rio!” one protester said. @FoxNews

“We don’t want your racism in Texas, get out of here!” another person yelled. One shouted, “Get out of Texas!”

“We don’t want your racism in Texas, get out of here!” Trump supporter heckles Al Sharpton during his press conference outside the Del Rio international Bridge. Sharpton toured the Haitian makeshift camp under the bridge pic.twitter.com/0JGoWc7qyT

The yelling became so intense Sharpton ended his remarks and refused to talk to any reporters, KABB-TV reported.

While some migrants have reportedly been flown out of the country, and others allegedly set loose, there remain several thousand people huddled under makeshift shelters, according to KABB. The situation there is dangerous, unsanitary and a point of embarrassment for the country — which at this point doesn’t need any more shenanigans.

The one thing the Del Rio area didn’t need was Sharpton. Texans who live in the area are already forced every day to live in a community that has been turned upside down by President Joe Biden.

Sharpton’s visit was obviously not required, but Texans were asked to tolerate it anyway. They didn’t oblige him.

Sharpton had announced his border visit on Facebook on Thursday morning and said he and others would pray with migrants.

“A delegation of us are leaving Dallas FT. Worth in route to Del Rio, Texas where we will tour the encampment of Haitian refugees and pray with them,” he wrote.

Predictably, Sharpton was always coming to town to fan the flames of racial division. Sharpton on Twitter later commented on his visit, and mentioned those who heckled him. He proved them right when he inferred they were motivated by race.

He also attacked Border Patrol agents for being “brutal.”

Headed back from the Haitian encampment in Del Rio. It was heartbreaking. We must have a fair asylum policy 4 everyone. Some expected hecklers supporting the brutal Border Patrol guys showed up, I didn’t react. Their behavior underscores my point. This is about race and politics.

Right now, the southern border is the epicenter of a humanitarian and national security crisis. To say that politics have played a role in what people who live in and near Del Rio are dealing with is an understatement.

Those people are victims of the politics of the Democratic Party. Not many of them were in the mood on Thursday to be castigated by Sharpton and his brand of racial politics.