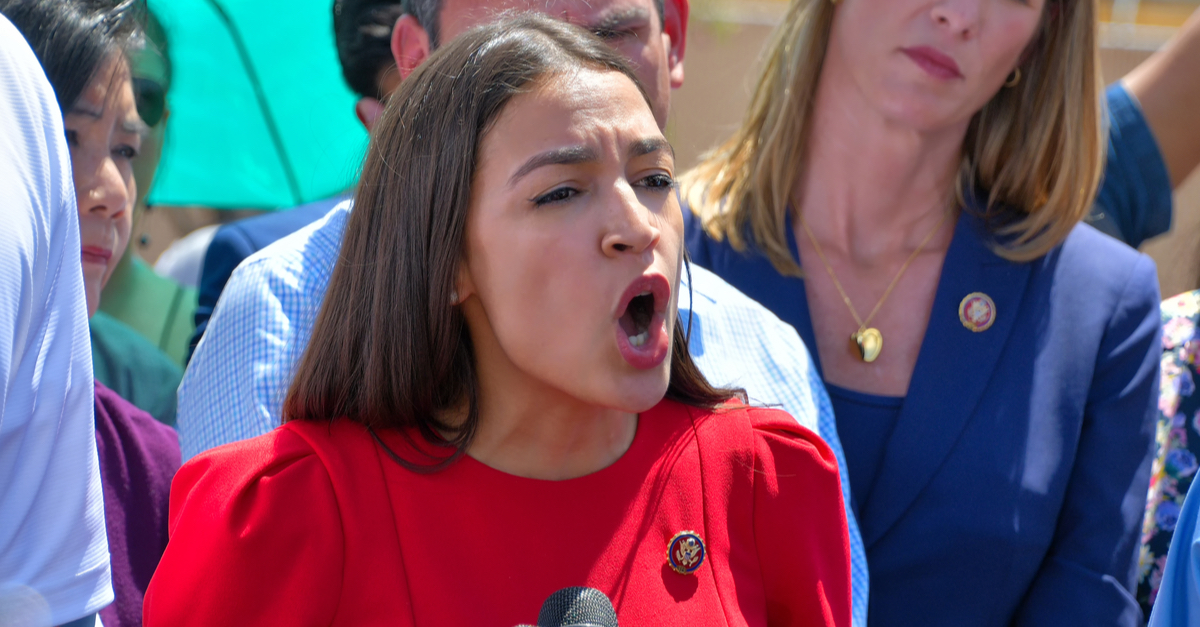 The following article, Meet the Top Twenty Anti-Israel Members of the House Democratic Caucus, was first published on Flag And Cross.

The news reports about the removal of the Iron Dome funding by the Democratic Party leadership blame The Squad. While the Squad was involved, what most people fail to recognize is the Democratic Party’s hatred of Jews and Israel is much broader than the squad.

Two days after Nancy Pelosi capitulated to the anti-Semites in the Democratic Party and removed the funding for Israel’s defensive Iron Dome system from a stop-gap spending bill, the House overwhelmingly passed a separate bill. The separate bill authorized the Iron Dome spending removed from the original bill. The separate legislation was designed to “cover” for the Democratic Pary lawmakers who advocated removing the Iron Dome funding from the continuing resolution that passed the House earlier this week.

This bill gave many of the anti-Semites in the party to a chance redeem themselves because this legislation would pass with or without their yes votes, so they could vote yes and explain to their fellow liberals they were only supporting the bill because their vote didn’t matter.

Republican Thomas Massie (R-KY) voted no also. Massie has a track record of anti-Israel and anti-Semitic votes and has been opposed by the Republican Jewish Coalition (RJC) when he ran for reelection. He proves that even a party that fights for Israel’s ability to protect herself and fights against Antisemitism can have a hater. It also proves that the RJC fights against haters no matter what their party (their Democratic equivalent supports anyone with a “D.” They even supported the anti-Semitic/ anti-Israel Barack Obama despite his hatred).

The list of Israel and/or Jew-haters in the Democratic Party goes far beyond the squad and even further than those who voted no or present to fund the purely defensive Iron Dome system.

Rep. Jamaal Bowman (D-NY) in his victorious campaign against incumbent Elliot Engle, Bowman, blasted Engle for his close relationship with Israel. In May 2021, he called for more restrictions on U.S. aid to Israel

Rep. Cori Bush (D-MO) called Israel apartheid and spoke of her solidarity with the Hamas “resistance.”

Rep. Andre Carson (D-IN) a no vote in the separate Iron dome bill. Carson is a supporter of the anti-Semitic BDS movement. He voted against H. Res. 246, a 2019 Resolution introduced by fellow Democrat Brad Schneider (D-IL) opposing efforts to delegitimize the State of Israel via the BDS movement.

Rep.James Clyburn (D-SC) is a supporter of the Jew-hating Louis Farrakhan. Clyburn told Farrakhan’s hate magazine “Final Call” that he was “not bothered in the least bit” by those criticizing him for appearing at the event with the Jew-hating Farrakhan. Since then, Clyburn has debased the Holocaust by using it as a political weapon, even slamming the children of survivors who objected to Rep. Omar’s Antisemitism.

Rep. Danny Davis (D-Il) A friend of the anti-Semitic Farrakhan. “The Daily Caller” reported that “Davis went on the record twice to defend and praise Farrakhan.” He called Farrakhan an “outstanding human being” and says he regularly visits Farrakhan, including at his home. Davis has also said he wasn’t bothered by Farrakhan’s answer to “the Jewish question.” In other words, his Antisemitism.

Rep. Antonio Delgado (D-NY) is not only supported by the anti-Israel group J-Street but has said he believes that Israel was not a democracy.

Rep. Jesus “Chuy’ Garcia (D-IL). I guess this particular Jesus never lived in Judea or Samaria. Chuy claimed that Israel “provoked” the Hamas rocket attacks. He may be right because the Hamas charter calls for killing Jews, and those darn Israeli Jews were still doing the provocative act of breathing.

Hank Johnson (D-GA) called Jews termites before Farrakhan did. At an event at the 2016 Democratic Convention, Johnson, who once worried that too many people on the island of Guam might tip it over, called Jewish people who live in disputed territories “termites” that destroy homes. Johnson said it at an event during the 2016 Democratic Convention.

Rep. Alexandria Ocasio-Cortez (D-NY) was one of the driving forces behind taking out the finding. She once claimed she had a Jewish background (thank God not it’s not true), smeared Israel with the false charge of Apartheid State. Not only a lie, but Arabs have more rights in Israel than they would have in Gaza or any of the Arab States. After she switched her vote on the stand-alone bill to not present, she cried. AOC must have been so sad that fewer Jews would die because Israel would be able to block terrorist rockets targeting civilians.

Rep. Ilhan Omar (D-MN) got in political trouble when she made anti-Semitic comments in 2019. Her Democratic colleagues were going to pass a condemnation, but the CBS objected. Pelosi capitulated and passed a resolution that basically said Antisemitism doesn’t matter. Omar claims that Israel uses “the guise of self-defense” when defending itself from Hamas’ rocket attacks. Just before the stand-alone vote, she tweeted, Given the human rights violations in Gaza, Sheikh Jarrah, and ever-growing settlement expansion, we should not be ramming through a last-minute $1 billion increase in military funding for Israel without any accountability. Proving that she has no understanding that Israel pulled out of Gaza 16 years ago, Sheikh Jarrah is a landlord-tenant dispute, and most of the “expansion” is more houses in the same communities.

Rep. Jim McGovern (D-MA) has demanded that Israel negotiate with Hamas despite Hamas’ continued terrorism, firing rockets into Israel, and Hamas’ refusal to recognize Israel as a Jewish state. Based on the Hamas charter, the only thing Israel can deliver to make the terrorist group happy is the deaths of all the Jews in the country. But McGovern doesn’t care.

Rep. Marie Newman (D-IL) Jews have the same reaction to her as Seinfeld reacted to his mailman. Rep Newman signed a letter calling on the Biden administration to condemn Israel’s illegitimate use of force in Jerusalem. In other words, allow the protesters to kill civilians.

Rep. Nancy Pelosi (D-CA) Not an anti-Semite or anti-Israel—just a political hack. Two years ago, she watered down a resolution to condemn Antisemitism because the CDC told her to. Two days ago, she folded on the Iron Dome because she faced opposition from her anti-Israel base. Earlier in 2021, she drew a moral equivalence between the attacking terrorist Hamas and Israel, defending herself with this statement, “Now, after more than a week of hostilities, it has become even more apparent that a ceasefire is necessary. There must be a serious effort on the part of both parties to end the violence and respect the rights of both the Israeli and Palestinian people.

Rep. Mark Pocan (D-WI) was one of the Democrats who pressured Pelosi to remove the Iron Dome funding from the original bill. Pocan blamed Israel for Hamas’ acts of terror, claiming that just because Hamas is attacking Israel “doesn’t make it a both sides issue.” In the past, Pocan had reserved official Capitol Hill space to host a forum supporting the anti-Semitic BDS movement.

Rep. Ayanna Pressley (D-MA) also pressed Pelosi to drop the Iron Dome funding in the original bill. In 2021 said the Hamas attacks on Israel were a consequence of years of military occupation. Maybe someone stole her newspaper in August 2005 when Israel pulled out of Gaza.

Rep. Adam Smith (D-WA) Introduced a one-sided bill to “prohibit U.S. assistance to Israel from being used to support the military detention, interrogation, or ill-treatment of Palestinian children in violation of international humanitarian law” Nowhere in the bill did he mention terrorism out of Gaza the thousands of rockets coming out of Gaza into Israel, or the reason the Palestinian “children” were arrested.

Rep. Rashida Tlaib (D-MI) advocated for the anti-Semitic Boycott, Divestment, and Sanctions (BDS). At the same time, Israel was being bombed and claimed that Israel was ‘promoting racism and dehumanization’ under an ‘apartheid system.’

Rep. Maxine Waters (D-CA) has said she believes the anti-Semitic canard that AIPAC has too much power over congress. Sorry Maxine, but if AIPAC had all that power, as you claim, your anti-Semitic ass would have been out of Congress years ago.

As you can see, the hatred in the Democratic Party House Caucus goes well beyond the squad. Just as bad as the haters above are the House Democrats, whose silence allows the Israel and Jew-hatred in the party to continue. For example, Rep. Jerold Nadler (D-NY) is not anti-Semitic, but he protected Ilhan Omar when she made anti-Israel and anti-Semitic comments claiming she was the victim of a GOP smear. As for the latest Hamas attacks and this week’s Anti-Israel votes by his party Nadler has been silent. But it may not be his fault. He often wears his pants up so high that his belt may be constricting the oxygen to his brain. Either that or he’s too busy working on the February 2022 third annual Democratic Party impeachment of Donald Trump.

But that is a story for another day. As is the story of Democrats in the Senate who are anti-Semites or anti-Israel.