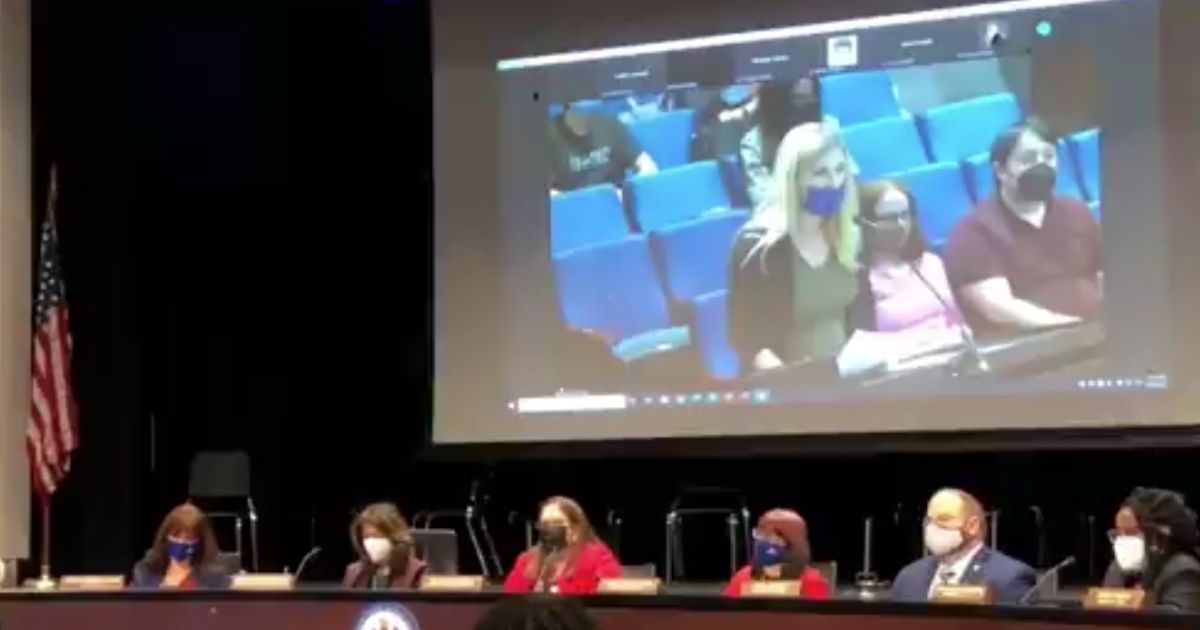 It appears Fairfax County Public Schools in Virginia has been disseminating pedophilic pornography to its students.

As much was revealed by author and former journalist for The Wall Street Journal Asra Nomani, who attended a local Fairfax County School Board meeting Thursday night.

During the meeting, Fairfax High School mother Stacy Langton brought two books up to the podium, along with printouts of some of their pages. The books were “Lawn Boy” by Jonathan Evison and “Gender Queer” by Maia Kobabe.

Langton said she found the books in the high school library, the Robinson Secondary School library and at others across the county.

“The books were available, and we checked them out,” the mother said, according to Nomani’s report.

Nomani recorded the school board meeting, as well as the contents of the books, in a video posted to her Twitter.

Given the incredibly pornographic nature of the images (comic-style pictures showing individuals performing sex acts on one another), we will not embed the video in this story.

If you do wish to see how truly horrific the content is, you can view Nomani’s video here.

The books don’t just show any kind of pornography, however.

They appear to show drawings of child pornography by depicting acts of pedophilia.

One book even includes a “fourth-grade boy performing oral sex on an adult male,” Nomani reported.

In “Lawn Boy,” the author describes performing such an act for the first time at the age of 10.

This is the type of material a pedophile would use to groom his victims, making them read it as a way of normalizing explicit sex acts.

And the Fairfax County school district allegedly made these books available to “minors as young as seventh grade, or as young as 12 years old.”

The school board chair, Stella Pekarsky, attempted to defend the inclusion by claiming one of the schools they were found at was made up of “high school students.”

Nomani noted in her report that Robinson Secondary School, where Langton said the books were also available, “includes seventh and eighth graders.”

Either way, it likely doesn’t make parents feel much better knowing that their high school children may have been and possibly continue to be exposed to this horrific content.

According to WRC-TV, Fairfax County Public Schools said it would temporarily remove the books from the library. At a later date, they will be reviewed by a committee of students, staff and parents for a final decision.

For years, conservatives have been saying that the sexual-freedom-movement left’s ultimate goal is to sexualize children and they’ve been called crackpots for saying so.

Well, who are the crackpots now?

Stories continue to break revealing content developed and written by pro-LGBT authors such as this being disseminated to young children.

Minnesota’s Richfield Public Schools district was also caught this week using a sexual education program that has children role-play as sexually active gay teenagers deciding whether or not they want to have sex.

Modern-day leftists have taken over the public school system.

And, if you let them, they’ll use that power to sexualize America’s children with pedophile-esque grooming techniques.

The worst thing I saw in that video was not one, but two Police officers that were obviously derelict in their duty because they did not arrest the entire school board. They swore an oath to arrest criminals. And that entire school board is exactly that for allowing those books showing pedophilia in the schools libraries.