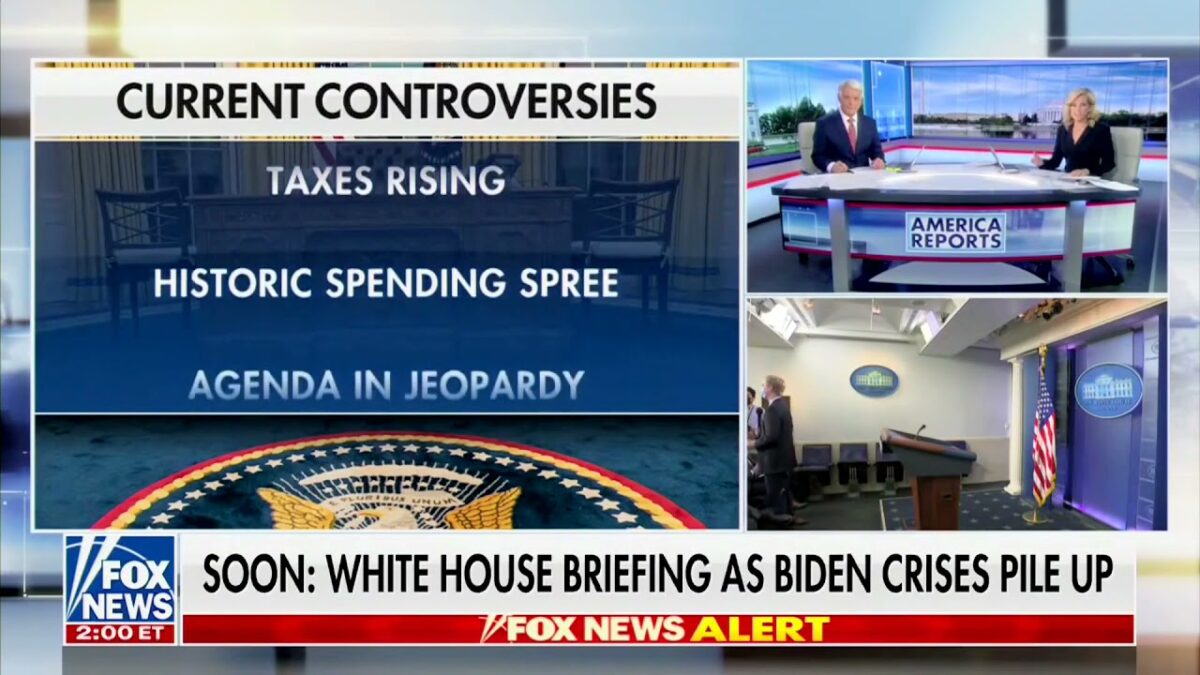 The following article, Fox News Runs Devastating List of Every Single Current Biden Controversy, It's Worse Than You Think, was first published on Flag And Cross.

Fox News on Wednesday ran a scroll listing the many controversies plaguing the Biden administration during its eighth month, and the moment really put things into context.

Not that we didn’t already know our country has descended into complete chaos. That much has been obvious for some time. It’s everywhere you go, actually.

Grocery stores, gas stations, airports and the passable portions of the country’s southern border are all reminders of how terrible President Joe Biden has been for America.

Walk by a TV, though, and the larger picture comes into focus.

That was especially true on Fox News when “America Reports” anchors Shannon Bream and John Roberts rolled out a list of the ongoing crises, tragedies and other disasters plaguing the country and its inept leadership.

“It’s been eight whole months, but it looks like the honeymoon is over,” Bream said while Fox viewers were reminded of the many failings of the Biden administration.

A graphic displaying “current controversies” scrolled upward as the pair commented on the 18 different issues the network had keyed in on. Bream declared that not even the “mainstream media can ignore” all the trouble.

Those troubles include reports that thousands of Haitian migrants who have been camped out along the border in Texas are being released into the country. That occurred after the White House assured that no such thing would happen.

Roberts then noted that Biden was “getting called out for not calling out China by name at the United Nations” when he addressed the global body this past week and managed to make no mention of the world’s largest human rights abuser.

Fox’s scrolling Biden crisis graphic reminded viewers that while they face being treated as second-class citizens if they’re not vaccinated against the coronavirus, no such mandates exist for people who are literally breaking the law by being in the country.

It also pointed out Biden’s mixed messaging about COVID-19 booster shots, which are now not being recommended for the general population by the Food and Drug Administration. Biden sure stopped talking about that subject quickly.

The adults are back in charge, right?

The current administration has managed to anger France, the country’s oldest ally, while also moving to leave the Israeli people vulnerable to attacks from Hamas terrorists.

In case anyone had forgotten that the U.S. military surrendered full control of Afghanistan to the Taliban last month, Fox’s crisis meter reminded them.

That’s all going on, and we can expect, any day now, a capitulation to Iran over nuclear weapons. It feels like a matter of time before pallets of cash start landing in Tehran.

There was also present on Fox’s list the fact that not one single person in the White House or the president’s Cabinet has claimed responsibility for a drone strike in Kabul that killed seven children. There has also been no accountability over the fact that the Pentagon left American citizens behind in Afghanistan as troops were ordered out.

Labor shortages, rising prices on basic commodities and high gas prices are all still with us as domestic issues to remind everyone just how bad the Democratic Party’s ideas are.

The opening segment from Bream and Roberts on Wednesday served as a sobering reminder of just how much trouble this country is in. Simultaneously, it somehow also failed to capture the magnitude of the situation.

The good news: There are just under three and a half years left of this madness — if we’re lucky.

The problem is, people that need to see this information never will. The mere idea of watching Fox News or ANY news agency not fitting their narrative will not be considered. Their minds are made up, nothing will change that, they can actually see an event taking place and either deny it happened or why is happened. You cannot fight ignorance at this level, they have been brainwashed to long.