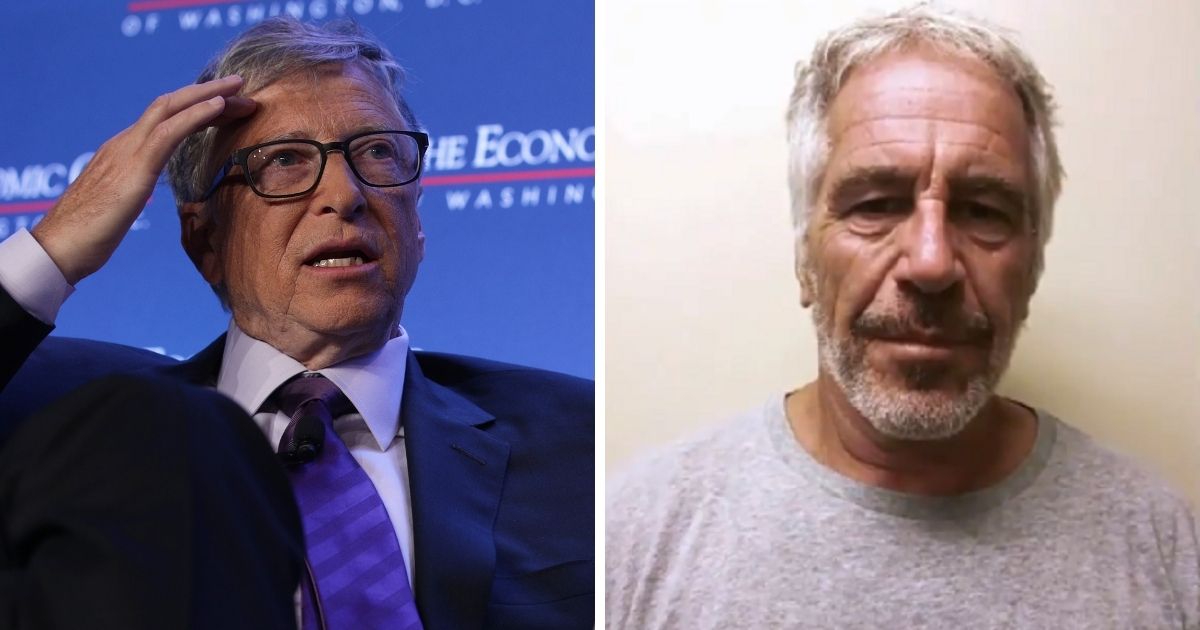 The following article, Watch: Bill Gates Squirms on Camera When Asked About Epstein Relationship, was first published on Flag And Cross.

Tech billionaire Bill Gates appeared extremely uncomfortable when he was asked about his prior relationship with deceased sexual predator Jeffrey Epstein during an interview this week.

The entire saga involving Gates and Epstein is bizarre. More than two years after Epstein’s death, Gates either can’t or won’t offer a clear explanation as to why the two spent so much time together, other than to describe their relationship as being one that could have furthered his philanthropic goals.

Gates was no clearer about his ties to Epstein on Tuesday when he was asked about it on “PBS NewsHour” by anchor Judy Woodruff. In fact, the billionaire appeared evasive and squirmy.

WATCH: @JudyWoodruff asks Bill Gates about his meetings with Jeffrey Epstein a decade ago, after Epstein had already been convicted of sex crimes.

“Those meetings were a mistake,” Gates says. “They didn’t result in what he purported and I cut them off.” pic.twitter.com/7gg9osnzpu

Epstein had “relationships with people he said, you know, would give to global health, which is an interest I have,” Gates said, as he fidgeted with his hands and an empty ring finger. “Not nearly enough philanthropy goes in that direction.”

“You know, I had dinners with him,” Gates also stated. “I regret doing that … They didn’t result in what he purported and I cut them off.”

Gates appeared in a hurry to turn the page on the subject.

“You know, that goes back a long time ago now, so there’s nothing new on that,” he said.

Woodruff wasn’t in any hurry to let the topic go, noting that meetings between Gates and Epstein “continued” over a period of “several years,” as has been widely reported.

“Is there a lesson for you, for anyone else, looking at this?” she also asked him.

A clearly frazzled Gates responded: “Well, he’s dead, so… You know, in general, you always have to be careful.”

Gates of course came to prominence in the mid-1980s, and went on to become one of the richest men on the planet. In the years that followed, he courted a relationship with Epstein, per reports. His meetings with the financier and alleged child sex trafficker might or might not have derailed his marriage.

The Daily Beast reported in May: “Bachelor sex-offender Jeffrey Epstein gave Bill Gates advice on ending his marriage with Melinda after the Microsoft co-founder complained about her during a series of meetings at the money manager’s mansion, according to two people familiar with the situation.”

“The billionaire met Epstein dozens of times starting in 2011 and continuing through to 2014 mostly at the financier’s Manhattan home—a substantially higher number than has been previously reported,” the report added. “Their conversations took place years before Bill and Melinda Gates announced this month that they were splitting up.”

The outlet also reported that Gates’ relationship with Epstein was apparently close enough that the tech geek felt comfortable enough to give the now-dead sexual predator life advice.

“Gates, in turn, encouraged Epstein to rehabilitate his image in the media following his 2008 guilty plea for soliciting a minor for prostitution, and discussed Epstein becoming involved with the Bill and Melinda Gates Foundation,” The Daily Beast reported.

None of Gates’ answers about Epstein have given us much insight with regard to why one of the world’s wealthiest men would ever give a convicted deviant the time of day.

It’s a mystery, despite endless speculation with no concrete answers, why or how Epstein ever managed to court so many high-profile friendships — with people such as Gates and former President Bill Clinton.

Something remains wrong with this entire picture two years after Epstein reportedly took his own life in a federal prison cell in Manhattan.

Gates’ PBS interview certainly didn’t clarify anything. After witnessing his body language from the interview with PBS, we can probably all assume there is much more to the story than Gates would ever like to divulge.