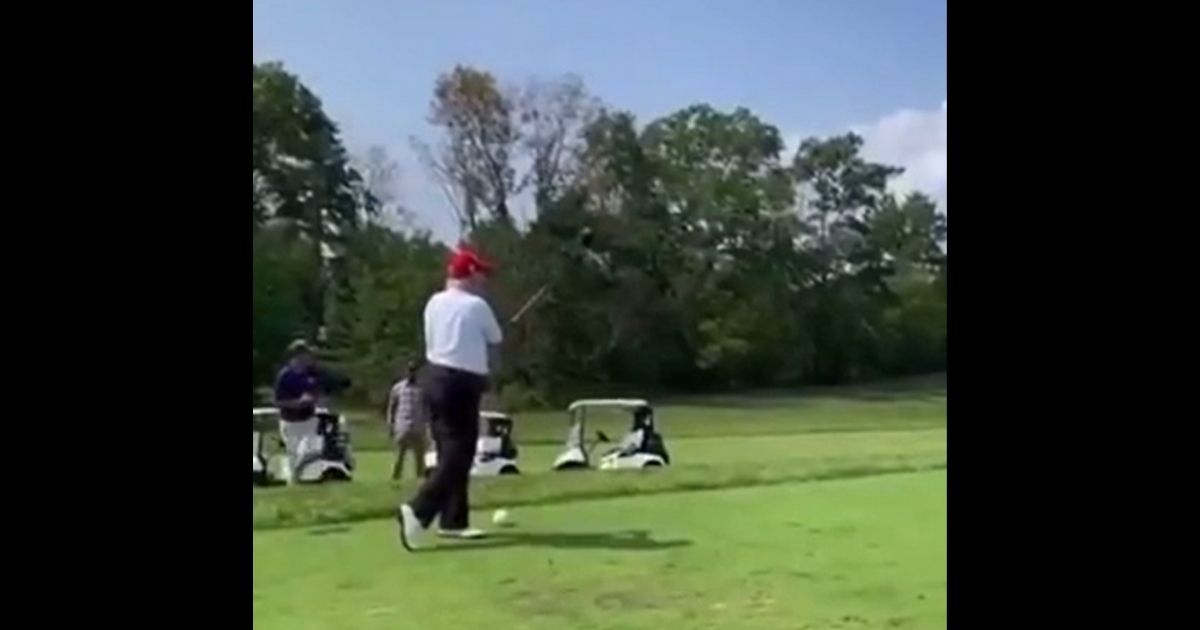 The following article, Trump Savages Biden As Soon As He Finishes Golf Swing: 'You Think Biden Can Hit a Ball Like That?', was first published on Flag And Cross.

Much to the chagrin of his vehement critics, former President Donald Trump has no intention of going anywhere — and what’s more, he’s still got all the energy and zest for life that put his 2020 rival to shame.

While Trump’s 2020 rival, of course, is the one residing in the White House and leading our country (if one can call it that), the comparisons between the two men are hardly favorable to now-President Joe Biden, at least when youthfulness, energy and general coherence are the factors being considered.

This was obviously on the former president’s mind in the midst of what appears to have been a particularly good golf game he played this week as captured in a clip shared on social media on Wednesday.

In the video, Trump hit what the enthusiastic comments of onlookers indicated was a very nice drive and celebrating by asking his companions, “You think Biden can hit a ball like that?”

“He couldn’t get it past the first tee!” Trump added, as someone could be heard suggesting that Biden would “forget where he hit it!”

The comment, of course, is classic Trump. He made a similar quip ahead of an exhibition boxing match earlier this month between Vitor Belfort and Evander Holyfield when he was asked who he’d like to take on in the ring.

Wisely opting to skip the professional boxers, the former president suggested he could easily take on Biden, who he predicted would “go down very, very quickly.”

The thing is, while Trump has always loved throwing these kinds of jabs, whether in the White House or not, none of them is remotely necessary — Biden’s job performance and general appearance and behavior in public alone scream the unfavorable comparison between our former and current presidents.

Earlier this year, Biden did indeed go down very easily — not while boxing his former rival, but while merely boarding Air Force One, which presented itself as too arduous a task for the oldest sitting president in U.S. history at 78.

President Biden stumbles while walking up the stairs to Air Force One
pic.twitter.com/t959EPMHpu

It’s easy enough to target Biden’s age, but the thing is, Trump is only three years younger. And yet he never fell asleep in public, lost his train of thought countless times, stumbled while going up stairs or was kept sheltered from the press.

Trump loved talking to anyone who would listen, and one has to admit — regardless of whether you approve or disapprove of his combative, unorthodox manner of speech — he was always quick on his feet while doing so.

He was ready with quick, biting retorts to reporters and debate opponents (and moderators, for that matter), and even had sneaky little quips while meeting with his foreign counterparts.

And how many times did he stop and talk to the press pool while leaving the White House, shouting over the whirring propellers of Marine One, taking all their questions while taking every opportunity to trash their coverage of his presidency?

Biden, on the other hand, after being kept in his basement for almost the entirety of his presidential campaign, was carefully sheltered from the media for months before he gave his first solo news conference as president. And when he finally did, he seemed to have brought with him notes and cards to help him identify reporters and answer their questions.

Meanwhile, he’s been seen being herded away from the media by his handlers, even when he appears, however feebly, willing to answer their questions.

This is understandable when you consider that this is what often happens when he does make comments in public:

President Biden calls on states/localities that have lifted mask mandates to reinstate them:

“This is not politics. Reinstate the mandate if you let it down.” pic.twitter.com/phZUOtM7Oa

And he’s made it painfully apparent that someone doesn’t want him talking to the media too much:

According to the book “Peril” from Washington Post journalists Bob Woodward and Robert Costa, Trump staffers described this exerted effort to keep Biden away from the press as “the wall.”

Very serious and frequent concerns have been raised about Biden’s cognitive health, which, when you consider the panicked behavior of his aides and an admission from his own press secretary that he probably shouldn’t be talking to reporters on his own, leads one to wonder: If our own president is so incapable of carrying out some of the basic tasks that go along with being commander-in-chief, who is really running the show?

So no, to answer Trump’s question, I don’t think Biden could hit a ball like that. There are a whole lot of things that he simply can’t do as well as Trump could, or as well as any normal, healthy, energetic person.

The scary thing is, Biden’s the one leading our country — supposedly.

Continue reading: Trump Savages Biden As Soon As He Finishes Golf Swing: 'You Think Biden Can Hit a Ball Like That?' ...