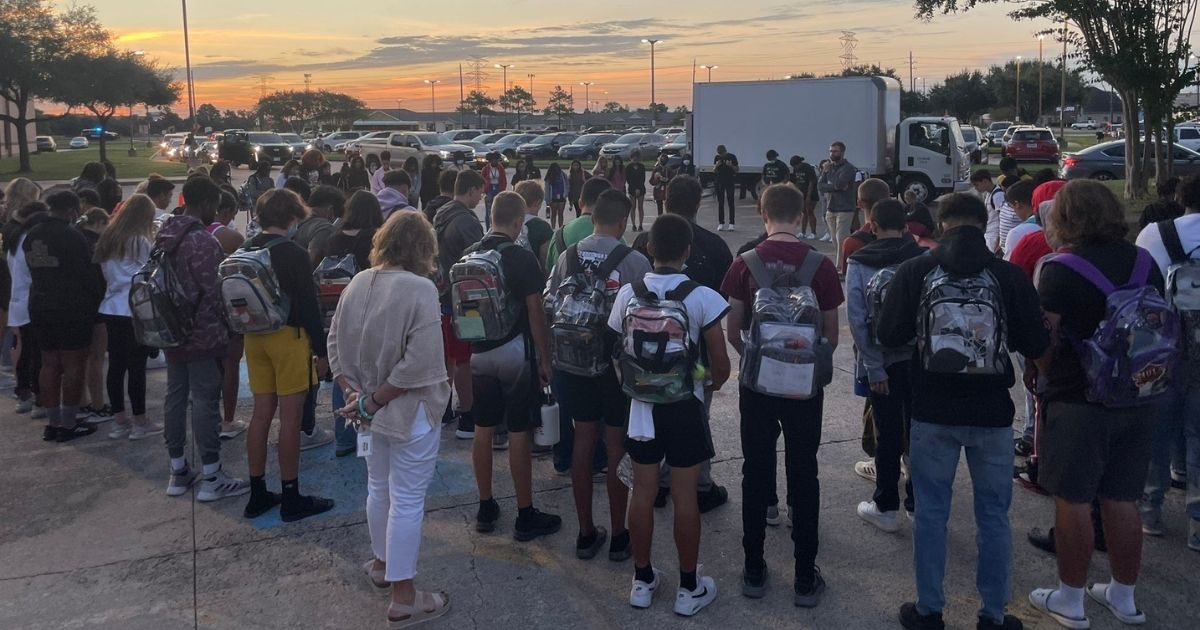 The following article, Thousands of High School Students Across the US Bow Their Heads to Pray in Unison, was first published on Flag And Cross.

In groups large and small, with thoughts said aloud and others held close in silence, America’s students began Wednesday in prayer at the annual “See You at the Pole” event.

As noted by CBN News, this was the 21st year of the student-led event, which takes place around the world at school flagpoles in the morning before classes begin.

This year’s theme came from the New Testament:

Humble yourselves before the Lord, and he will exalt you. – James 4:10

At Croatan High School in North Carolina, about 25 students gathered to pray, according to the Carteret County News-Times.

“There is just so much going on in our country and in our leaders. It’s so important that we pray for our country,” freshman Faith Eilertson said. “The leaders need wisdom because they are facing so many situations.”

One student noted the importance of prayer at this time.

“We need to gather around and pray because this country has done so much for us. I’m praying for the students and the country. I’m praying for our military because of Afghanistan,” freshman Brody Weihrauch said.

In Pikeville, Kentucky, students at Shelby Valley High School gathered together to pray.

“It makes me feel like I have a connection to everybody in this room, or everybody in the circle while I’m praying,” Collier Fuller, a sophomore, said, according to WYMT-TV.

At Tyler Legacy High school in Tyler, Texas, about 200 students gathered, according to KLTV-TV.

“I would like to say that this very much impacts the school. I want people to understand that we care about each other. We actually are praying for you,” said Jaren, a senior.

Christians from around the country shared images from their schools.

This morning, we gathered together across the country to stand in prayer and glorify God! Thousands of students stepped out and shared their faith in their schools. #SYATP

Some of our JBMS students chose to participate in nationally recognized See You At the Pole. #BeBOLD #syatp pic.twitter.com/LcLhCRP4LB

Beautiful sunrise for FCA’s “See You At the Pole” this morning.

What an AWESOME morning for Byrnes FCA and See you at the Pole!!! Thank You Coach Henderson for the great words!!! pic.twitter.com/auGOqMDf1T

At Copperas Cove High School in Copperas Cove, Texas, student-athletes were given a break from football practice and went to pray in their uniforms with about 100 other students, according to the Killeen Daily Herald.

“It makes me feel a lot closer to them, to be honest,” football player Aleczander Patterson said of having his teammates attend the event. “I know a lot of them probably have struggles in their life that probably they need to ask God for … it just means a lot to see them open up like that and show who they are.”

Senior football player Caleb Newberry, who led the event with Patterson, said it was an opportunity to spread God’s word and connect with others in prayer.

“It meant a lot, just so I could be able to serve God and spread the message of Christ and just be able to build connections with other people,” he said.

Wednesday marked See You at the Pole, a student-initiated, student-organized and student-led movement of prayer that happens annually on the fourth Wednesday of September. https://t.co/XvmtnzRn6p

Newberry said his Christian upbringing “keeps me in the Word, just to be able to read and to learn, to pray and ask for understanding.”

Continue reading: Thousands of High School Students Across the US Bow Their Heads to Pray in Unison ...