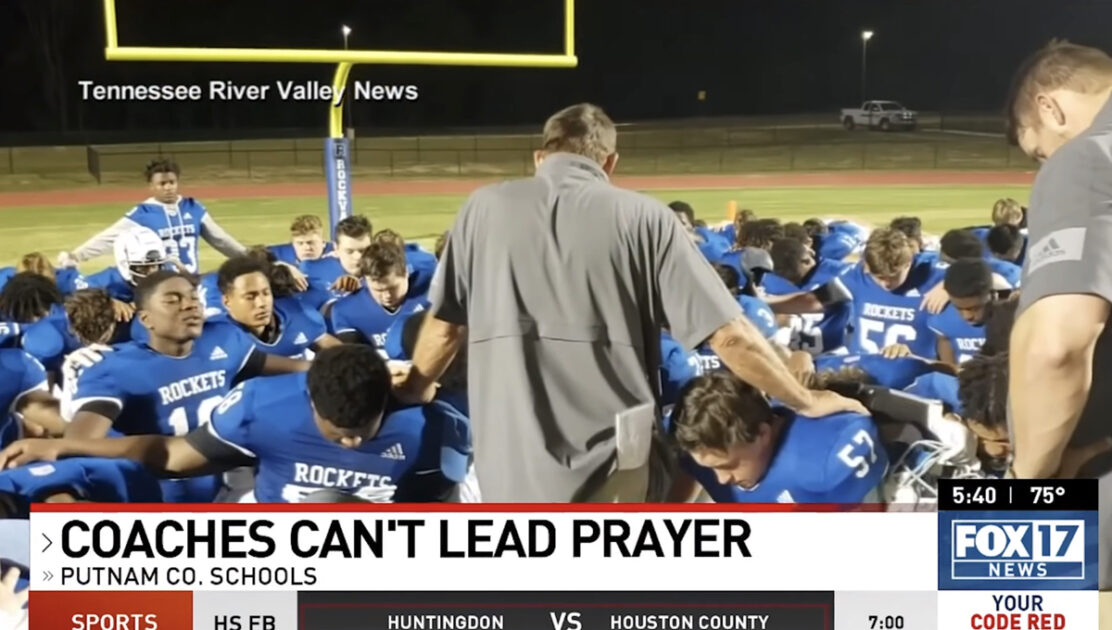 The following article, High School Football Team Thumbs Nose at Wokeness with Team Prayer on Field, was first published on Flag And Cross.

A high school football team in Tennessee took a stand against the school district’s edict outlawing religious freedom and decided to hold a team prayer right on the field last week.

The Putnam County School District jumped into action a week ago to inform its schools that religious observance is illegal on school properties, Fox 17 reported. The edict to quash religious freedom issued by district officials came on the heels of reports that student athletes and coaches at Cookeville and Upperman high schools had been seen engaging in prayer during football games.

The district issued a statement saying that students praying during games is illegal “proselytizing” of religion.

“The case law not allowing prayer or proselytizing is clear. Courts have consistently ruled that prayer and proselytizing can not be sponsored by schools or school personnel,” the district said in a statement issued after the left-wing, Christian-hating group Americans United for Separation of Church and State. filed a complaint.

But even after telling students they had no religious freedom at school, the district spoke out of the other side of its collective mouth and added, “As a district, we absolutely understand the importance of prayer in the lives of our students, faculty, and staff members. We support the right of students to participate in and lead spontaneous prayers. That right is and will continue to be protected.”

Students and parents at Upperman’s game against Stone Memorial, though, didn’t seem to care what the district said. They held a prayer circle during the game anyway:

What a shot. Student-led prayer in Putnam County, TN. https://t.co/JOAVnWOTmD

After the mass prayer demonstration against the school’s unconstitutional suppression of religion, one Facebook user rejoiced saying, “Satan’s power was defeated tonight.”

The U.S. Constitution says freedom OF religion, not freedom FROM it.