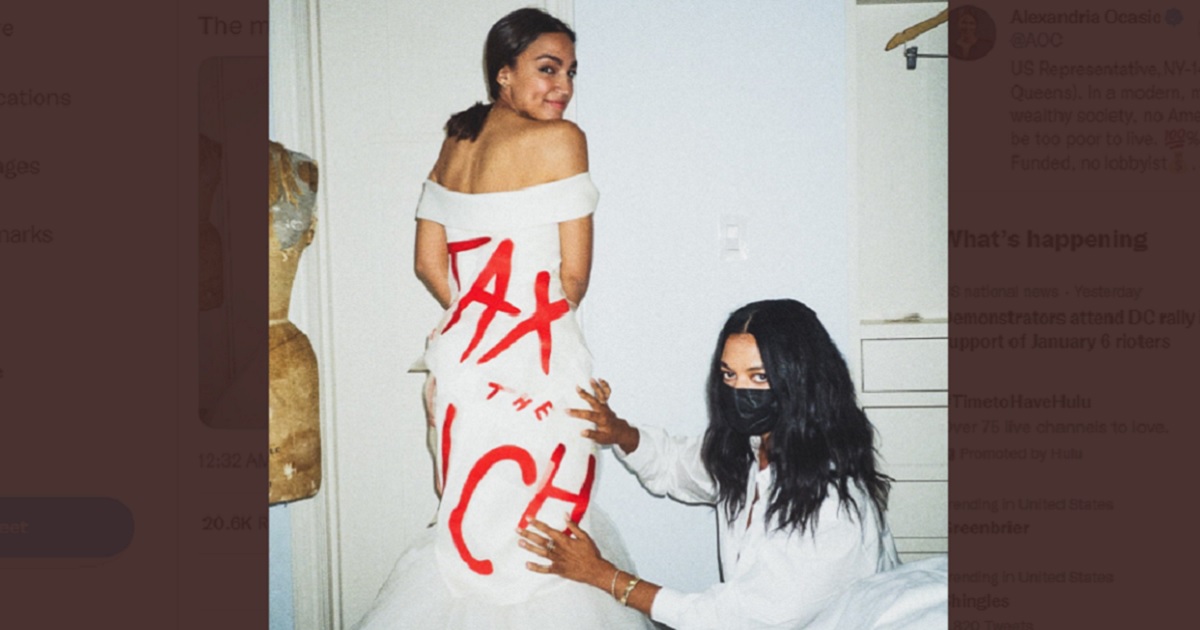 The following article, Designer of AOC’s ‘Tax The Rich’ Gown Is A Tax Scofflaw, was first published on Flag And Cross.

Aurora James, the designer of Alexandria Ocasio-Cortez’s now infamous“Tax The Rich” gown that she wore to the high society $35,000 per ticket Met Gala is a tax scofflaw.

Per Fox Business, she owes taxes to a few states and the IRS:

Designer Aurora James called her “Tax the Rich” dress for Rep. Alexandria Ocasio-Cortez a “powerful message” — but it’s not one she has taken to heart.

Most of luxe-living James’ arrears center on Cultural Brokerage Agency, an LLC she formed in 2011 to serve as the parent company of her fashion brand, which today is known as Brother Vellies. It’s a favorite of people like Beyoncé, Rihanna, and Meghan Markle.

Gee, she changed the name of her company and still has to pay taxes? Who’d have thought it?

Maybe the gown was supposed to have a train that AOC forgot to put on. Perhaps with the train, it said “tax the rich except for fashionistas.”

The company racked up three open tax warrants in New York state for failing to withhold income taxes from employees’ paychecks totaling $14,798, the state Department of Taxation and Finance told The Post. The debts — which were incurred before the pandemic — stem from 2018 and 2019. The company has been hit with 15 warrants in total since 2015.

The company got into a deeper hole with the feds. Between April 2018 and April 2019, the Internal Revenue Service placed six federal liens on Cultural Brokerage Agency totaling $103,220. The liens specifically cite the company’s failure to remit employee payroll taxes.

Well, maybe she didn’t remit the payroll taxes because her employees weren’t wealthy. The gown did say “tax the rich,” not tax the not-rich. But Cultural Brokerage Agency took the money out of employees paycheck—they just forgot to send it to the IRS,

While James apparently has no problem stiffing the Taxman, she isn’t shy about taking money from taxpayers — her company received in $41,666 in pandemic relief aid.

Over the years Cultural Brokerage Agency has also faced multiple legal challenges as a result of habitual nonpayment of worker benefits.

In October 2019 the state Worker’s Compensation Board slapped the company with a $17,000 fine for not carrying worker’s-comp insurance between March 2017 and February 2018. The company currently owes $62,722 and no payments have been received to date, a rep for the board told The Post. Workers’ comp is paid out when an employee is hurt at work and misses time.

.@AOC and @AuroraJames teamed up for the 2021 #MetGala. They talk about AOC's statement-making look, and James's @15PercentPledge pic.twitter.com/4gjnjEhoil

But taking money out of employees’ paychecks without paying the withholding taxes or workers comp insurance is not supporting the working class. In fact, it’s an indication that Aurora James has no class at all—taking from her employees and saving it for herself.

Ms. James’ fashion error is worse than wearing two different prints simultaneously, white socks with sandals, or even (God forbid) wearing white after Labor Day. Those may be fashion crimes, but not paying sending the IRS collected payroll taxes is a federal crime. If she doesn’t pay up soon, she might be wearing horizontal stripes (is that “in” this year?).

Continue reading: Designer of AOC’s ‘Tax The Rich’ Gown Is A Tax Scofflaw ...