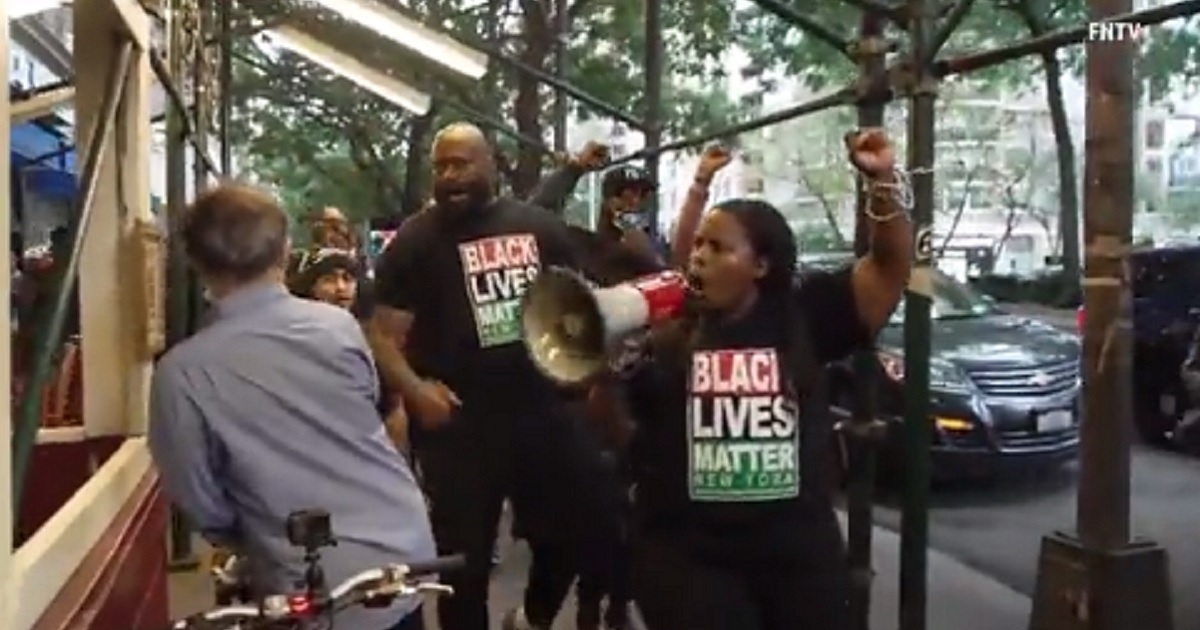 Politics has been in the business of making strange bedfellows for some time now, but few groups in public life would be so surprised to wake up with each other as conservatives and the Black Lives Matter movement.

And yet, the two seem to be coming to something resembling the same position on New York City Mayor Bill de Blasio’s vaccine mandate for indoor dining, which BLM Greater New York is protesting after the arrest of three black woman following a confrontation last week.

According to Fox News, the three Texas tourists — Sally Rechelle Lewis, 49, Kaeita Nkeenge Rankin, 44, and Tyonnie Keshay Rankin, 21 — face assault and criminal mischief charges after the incident last Thursday at a Carmine’s Italian restaurant on the Upper West Side of Manhattan.

Initial reports said the women didn’t show their vaccination cards when asked by a server, but it later emerged that two male members of their party who arrived after the women were seated couldn’t produce proof of vaccination.

BLM Greater New York protested the arrest outside of Carmine’s on Monday, with supporters of the women chanting “F*** you, Carmine’s,” and “Carmine’s are [sic] racist.”

WARNING: The following videos contain graphic language that some viewers will find offensive.

#HappeningNow
Black lives matter activists show up in front of Carmines restaurants in NYC after an issue happened there that stemmed from a vax card .
They chant ” Carmines is racist ” #VaccinePassports #NYC #COVID19 pic.twitter.com/Ke0PQUj1u4

“Cancel Carmen” Chant as BLM marches through and confronts UWS restaurant Carmines accusing them of lying about what happened in a viral video pic.twitter.com/nA9iCmFxPf

Video from the protest also showed a confrontation with a white patron of the restaurant.

NEW YORK: BLM activists confront the Carmines restaurant continuing to accuse them of being racist after an altercation over vaxx papers took place a few days ago

The reason the women’s case has become a cause célèbre among some in the black community is two-fold.

There are the particulars: According to a lawyer for Kaiete Nkeenge Rankin, their claim is that the 24-year-old Carmine’s hostess involved used racial slurs during a tirade against the women and the altercation was “mutual combat.”

“The hostess begins spouting out derogatory comments, and speaking with two of the women; they claim that the N-word is being spewed out,” Justin Moore told The New York Times.

“They also heard the hostess say, ‘Yeah, you guys can leave my restaurant,’ or something very aggressive like that. When Dr. Rankin hears that, she turns around and addresses the hostess. She tells her: ‘This isn’t your restaurant. You’re just a staff member here. Please address us with respect.’”

The restaurant denies this, telling the Times, “Nothing about this incident suggests race was an issue.”

And in a statement reported by Fox, Carmine’s broke down the racial makeup of its hostesses on duty:

“Three of our hosts who are respectively Black, Latinx, and Asian American women did their best to welcome a large party while enforcing New York’s vaccination requirement for indoor dining. ”

However, there’s a more general reason behind BLM Greater New York’s protest: The fact vaccine passports will create a two-tiered society that disadvantages the vaccine-hesitant, disproportionately affecting minorities. And that raises the uncomfortable specter of real segregation, the return of a new form of the “Jim Crow” laws Democrats keep accusing Republicans of trying to resurrect.

“I believe that this New York City vaccine passport will be used to keep Black people out of spaces, and if we don’t stop it now then the police will use it as an excuse to harass and arrest our people,” a spokesman for the group told Fox News in a statement.

In an interview with an independent journalist in New York, BLM Greater New York co-founder Hawk Newsome said the vaccine-hesitant are being punished for no good reason.

“Listen, vaccine is a choice, it’s a choice. You shouldn’t exclude people from everyday activities because they choose not to engage in something they have every reason to doubt,” said BLM Greater New York co-founder Hawk Newsome.

An interview I did with @IamHawkNewsome the founder of BLM greater NY at Carmines restaurants in NYC. #NYC #blm #COVID19 pic.twitter.com/mbfPnckcJm

Which is pretty much what conservatives have been saying. In the online argot of the day, compliments of the 1999 movie “The Matrix,”) it’s almost like some BLM leaders have been “red-pilled,” or taken a drug that awakens them to reality.

The left has generally been kinder to vaccine-hesitant minorities than they are to vaccine-hesitant whites. President Joe Biden has frequently offered mangled references to the Tuskegee syphilis experiment as a reason for black individuals to be wary of vaccination efforts, referring to it as the “Tuskegee airmen” instead. (The first was a government-run study in which black men were denied effective treatment for an often-deadly sexually transmitted disease; the latter was a revered all-black group of fighter pilots who served in World War II.)

Nicer paternalism is still paternalism, though — and, as the data show, that paternalism affects black and Hispanic people more than whites.

According to The Associated Press, data from the Kaiser Family Foundation found that roughly 40 percent of blacks and 45 percent of Hispanics were fully vaccinated as of August, as opposed to approximately 50 percent of whites.

This glaring inequality is something that the left doesn’t want to acknowledge when it comes to vaccine passports or mandates.

The same people who logically deduce a racial element lurking behind any police shooting involving a white officer and a black subject also don’t seem to acknowledge that if “systemic racism” means this holds true for other interactions, enforcement of vaccine passports or mandates would selectively disadvantage black and Hispanic individuals.

Don’t expect to see Black Lives Matter holding a rally with Tucker Carlson outside of Carmine’s anytime in the near future, mind you.

However, at least on this matter, BLM and conservatives find themselves to be the strangest of bedfellows — if perhaps distant ones.