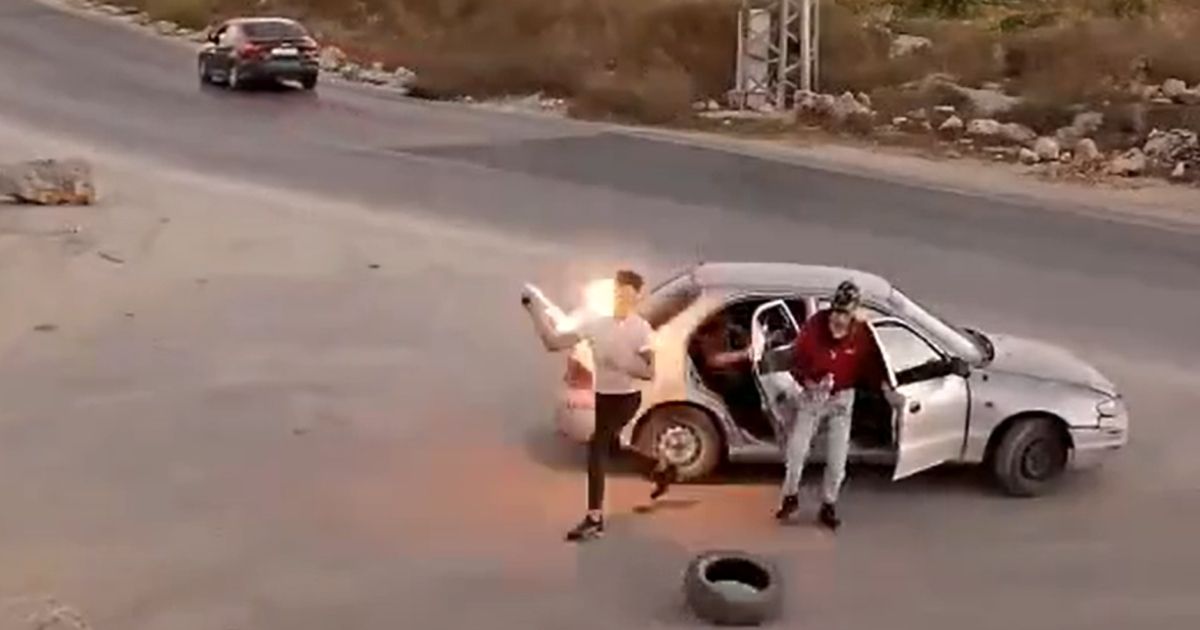 The following article, Graphic Content Warning: Thug Enveloped in Flames While Trying to Firebomb Israeli Border, was first published on Flag And Cross.

Karma struck when a thug who threw a Molotov cocktail at a fence protecting an Israeli settlement in the West Bank accidentally set himself on fire.

The incident unfolded at the border of the Migdal Oz kibbutz in Gush Etzion, Israel, according to a Twitter video posted Tuesday by Israeli journalist Roy Sharon.

In the video, an unidentified young man steps out of a car as it veers toward the wired fencing surrounding Migdal Oz, an Israel communal living settlement.

The thug lit up a Molotov cocktail and threw it at the fence, only to have the back of his shirt catch on fire in the botched process.

He then quickly retreated back into the getaway car, apparently unaware that his shirttail was in flames.

WARNING: The following video contains disturbing images that some viewers may find offensive:

In another inane gaffe, the thug’s companion kicked a tire toward the fence and doused it with lighter fluid. He then scurried away after his failed attempt to set it on fire.

The blundering bombers were Palestinian terrorists, according to the Zionist group Im Tirtzu.

A Palestinian terrorist accidentally lights himself on fire after throwing a Molotov cocktail near the Migdal Oz community in Gush Etzion.

The other terrorist also failed to light the tire on fire.

Yishai Fleisher, the international spokesman for the Jewish community in Hebron and an Op-Ed writer for The New York Times, mocked the perps’ flubbed bombing as giving “new meaning to ‘bad terrorist.'”

One Twitter user said the botched bombing occurred “2 minutes from my house. They throw Molotov cocktails multiple times every night at the Jewish community there.”

He said these terrorist attacks are motivated by anti-Semitism and repeatedly downplayed by the establishment media.

“It is never reported in the news!” he wrote. “Welcome to the world of #palestine built on lies of a fake people with no history as a nation, with a culture of Jew-hatred & genocide.”

2 minutes from my house. They throw Molotov cocktails multiple times every night at the Jewish community there. It is never reported in the news! Welcome to the world of #palestine built on lies of a fake people with no history as a nation, with a culture of Jew-hatred & genocide https://t.co/GLv2wwKTxv

A normal evening that the media wouldn’t hear about if not gone wrong. Another nationalist Palestinian harrassment. https://t.co/RQEn8A3OB7

Numerous other Twitter users erupted into online laughter over the incident.

This is not the first time that a lawless goon’s attempt to commit arson and terrorize people backfired.

In September 2020, an antifa hooligan accidentally set himself on fire with a Molotov cocktail during a Black Lives Matter riot in Seattle.

WARNING: The following videos contain disturbing images and graphic language that some viewers may find offensive.

WATCH AND SHARE: ANTIFA Clown sets himself on fire. #HotFootHighStep

In May 2020, another left-wing thug set himself on fire while trying to torch a building at a BLM riot in Fayetteville, North Carolina.

The mushrooming unrest in the Middle East is one of a growing number of crises the Biden administration has unleashed since January.

As the southern border gets barraged daily with unvetted illegal aliens, the rest of the world is falling apart.

This is the catastrophic fallout of a dismal lack of leadership in the White House. Unfortunately, the chaos is just getting started.