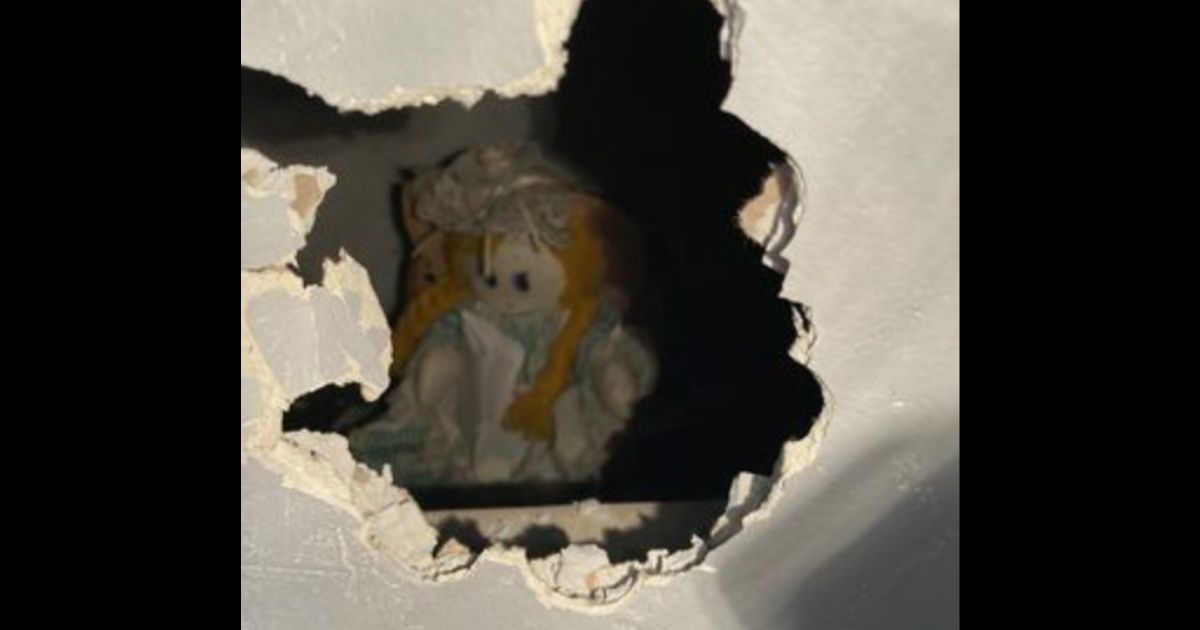 The following article, Doll from Hell: Homeowner Finds Old Doll Behind Drywall with Terrifying Note, was first published on Flag And Cross.

People generally have strong positive or negative associations with dolls. Some fondly remember toys they grew up with or have collections, while others are creeped out by those collections and childhood mementos.

Horror movies and Halloween decor certainly play on those fears, but one new homeowner got a very personal and unnerving gift along those lines that he discovered recently after moving into a new home.

Jonathan Lewis, a 24-year-old teacher who’d bought a home in the Walton area of Liverpool, England, spotted something unusual in the kitchen and decided to investigate.

“There was a wire coming out where the previous owners had the fridge, but I didn’t know where the wire was plugged in so I knocked through a bit of the plasterboard to see what was there,” he said, according to the Liverpool Echo.

Inside the wall, which was also the cavity under the staircase, was an old rag doll, looking like it was peeking through the opening Lewis had created.

The big-eyed doll would have been spooky enough to find in the empty space, but she came along with a note that made everything even darker.

“Thank you for freeing me! My name is Emily. My original owners lived in this house in 1961. I didn’t like them so they had to go. All they did was sing and be merry. It was sickening.

“Stabbing was my choice of death for them so I hope you have knives. Hope you sleep well.”

Some of Lewis’ friends found the doll and note too much. They advised him to get out and sell, but Lewis’ observational skills have picked up on the joke.

“Some of my friends have told me to put my house back on the market and move out, but I think it’s just a laugh,” he said.

“The letter says 1961, but the estate agent said when she was showing me around that the kitchen was only done four or five years ago.

“I think it must have been put there then because the paper doesn’t look very old and looks relatively recent.”

Many have commented that the handwriting looks like a teenager’s and that the contents of the note aren’t really as scary as they could be, pointing to idea of a young prankster as the author.

Others still think the discovery is a bit eerie and say they wouldn’t have behaved nearly as rationally as Lewis under the same circumstances.

How about you? What would you do if you found something like this lurking in your home?