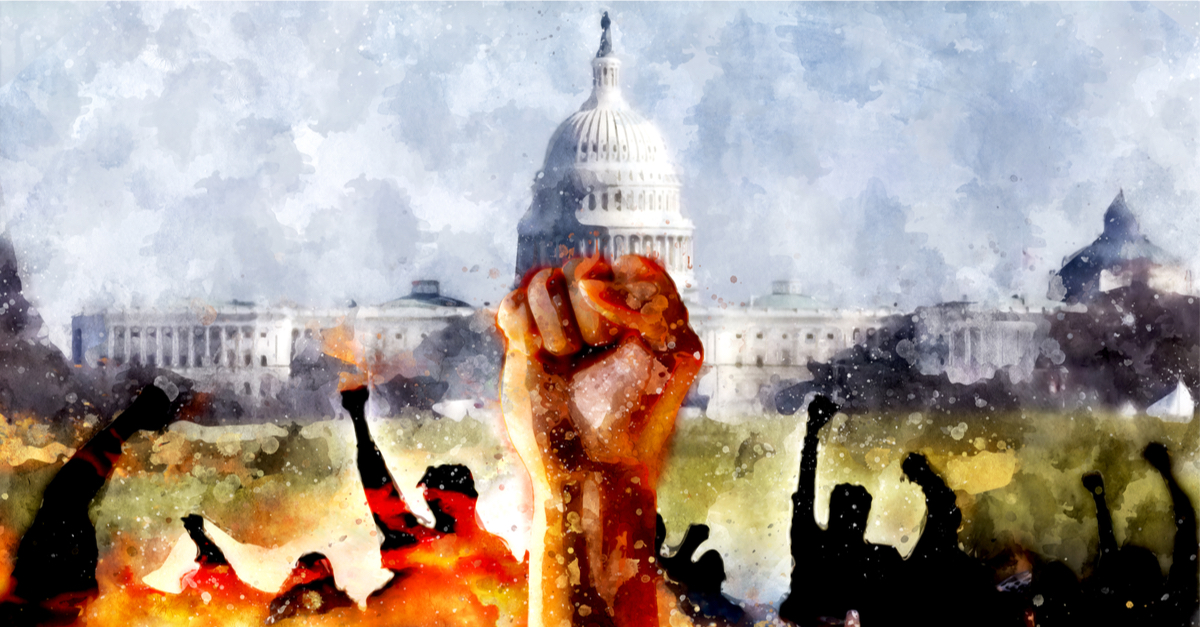 The following article, Political Prisoners in America: the January 6th Capitol Occupiers, was first published on Flag And Cross.

The United States of America was founded based on a constitution and amendments that guarantee rights to the individual; a republic where laws prevail, to be dispensed impartially; where unlawful search and seizure is not permitted; and where due process matters.

We are supposed to be the land of the free and the home of the brave; the nation which immigrants from around the world yearn to reach; the beacon of democracy and the shining example on Earth of a free people in a free land. Nevertheless, the Biden Administration, has taken action unprecedented in our history. It is treating those individuals who inhabited the U.S. Capitol on January 6th as if they are murderous terrorists.

The people that Biden is holding, in many cases for months on end in solitary confinement, are being denied their fundamental rights as American citizens.

An Insurrection? According to Whom?

Large numbers of people who entered the Capitol that day were ushered in by the Capitol guards. They merely walked through doors that were held open for them. The claims of insurrection are entirely ridiculous. No one had weapons.

How do you mount an insurrection with no armaments? Virtually every Capitol occupier had either a plane reservation or car ride ready for that evening or the next day. They did not intend to stay. In short, no organized attempt to overthrow the government was underway, and every Biden official knows that.

The ranks of actual Trump supporters, however, were infiltrated by members of Antifa and true insurrectionists who sought to create a false flag, making it seem as if Donald Trump and Trump inspired supporters intended to overthrow the U.S. government.

Trump supporters had no intention of overthrowing the United States government – it is total hogwash as is known by anyone who is familiar with the facts. Ashley Babbitt, a U.S. Air Force veteran, was killed by a Capitol guard. She posed no threat, however, carried no weapon, and based on the more rambunctious activity of some Capitol occupiers did nothing to earn her fate.

Angel Harrelson, whose husband is among the incarcerated, started a petition to Florida Senator Rick Scott (R). She implored government officials to “Free our political prisoners now! They are being mistreated and tortured. They are innocent until proven guilty. We want the public to see all footage from inside of the capital, now, with no cuts on footage, and no bits and pieces here and there!” She explained that she is one of the family members with a spouse in political prison.

The Biden Administration, and its incalculably undemocratic, unlawful, and despicable approach to administering justice, is stifling attempts to ensure that these incarcerated individuals receive lawful and constitutional protections. Justice actually must be served before and during the legal proceedings for any of the incarcerated.

What an outrage that a petition even needs to be created, circulated, signed, and submitted. When, indeed, do we petition for basic Constitutional protections, in this case, from our own government?

Biden’s handlers know full well about the treasonous behavior in which they are engaged. They feel all-powerful, however, and appear unconcerned. They’ve got the sycophantic press on their side as well as multi-millions of gullible Democrats, liberals, and progressives who believe that Biden is a kind man, his administration is both fair and just, and the Capitol occupiers are in league with the devil. As usual, the exact opposite is true.

For many decades, the U.S. Department of Justice has engaged in egregious acts of prosecutorial misconduct. DOJ prosecuting attorneys seek convictions by any means necessary. If that involves withholding evidence, delaying court cases, and bleeding the persecuted financially dry, then so be it. Within a 97% conviction rate, as a nation, we have crossed the line into banana republic territory.

Our voices need to be heard: Write to your Congressional representatives, to your Senators, to the editors of your newspapers, and to the gatekeepers of information and communication in our society. This includes the wannabe autocrats at Facebook, Google, Amazon, Twitter, etc, who don’t fool us with their rigged algorithms and ‘community standards.’

The contortion of real news by the Leftist gatekeepers, the views that they push, and the censorship in which they’ve been engaged, for far too long, will not diminish us. We know their end game: it is total control of the masses, ever to be ruled by a fraudulently elected ruling class, backed by über-liberal billionaires who believe they are the anointed ones.

No can passively sit by and hope that things will turn out for the better.

They are political prisoners by any definition. Just like Stalin, Putin, and so many tin horn dictators of the past. Yet no one in Congress, the Courts or especially the press seems to have any concern about what is happening. Guess what, the next guy(girl) in charge may go after the leaders of BLM, ANTIFA or any of the real violent groups that destroyed cities and businesses throughout the nation. But it could be those who would jail for life anyone that would refuse to vax or wear a mask. Think about it, if allowed when will they call your… Read more »