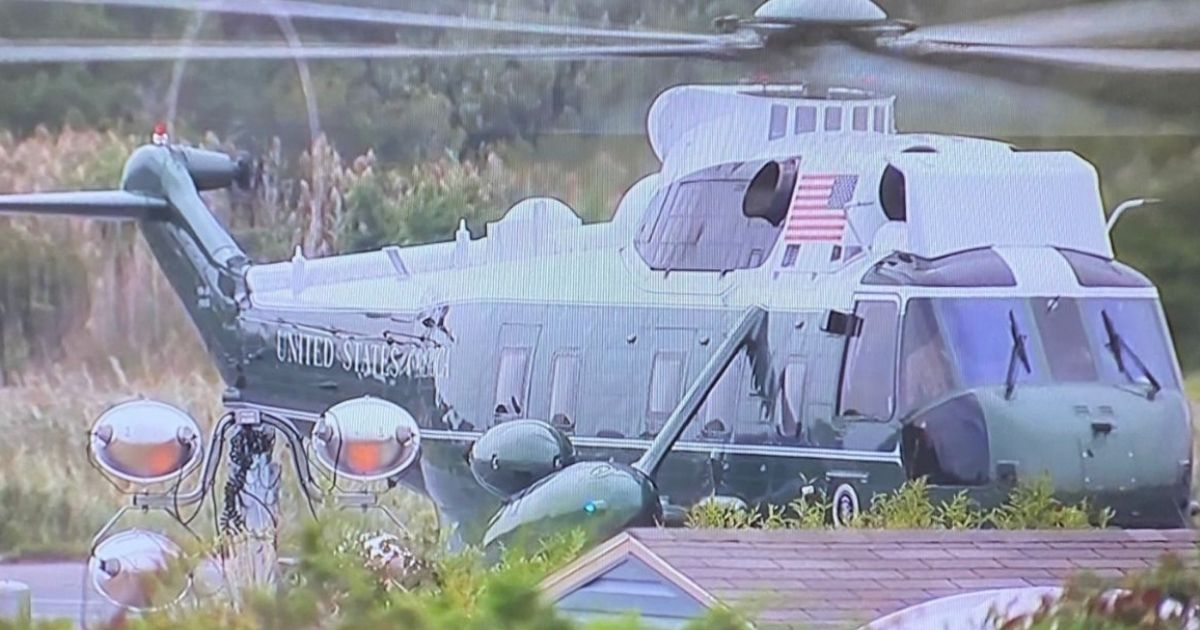 The following article, Biden Hits the Beach House for a Relaxing Weekend as America Grapples with Wave of Moral Crises, was first published on Flag And Cross.

President Joe Biden is on vacation again this weekend as the crises his administration has created consume a troubled country which he apparently needs a few days to forget about while at the beach.

NBC News chief White House correspondent Kelly O’Donnell shared images on Twitter Friday of Biden landing in Delaware to bask in the sun before the lunch plates had even been washed on the east coast.

President Biden has taken Marine One to a landing zone at Rehoboth Beach where he will spend the weekend at his Delaware beach house. pic.twitter.com/sfwrbVk0rj

Peculiarly, there were no stories headlining Biden’s getaway on the Associated Press home page. That’s odd, because on Dec. 25 last year, the AP printed this: “President Donald Trump spent his Christmas golfing in Florida as a government shutdown looms and COVID relief hangs in the balance.”

Of course, Trump was a Republican president, and few people in the decrepit establishment media view Christmas as anything special. That being noted, it was major news when Trump went home for Christmas.

The AP added in its holiday hit piece, “Trump tweeted that he planned to make ‘a short speech to service members from all over the world’ by video conference Friday to celebrate the holiday…”

Remember what it was like before Big Tech goons colluded with leftists Democrats to censor sitting presidents and other people en masse? Remember when we had a president who was capable of addressing people?

Trump was more present while golfing than Biden is while addressing the country — which is rarely.

Biden was gone from the White House earlier this year when border communities across the southeast were first inundated with COVID-positive illegal immigrants.

The president was also missing in action at Camp David last month as his administration’s decisions in Afghanistan resulted in a humanitarian crisis.

Thirteen U.S. service members were soon after killed by a suicide bomber as Biden’s military leadership surrendered to the Taliban, put troops in a defensive position and gave away weapons and equipment to terrorists as he assumedly still wanted to disarm the American people.

This weekend, as the country is again consumed by a crisis, Biden will be on the beach in Delaware at his Rehoboth Beach resort. The country has entered a full-blown moral crisis and we have no one to lead us through it.

We already don’t know for sure who is really running the White House when Biden is there. We know he definitely won’t be calling the shots until Monday.

Perhaps Gen. Mark Milley, an accused traitor who during the final months and days of Trump’s presidency allegedly betrayed the country’s civilian leader and phoned China, will have his feet up on the Resolute desk all weekend reading Marx as Biden wanders around a beach while avoiding questions about the seven innocent children military leaders like Milley killed last month in Kabul by a drone strike.

Milley inexplicably is still employed, even after he botched Afghanistan, reportedly betrayed his commander-in-chief and called killing foreign kids “righteous.”

A report last week from The New York Times which claimed that a U.S. military drone killed an innocent Afghan aide worker and his family was confirmed by the Pentagon. That confirmation came on Friday. Isn’t that convenient?

Nobody will be around to answer for that all weekend, or for the fact that France, our oldest ally, is walking away from us.

Biden will also have his toes in the sand as an estimated 10,000 reportedly mostly Haitian migrants sleep under a bridge in south Texas. Do you think that campout will be labeled a COVID super spreader? Don’t count on it. The Haitians didn’t vote for Trump.

Biden isn’t concerned, about any of this. He won’t have to answer for the Taliban’s butchers decapitating children as they seek to cleanse Afghanistan of all former American support. He can also avoid any talk of still-rising inflation and totally avoid the fact the country is hopelessly divided along ideological lines and missing its identity.

Remember when he promised to unite us all and then told private companies that they have to tell their employees what they must put into their bodies? He probably doesn’t, either.

The country right now seems like one giant powder keg. The only question for the White House seems to be, who’s tapping the keg in Rehoboth Beach?

Continue reading: Biden Hits the Beach House for a Relaxing Weekend as America Grapples with Wave of Moral Crises ...

this guy is a jerk