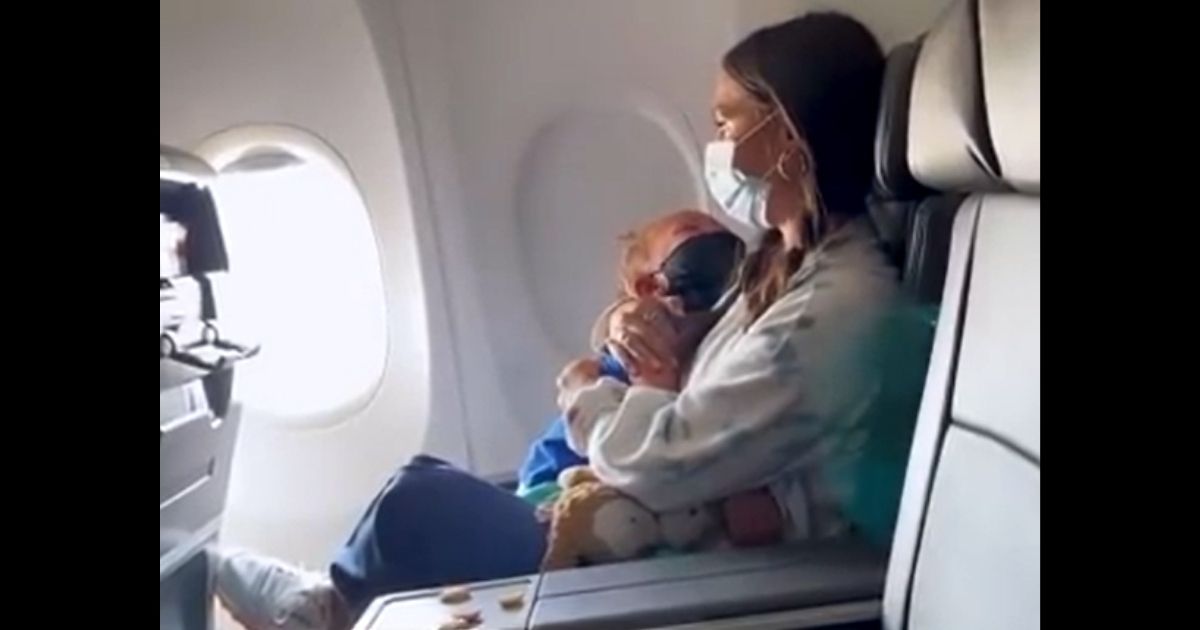 The following article, Watch: 2-Year-Old Has Asthma Attack as Flight Attendants Force Mask on Him, was first published on Flag And Cross.

The coronavirus pandemic has mutated into a medical dictatorship nationally while also exposing the petty desire for power and control among so many people who live in our society.

An Oklahoma mother says she and her 2-year-old son were kicked off of an American Airlines flight this week when the child could not wear a mask because he was having an asthma attack.

Video of the incident posted by the woman appears to back up her account.

Amanda Pendarvis first shared her story on Facebook late Monday. The woman, her son and her mother were traveling to Colorado from Oklahoma City. After stopping in north Texas for a layover, she said, they were booted from the aircraft because 2-year-old Waylon struggled to breathe.

Pendarvis said a flight into Dallas-Forth Worth was a breeze before her family met a power hungry flight attendant.

“Once the flight began lining up for take-off (which was taking off late as it was) we sat on the tarmac for about 40 minutes and a flight attendant named Carl approached me to say, ‘ma’am please contain your child, and pull up your mask’ because I was letting Waylon walk between the row because my mom was on the other side.

“I calmly replied, ‘sorry I’m trying to spare these other passengers of inevitable screaming, and since we haven’t taken off yet, I was trying to let him move around a bit before I have to put him in his seat.’

“I also kept pulling up my mask that way naturally pulls down, and I also would pull on and off to eat crackers with Way (I feel CRAZY even having to explain these tiny ‘duh’ details…but I have gotten so many messages & questions on Instagram that I want to put every detail I can on this post) He had ZERO understanding, zero empathy; blatant judgment.”

Pendarvis said Carl asked her how old Waylon was, to which she responded he had just turned 2. The flight attendant then allegedly demanded that Waylon, who his mother said has asthma, wear a mask for the entirety of the flight, despite the fact he had just tested negative for COVID-19.

As one could imagine, the asthmatic toddler had a hard time being used as a political prop for a power-hungry adult, so the masking didn’t go well. Pendarvis said she was giving Waylon a breathing treatment when she was told she was being removed from the flight for noncompliant behavior.

The video, which has since gone viral on social media, shows how this mother was apparently humiliated.

Wow. American Airlines kicked a 2 year old boy with asthma off a plane and had police waiting for him + his mom because a power tripping flight attendant Carl lost his humanity. The last thing you’d do to a child suffering from an asthma attack is force a mask on them. pic.twitter.com/pWuVXJrFps

What a horrible way to treat a family. Pendarvis said she and her family were met by police officers when they were kicked off the fight.

“A friendly man escorts us off the plane to 3 police officers who were very clearly expecting to contain a hysterical anti-masker who was flopping around. Nope. They are met with a 2 year old and mom with puffy faces from crying and his grandma —the two adults fully masked, totally mortified and shocked, and shook up about what just took place,” she wrote.

Pendarvis said the officers were “embarrassed” to have been dispatched by the flight attendant and the company he represents.

She also had a message for Carl, who no doubt fancies himself a hero.

“I hope you sleep well at night. I’m sure the other passengers appreciated being 2 hours late due to your heroic attempt of saving the world from our 2 year old,” she wrote.

The family was later allowed to board another flight to Colorado, which American Airlines confirmed to Newsweek in a statement: “After agreeing to adhere to policies instituted for the safety of our customers and crew, all individuals were rebooked for travel on the next flight to Colorado Springs.”

There were no reported Carls on that flight.

Sadly, instances where families with children have been removed from airplanes are all too common.

It would be easy to blame the coronavirus pandemic for all this madness. However, the reality is the reaction to COVID-19 has exposed the ugliness in so many people who crave influence over others.

That applies to Democratic lawmakers, flight attendants and too many others.

Ultimately the decision was the pilot’s. He has a duty to apologize to the family then needs to kick Carl’s arse for painting an erroneous picture of the situation.