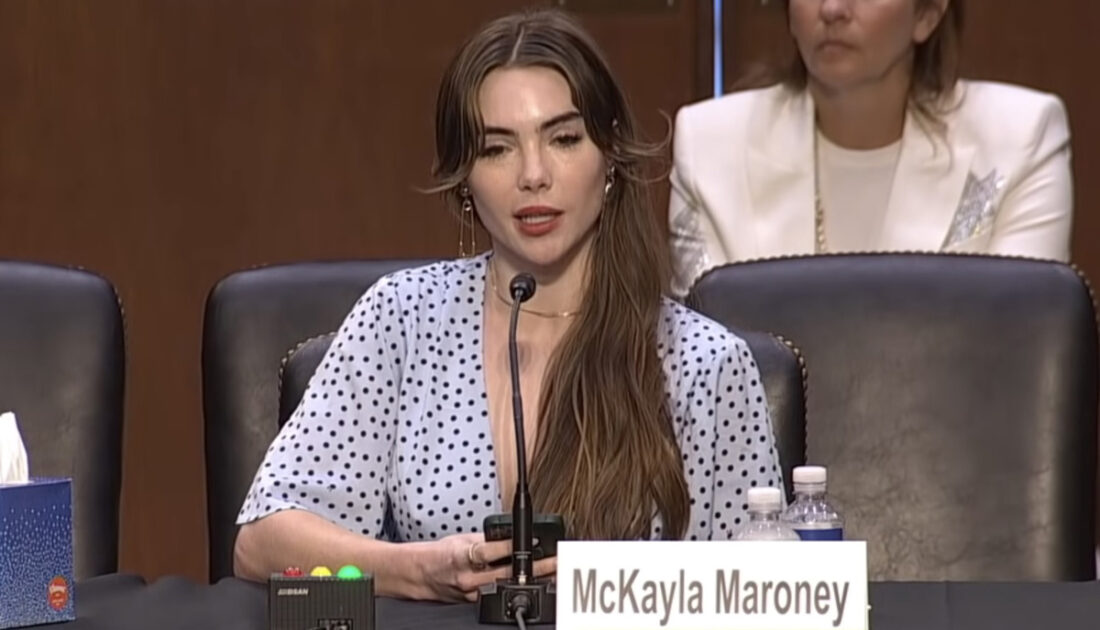 Olympic gold medal-winning gymnast McKayla Maroney went on the attack Wednesday as she testified about the sexual abuse she suffered at the hands of USA Gymnastics doctor Larry Nassar. Maroney had harsh words for the fumbling, complicit FBI, accusing them of falsifying documents and protecting a pedophile with their failed investigation.

Appearing with fellow gymnasts Simone Biles, Aly Raisman, and Maggie Nichols before the Senate Judiciary Committee on Wednesday, Maroney took aim at the FBI’s inability to get to the truth and walking away allowing Dr. Nassar to continue sexually abusing hundreds of young athletes.
In her testimony (See full statement), McKayla Maroney said that she was shocked to discover that the FBI failed to fully investigate so many of the claims of sexual abuse. And she was aghast to learn that the FBI agents that did attend to her accusations made up “entirely false claims” about what she told them.

“After reading the Office of Inspector General’s (OIG) report, I was shocked and deeply disappointed at this narrative they chose to fabricate. They chose to lie about what I said and protect a serial child molester rather than protect not only me, but countless others,” Maroney told the senators before her.

Maroney went on to say that she described the abuse she suffered in minute detail, but when she was done, she felt the FBI investigators acted as if her experience was not that bad, and she felt they dismissed her testimony with a gruff “is that all?”

“Those words in itself was one of the worst moments of this entire process for me. To have my abuse be minimized and disregarded by the people who were supposed to protect me, just to feel like my abuse was not enough”

Worse, Maroney said she found out that the FBI agents didn’t even bother to write down her statement for a year and a half, and when they finally get around to doing so, they just made it all up and did not report what she actually said.

“What is the point of reporting abuse if our own FBI agents are going to take it upon themselves to bury that report in a drawer,” she added. “They had legal, legitimate evidence of child abuse and did nothing.”

“Let’s be honest,” Maroney said accusingly, “by not taking immediate action from my report, they allowed a child molester to go free for more than a year, and this inaction directly allowed Nassar’s abuse to continue.

The FBI exposed covering for a serial pedophile pic.twitter.com/VglhR29KNO

The FBI eventually fired Indianapolis field office supervisory special agent Michael Langeman who the agency finally determined had utterly mishandled the investigation into the sex abuse allegations. More recently, in July Justice Department Inspector General Michael Horowitz that blasted Indianapolis agency chief W. Jay Abbott for his failure to respond to the allegations “with the urgency that the allegations required.”

More than 70 young gymnasts in ages ranging from 12 to 19 continued to suffer sexual abuse after the FBI’s failed investigation into the allegations.