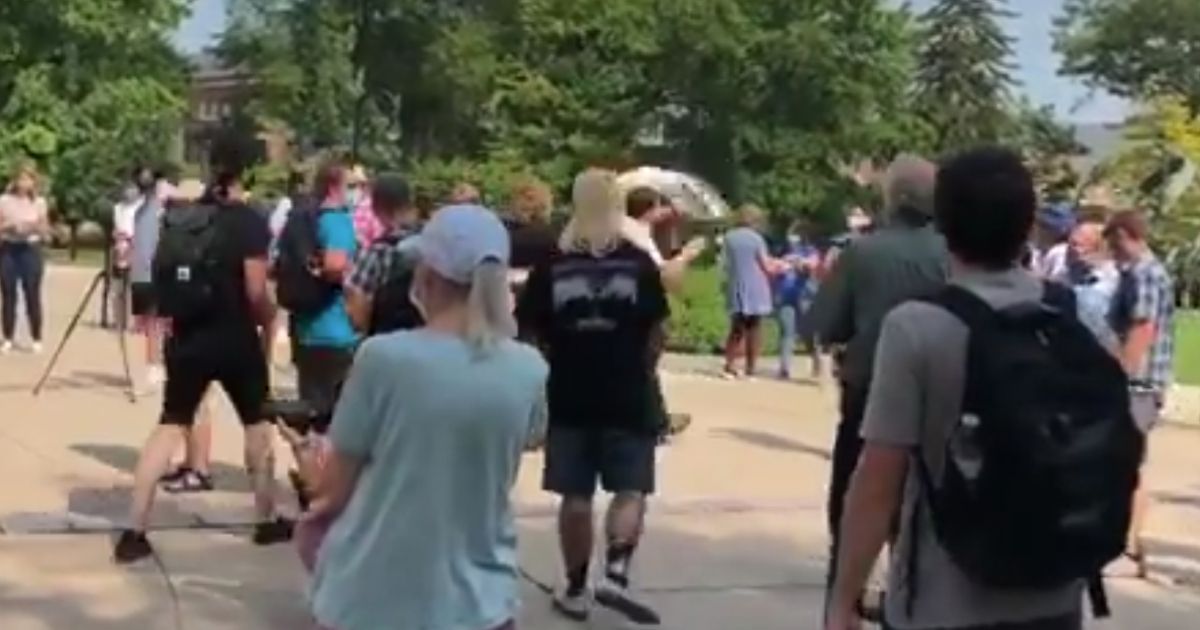 The following article, Professor Faces Years in Prison After Allegedly Bloodying Face of Anti-Vax-Mandate Student, was first published on Flag And Cross.

A professor has been charged with assault after allegedly bloodying the face of a student who engaged in a peaceful demonstration against the idea of vaccine mandates on campus.

Just another day in dystopia, right?

On Aug. 27, students and faculty at Pennsylvania State University held a rally advocating for a COVID-19 vaccine mandate, as the school is one of the few Big Ten Conference schools that have yet to make this requirement for its campuses.

Yep, you read that right — this was a rally calling for a mandate, presumably attended by people who had all, out of their own free will, been vaccinated themselves, as is well within their right to do.

So when a counterprotester from the student group Penn State Resistance showed up to hold up a sign opposing the proposition of a mandate, things got heated.

The Epoch Times reported that 36-year-old professor Walter Oliver Baker has been charged with assault (a second-degree misdemeanor), disorderly conduct (a third-degree misdemeanor) and harassment after he allegedly got into a scuffle with Avi Rachlin, the leader of Penn State Resistance, over the latter’s anti-mandate sign.

A video posted to Twitter appears to show the incident, in which a man identified as Baker is seen appearing to snatch the counterprotester’s sign away before pulling him to the ground.

A rally led by Penn State faculty and students asking for a COVID 19 vaccine mandate turned physical this afternoon at Old Main. A counter protester was present. Words and shoves were exchanged between the two sides.

Rachlin was reportedly seen being led away by campus police after the alleged incident with a bloodied face.

Baker’s faculty bio describes him as a professor of English and African-American studies who specializes in critical race theory — because of course he does.

Why am I not surprised?

As you can imagine, such an accomplished radical could most certainly not be expected to remain calm when confronted with the existence of a person who held a different view about campus vaccine requirements.

So we have a rally in favor of mandatory vaccinations and a professor who specializes in critical race theory, so the introduction of a counterprotester who dared to express opposition was basically asking for trouble.

It was bound to get violent and confrontational because these are the people who actually believe in using force or flat-out violence against the groups who will not comply with their demands for society.

The fact that someone was bound to snap is all the more reason why these kinds of demonstrations should and must be countered.

We cannot continue to let the ideological bullies win — and it’s good that this professor is being held accountable for his actions if he did indeed assault this student.

As President Joe Biden has declared he is losing his “patience” with the skeptical Americans who aren’t so receptive to the carrot-and-stick approach, those who have grown intoxicated by their own sense of moral superiority grow seething in their animus toward the citizens who refuse to comply with the new orthodoxy.

If a student on an American college campus cannot peacefully counterprotest a rally calling for stricter vaccine policies without being attacked by a member of school faculty, something is seriously amiss in our society.

I know it may not look like America much anymore, but it still is, which is why Baker is facing jail time and not Rachlin.

Yet how many more peaceful dissidents are being scared into submission by the angry digital and real-life mobs, by the threat of online censorship, unemployment or ostracism.

We are heading down a dangerous path right now, friends. And until more people are willing to stand up for what they believe against all odds and threats of social shunning, it won’t be long until hardly anyone is willing to take this risk.