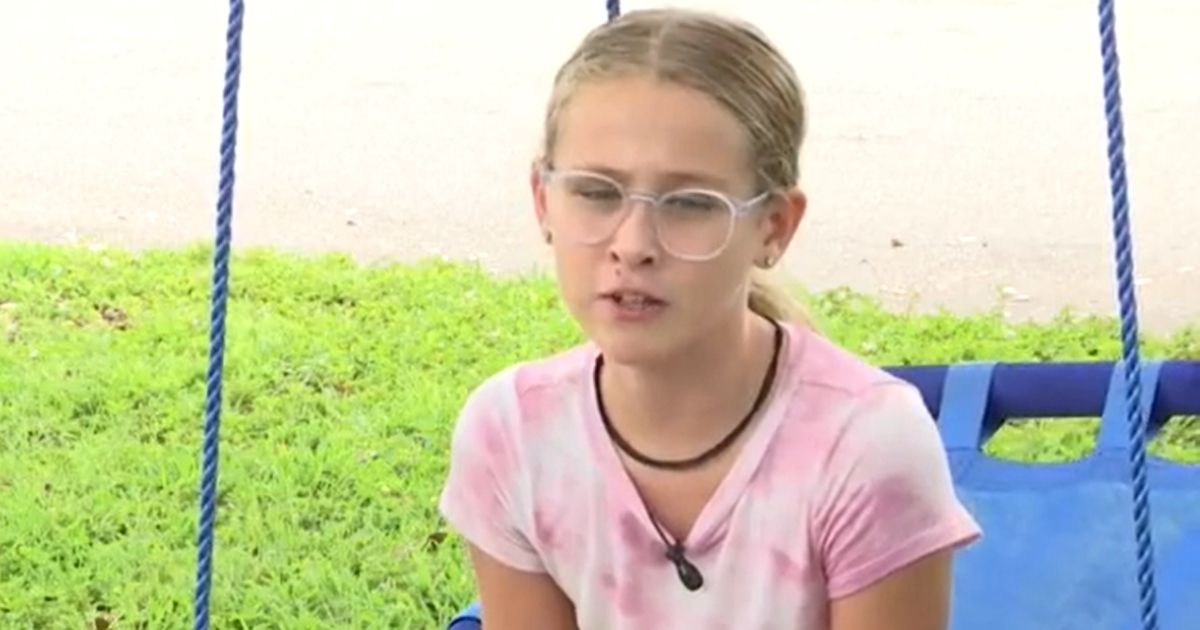 The following article, Young Girl Saves Neighbors' Puppy After Noticing Something Strange Coming from House, was first published on Flag And Cross.

On the evening of Sept. 4, 11-year-old Mackenzie Jenkins was sitting on a swing outside her Cape Coral, Florida, home when she spotted something suspicious going on at her neighbor’s house.

“I came outside to play on my swing and then I saw smoke coming out of the roof, and the front door and the bedroom window,” Mackenzie told WINK-TV.

She saw smoke but she also heard Fiona — the neighbors’ black-and-white, 8-month-old puppy — barking, and she was worried for the dog’s safety.

“I was scared,” Mackenzie said. “I, I was mostly scared about Fiona, because I didn’t want her to die.”

It was around 6:45 when Fiona raced to call 911 and provide the address, and firefighters soon were on their way.

“Then Engines 2 and 3, Ladder 1, Truck 4, Rescues 3 and 4, and Battalions 1 and 2 responded to a residential structure fire and, thanks to the quick actions of 11-year-old Mackenzie Jenkins, were able to save a 6-month-old puppy named Fiona,” the Cape Coral Fire Department posted Sept. 6.

“When firefighters were able to make entry, they knew to search for a dog thanks to the information provided by Mackenzie,” the post read.

“Fiona was unresponsive when firefighters found her, but Lee County EMS cooled her and provided oxygen, and by the time the fire was out, she was up and walking around!”

The neighbors hadn’t been home at the time of the incident, but thanks to Mackenzie’s observation, quick actions and thorough description, Fiona was saved and the fire was extinguished.

“They just said that they were happy that I saved the dog and the house,” she said, “cause the fire could have gotten worse if I didn’t call in the next five minutes.”

The cause of the fire was later determined to be a lithium battery charger.

Now, the girl is being hailed as a hero by her family, the neighbors, the fire department and complete strangers.

“Firefighters presented Mackenzie with a Community Recognition Coin for her actions which not only prevented further damage to her neighbor’s home from the fire but saved their dog’s life,” the fire department’s post continued. “Great job, Mackenzie!!”

“The dog is fortunately doing great,” public affairs specialist Andrea Schuch said, according to Fox News. “She was originally unresponsive when firefighters found her, but EMS cooled her and gave her oxygen and she woke up and was walking around before the fire was even out.”

“That just shows how important Mackenzie’s call was … if she had waited or hadn’t called, Fiona, the dog, wouldn’t have made it (and there would have been more damage to the house).”

“Mackenzie could hear the dog barking so that was her concern,” Mackenzie’s great-grandfather, Michael Jenkins, added. “I was very proud of her. Very proud.”