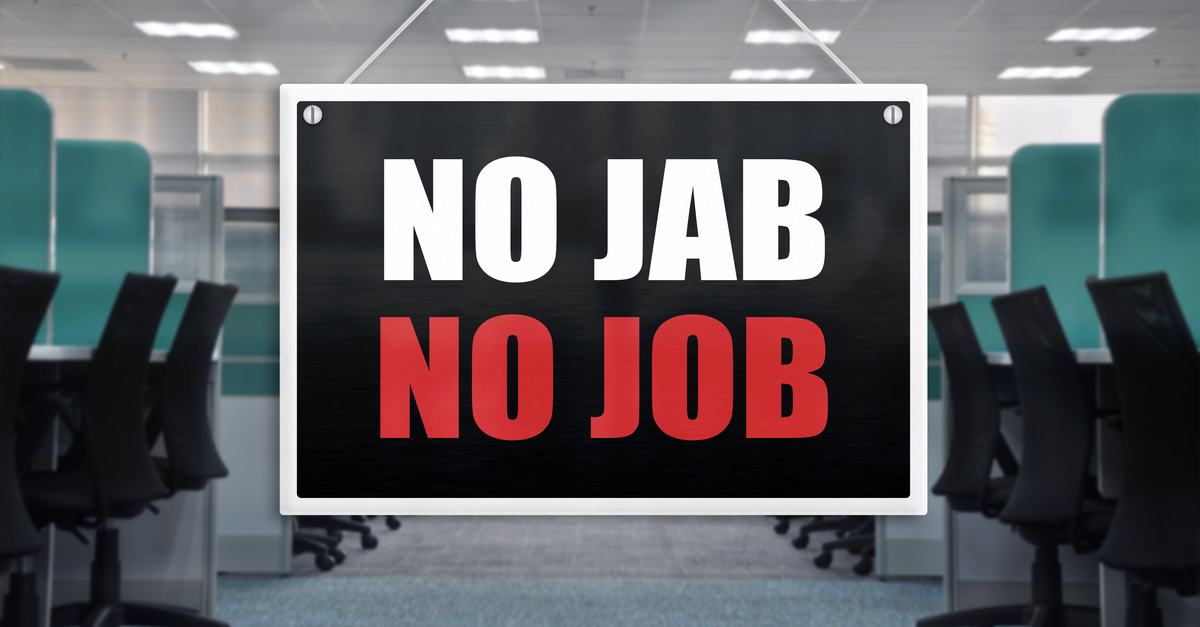 The following article, There’s No Turning Back After Joe Biden’s Vaccine Mandate, was first published on Flag And Cross.

By Michael Snyder, via Jeff Dunetz

This is the most sickening thing that Joe Biden has ever done. That is saying a lot because Biden has a long history of doing sickening things. For the past couple of hours, I have been trying to find the right words to put what we just witnessed into proper perspective. This truly is one of the most pivotal moments in American history, and there will be no turning back after this. We are descending into full-blown tyranny, and I have literally felt sick to my stomach as I have pondered the ramifications. What remained of the country that so many of us once loved is being absolutely eviscerated, and it is deeply heartbreaking to watch it happen.

The new mandates that Biden has decided to impose on the entire country aren’t just un-American. The word “evil” gets thrown around a lot these days, but in this case, it perfectly fits the situation.

No government has the right to try to put something into your body by force. Many have pointed out that such mandates are uncomfortably close to physical rape, and there is absolutely no place for such mandates in a free and just society.

According to CNN, Biden’s offensive new mandates “could apply to as many as 100 million Americans”, but I have a feeling that the true number could be even higher than that.

The order indicates that Biden has more respect for the Taliban than he has for the American people. His mandate order is a declaration of war against those 100 million Americans. He made the order days before the 20th Anniversary of 9/11 and after spending the previous month taking orders from the Taliban. And the same day, his press secretary called those terrorists business-like and professional.

Biden’s new mandates apply to all federal employees and contractors, anyone who works at any business with 100 or more employees, and the entire healthcare industry.

Previously, the Biden administration had allowed federal workers that didn’t want to be vaccinated the option of submitting to regular testing instead, but now the option for testing is out the window…

President Biden on Thursday signed an executive order mandating that all federal employees and contractors get vaccinated against COVID-19, with no exceptions for those who agree to regular testing for the virus, according to a source familiar with the plans.

Vast numbers of federal employees will now be faced with the heartbreaking choice of either taking an injection they do not want or giving up their careers.

But Biden didn’t stop there.

Shockingly, he has decided to target more than 80 million Americans that work for large companies that employ at least 100 workers. The following comes from the official White House website…

The Department of Labor’s Occupational Safety and Health Administration (OSHA) is developing a rule that will require all employers with 100 or more employees to ensure their workforce is fully vaccinated or require any workers who remain unvaccinated to produce a negative test result on at least a weekly basis before coming to work. OSHA will issue an Emergency Temporary Standard (ETS) to implement this requirement. This requirement will impact over 80 million workers in private sector businesses with 100+ employees.

As you read that, you probably thought to yourself that this can’t possibly be legal.

And you would be right.

But the Biden administration is probably counting on getting in front of some friendly judges that will issue favorable rulings that will make it “legal.”

On top of all this, the Biden administration is also going after any health care institutions that accept Medicaid or Medicare. Here is more from the official White House website…

The Centers for Medicare & Medicaid Services (CMS) is taking action to require COVID-19 vaccinations for workers in most health care settings that receive Medicare or Medicaid reimbursement, including but not limited to hospitals, dialysis facilities, ambulatory surgical settings, and home health agencies. This action builds on the vaccination requirement for nursing facilities recently announced by CMS, and will apply to nursing home staff as well as staff in hospitals and other CMS-regulated settings, including clinical staff, individuals providing services under arrangements, volunteers, and staff who are not involved in direct patient, resident, or client care. These requirements will apply to approximately 50,000 providers and cover a majority of health care workers across the country.

Basically, this covers pretty much the entire health care industry in this country.

Any health care worker that refuses to get an injection won’t just lose a job. In essence, they will become banned from ever working in their chosen field ever again.

There is much more to Biden’s plan, and you can read all about it right here.

In his speech announcing these new mandates, Biden made it quite clear what he thinks about our “freedoms”…

“This is not about freedom or personal choice,” Biden said. “It’s about protecting yourself and those around you.”

Others on his side of the political spectrum have also spoken very derisively about freedom in recent days. Sadly, millions of Americans actually support this sort of tyrannical approach.

Of course, before he entered the White House, Biden promised us that this would never happen. For example, he made the following statement back in December…

And as recently as July, White House Press Secretary Jen Psaki was speaking against any sort of a federal mandate…

In July, White House Press Secretary Jen Psaki told reporters that a federal vaccine mandate was “not the role of the federal government.”

She was right when she said that.

But now, here in September, she is strongly defending what Biden has just done.

Following Biden’s speech, there was a tremendous explosion of anger on social media because people recognize this is full-blown tyranny.

We have come to a moment when none of our national leaders can afford to be silent. This is a moment that will fundamentally change our country forever, and history will judge those that refuse to take a stand very harshly.

Fortunately, some national leaders are already speaking out. For example, Representative Thomas Massie has correctly recognized that Biden’s mandates are clearly unconstitutional…

‘OSHA has no more authority to enforce this (there’s no statutory authorization) than CDC had to issue the eviction moratorium,’ Massie said. ‘Which is to say they both have ZERO authority to do these things. Congress makes the laws in a constitutional republic.’

And a couple of governors are already threatening to take the Biden administration to court. In fact, Kristi Noem says that she has her legal team standing by…

Reacting to the news, Republican South Dakota Gov. Kristi Noem said her “legal team is standing by ready to file our lawsuit the minute @joebiden files his unconstitutional rule.”

“This gross example of federal intrusion will not stand,” she said.

She was joined by fellow Republican Georgia Governor Brian Kemp, who wrote ‘I will pursue every legal option available to the state of Georgia to stop this blatantly unlawful overreach by the Biden administration’ on Twitter Thursday evening.

Unfortunately, the outcome of such cases is usually determined by the political leanings of the judges that are assigned to them.

Needless to say, it shouldn’t work that way, but at this point, our judiciary has become just about as lawless as our society as a whole.

And lawless societies almost always end up descending into tyranny, which is happening to us right now.

These are such dark days for our nation, and they are only going to get darker.

I have been pleading for the American people to wake up for years because our liberties and freedoms were steadily eroded.

Now we have gotten to a point where the guy in the White House is enthusiastically taking a sledgehammer to the few liberties and freedoms we still have left. Unless the American people stand up and object, they will soon be totally gone.