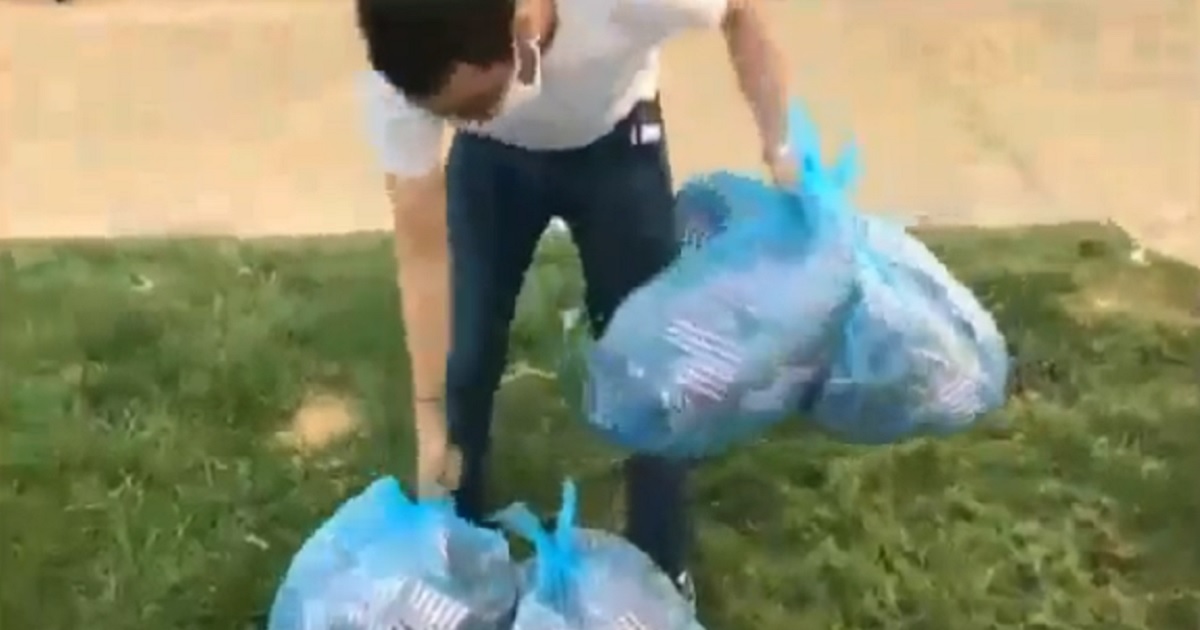 Controversy is raging at Washington University in St. Louis where a student was videoed taking flags displayed to commemorate the 9/11 attacks and stuffing them into garbage bags.

“To see a non-partisan, non-political memorial, disgraced without a swift response from the university says volumes,” said WU College Republicans President Nick Rodriguez, according to Young Americans for Freedom, which posted about the episode on its website.

Students had put together a display of 2,977 flags, one for each 9/11 victim, according to Fox News.

According to Student Life, the university’s student newspaper, the flags were placed on the field Friday night.

The student recorded taking them early Saturday morning was Fadel Alkilani, vice president of finance for the student union.

“I did not violate any university or legal policy. Now go away,” he said, according to YAF.

When asked why he vandalized the display, Fadel Alkilani told YAF “I did not violate any university or legal policy. Now go away.” https://t.co/UahJgoqxPp

In a statement to Student Life, Rodriguez wrote that Alkilani had “made a mockery of one of the most somber days in American history.”

“At minimum, I believe he should be removed from both SU and his [resident advisor] position, as what does it say to be a top American institution, and have yourself represented by a student leader who has no respect for property, campus traditions or the remembrance of thousands of lost lives,” Rodriguez wrote.

“Today is about remembering the tragedy, 20 years ago to the day, not to make a political statement. Any reason he can conjure to remove the flags I find ludicrous,” he wrote.

The university did not address the issue of consequences in its statement.

“We were disappointed to learn about the disruption to the 9/11 display on Mudd Field,” the statement from Vice Chancellor for Marketing and Communications Julie Flory stated. “We condemn the interference with the expression of support by the College Republicans for the victims of the national tragedy that took place 20 years ago today.”

The statement added that “we value freedom of expression in all forms and will work to ensure that all students are able to express their points of view through appropriate channels without disrupting the rights of others to show support for causes they care about. This is a critical component of our core values and we are committed to facilitating free speech on our campus.”

Conservative commentator Ann Coulter — who has been attacked by liberals during campus speaking engagements — took note of the news.

“I guess the college Republicans won’t be getting students funds to have me give a speech here,” she wrote in a Twitter post.

I guess the college Republicans won’t be getting student funds to have me give a speech here.

Fadel Alkilani, CHAIRMAN OF THE STUDENT FINANCE COMMITTEE at Washington University, filling blue trash bags with the miniature flags used as part of the 9/11 memorial: pic.twitter.com/rP6sne0BBJ

Alkilani posted a statement online claiming his actions were part of a “planned protest” to place the flags in the bags with writings “explaining the human cost of 9/11 in the past 20 years.”

“Since 9/11, Islamophobic hate crimes have been higher than they ever were before,” he wrote. “The United States invaded countries in the Middle East and Central Asia, and over 900,000 people have been killed because of the wars the United States has propagated. 37 million people have been displaced, with some reports stating that number reaches up to 59 million. Any memorial of 9/11 that does not contend with these facts is not only incomplete, but it also amplifies pro-imperialist sentiment and actively disrespects those who have died because of American Invasion,” he wrote.

“A memorial which uses US flags is especially insidious, as it does not recognize those who have fallen, but uses a symbol that was on the shoulders of those who are responsible for the deaths of 900,000 people, and uses the innocent lives lost during 9/11 as a political prop upholding American hegemony,” he wrote.

“Muslims such as I have faced fear, harassment, and Islamophobia from those who unjustly use the victims of 9/11 as a political cudgel,” he wrote.

Nathaniel Hope, a member of the WU College Republicans, told YAF that Alkilani showed “no remorse” and that the removal of the flags was in “violation of school rules.”

Faded should get the boot