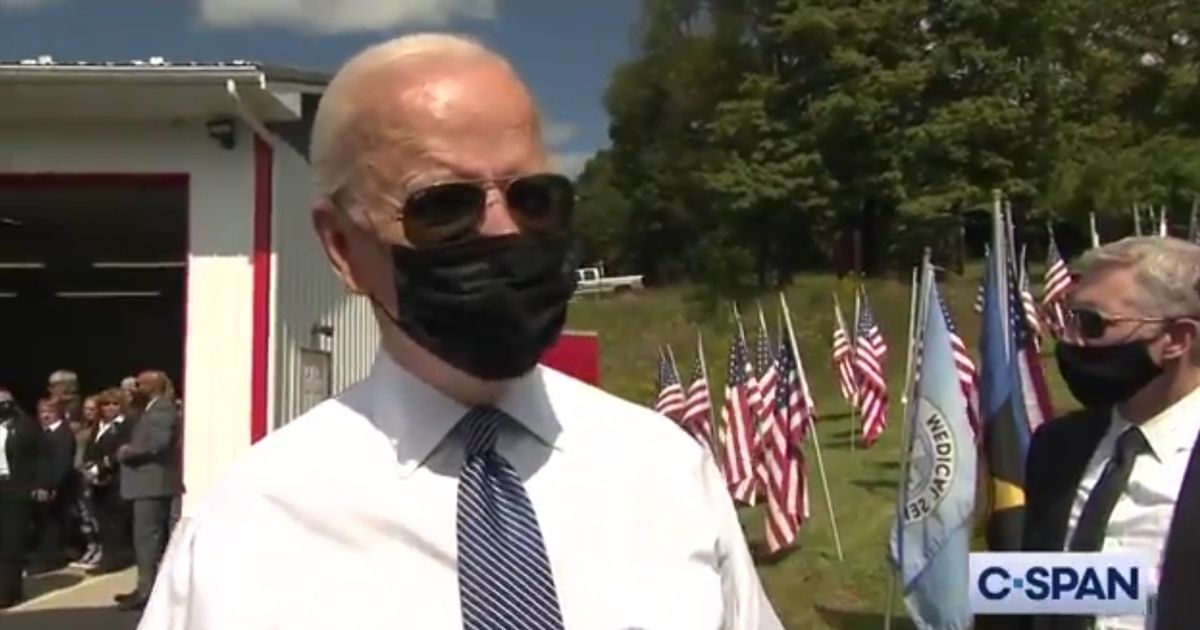 The following article, Watch as Biden Defends Botched Afghan Withdrawal at the Flight 93 Memorial, was first published on Flag And Cross.

At a place sacred to the memories of those killed on one of America’s darkest days, President Joe Biden used the occasion to tout his botched withdrawal from Afghanistan.

Biden visited the Shanksville, Pennsylvania, memorial to United Flight 93, which crashed in a field there on 9/11 after passengers fought back against the Islamic State group terrorists who hijacked the plane. The plane crashed, killing all four hijackers, seven crew members and 33 other passengers.

9:28–Flight 93 was hijacked over eastern Ohio. The plane’s radio mic was activated during the attack and air traffic controllers in Cleveland briefly heard one of the pilots shouting, “Mayday! Mayday! Get out of here! Get out of here!” pic.twitter.com/xB59wS5CbG

9:57–Less than 30 minutes after the hijacking, passengers and crew made phone calls and decided to retake Flight 93. They rushed up the aisle toward the cockpit. The cockpit voice recorder captured sounds of a desperate struggle. pic.twitter.com/agoXfcIlDN

While he was there, Biden said his decision to withdraw U.S. forces from Afghanistan, which led to horrific chaos last month, was sound.

“If you had told anybody that we were going to spend 300 million bucks a day for 20 years to try to unite the country after we got bin Laden, after al-Qaida was wiped out there …,” he said, trailing off.

Biden dismissed talk that terrorism could resurface in the nation where Americans went to war to stop terror.

.@POTUS at #Flight93 Memorial: “What’s the strategy? Every place where al-Qaeda is we’re going to invade and have troops stay there? C’mon.”https://t.co/wPrp3EUWkZ pic.twitter.com/45V4vAxte8

“Can al-Qaida come back? Yeah but guess what? It’s already back other places,” Biden said.

Biden mocked the idea of staying in nations like Afghanistan that provide a safe harbor for terrorists.

“What’s the strategy? Every place where al-Qaida is, we’re going to invade and have troops stay there? C’mon,” he said.

Biden said he has been told that his decision was popular.

“As I read it, I’m told, 70 percent of the American people think it was time to get Afghanistan, spending all that money, but the flip of it is, they didn’t like the way we got out. But it’s hard to explain to anybody, how else could you get out?” he said.

“For example, if we were in Tajikistan, and we pulled up a C-130 and said, ‘We’re going to let you know anybody who was involved with being sympathetic to us to get in the plane,’ you’d have people hanging in the wheel well. Come on.”

Although Biden has praised his manner of withdrawing troops from Afghanistan, others have not.

“There has never been anything like this,” former President Donald Trump said, according to Fox News. “It looks like we fled, and it is all because we have an incompetent person as the leader of our country.”