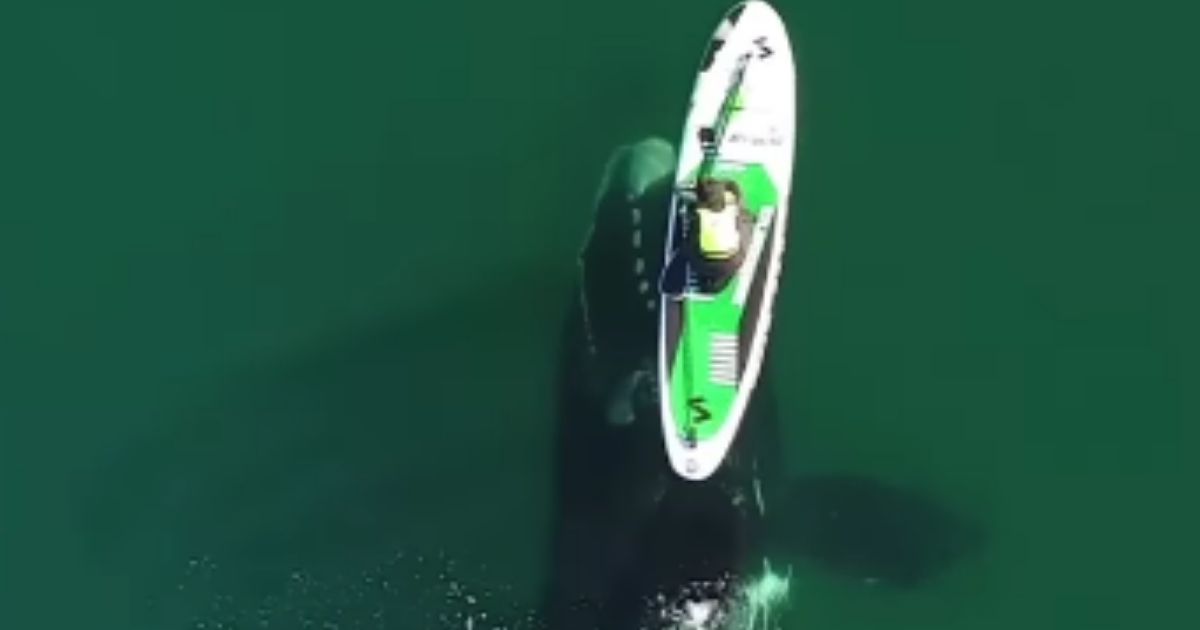 The following article, Paddle Boarder Gets Nudge from Whale Below the Surface, 'Didn't Feel Fear', was first published on Flag And Cross.

Any time a person sets out into nature, there’s the possibility he or she will spot something that makes the wild their home.

That possibility scares some people, but for many, it’s fuel.

Plenty of surfers, boaters, sportsmen and sportswomen who spend time in the ocean have come face-to-face with sea creatures at some point, regardless of whether those creatures turned out to be threatening.

For those who prefer to watch from a safe distance or enjoy seeing magnificent creatures around the world, there’s footage of  unexpected interactions online.

One video that recently has stolen feed space and hearts is a video of a paddle boarder in Puerto Madryn, Argentina, being investigated by a seemingly curious whale.

The shots were captured by photographer Maxi Jonas, who used a drone to snag the awesome moments and share them with a larger community.

“I think I made the most amazing whale drone video in my life.”

Many would agree that this interaction captured on film is a once-in-a-lifetime scenario that fortunately turned out to be playful.

The original post has been shared over 49,000 times, and the clip has been picked up by dozens of outlets and shared thousands more times.

“A curious southern right whale gently nudges a paddle boarder off the coast of Puerto Madryn, an Argentine city in northern Patagonia,” the Ocean Conservation Research — OCR page on Sept. 7 captioned its share of the video.

“Puerto Madryn acts as the gateway to the Península Valdés, a UNESCO site of global significance for the conservation of marine mammals. Around 1/3 of the total population of right whales throughout the Southern Hemisphere use the protected bays of Península Valdés as breeding and calving grounds between June and December.”

Some commenters pointed out that this whale’s actions were consistent with courting behavior, and perhaps the whale was confused by the paddle board, mistaking it for another whale.

Others have commented that they hope this doesn’t cause a glut of ill-informed adventurers to try to make contact with whales while they’re in the area.

Most are choosing to focus on how such a massive creature could be so gentle, barely nudging the board along with a single fin and floating majestically below it — and it certainly is a beautiful sight.

The paddle boarder was identified by BBC News as Analia Giorgetti, who described her close encounter as “peaceful, amicable and magical.”

“That moment, it was a wonderful moment. I didn’t feel fear,” she said in a translation.

“And it was my birthday. What a birthday present for me!”