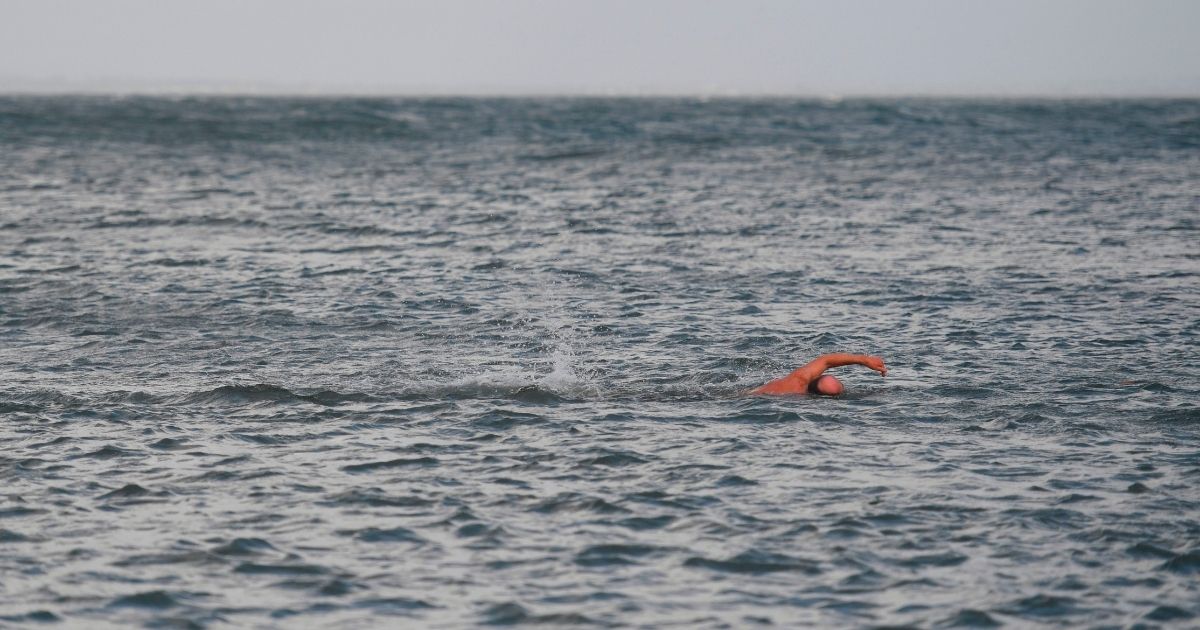 The following article, Fin-Tastic: Dolphins Miraculously Help Save Swimmer Stranded for Hours, was first published on Flag And Cross.

On Aug. 22, 24-year-old Ruairí McSorley from Londonderry, Ireland, went for a swim in Tralee Bay on the southern Irish coast.

“When I got to lighthouse, I celebrated for about 20 minutes and then I started the swim back.”

But while McSorley seemed to be having a grand old time on his great adventure, people on the beach were not. Someone had discovered a pile of clothes and a neighbor reported McSorley missing, some fearing the worst.

“I think those who reported me weren’t sure it was me but they were sure it was a suicide mission,” McSorley aptly noted. “Either that or just that I’d lost my marbles.”

It’s around six miles out to the lighthouse in cold water, and McSorley was sporting a simple pair of swim trunks. At some point, he realized he was not alone in his swim.

“As I was swimming I saw some black fins, the first thing I thought to myself was … ‘why didn’t I google whether Southern Ireland had sharks?'” he recalled.

“I thought, ‘well if they are sharks, I’m punished at this point, that or they’re just not hungry.”

The “sharks” were not hungry because they were not sharks. A pod of dolphins had surrounded the overeager swimmer and they became his saving grace.

The Fenit Royal National Lifeboat Institution had been searching for McSorley for hours, but they had a lot of area to cover and a single person swimming was not going to be easy to spot — especially as it was growing dark.

But a whole pod of dolphins was noticeable and caught rescuers’ attention.

“At 8.30pm, volunteer lifeboat crew with Fenit RNLI spotted a pod of dolphins and a head above the water about two and a half miles off Castlegregory beach,” the Fenit Lifeboat Station posted on Facebook. “The casualty was conscious and immediately recovered onto the lifeboat and brought Fenit Harbour to be taken to hospital.”

“After a long and exhaustive search, members of the lifeboat crew were overjoyed to sight the missing swimmer in the water,” Fenit RNLI Lifeboat Operations Manager Gerard O’Donnell said.

“They had been scanning the water for any sign of movement and were worried with light fading that they would not find anyone. Even at this time of year, the water can be very cold and as, yet we don’t know how long this person was in the water and when they entered it. When the lifeboat crew found them, they were a good distance from the shore and were exhausted.”

The rescue was called a “miracle,” and medical experts were shocked that McSorley was alive. He was found three miles from shore and if he’d been on his own for even 30 more minutes, his body would have shut down.

“It is literally beyond us all (how he survived), he had no wetsuit, nothing,” RNLI coxswain Finbarr O’Connell said. “His body temperature was so low. It dropped way down. The medics were amazed with him. It’s incredible, really.

“There were a lot of dolphins around, maybe they helped him in some way or another — who knows?”

McSorley spent two days in the hospital, though he stressed that it was merely precautionary. His spirits don’t seem to be dampened in the least, and the next challenge he’s planning is to travel to Texas and become an auctioneer.

“If you choose to make things hard out of choice, you’re ready for anything,” McSorley quipped. “It’s like my way of dwarfing what most people would see as big challenges in life.”

The RNLI also had a bit of advice they wanted to share.

“We would advise that anyone undertaking a swim lets people know where they are going and when they expected back,” O’Donnell said. “This was a very lucky individual.”