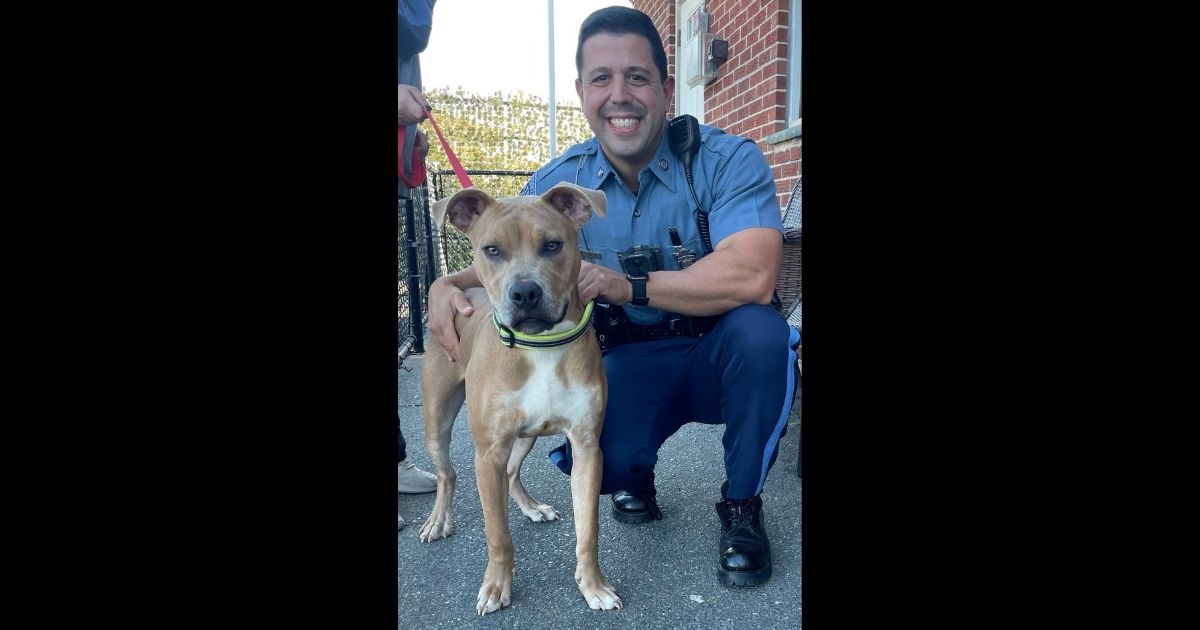 The following article, Owner Arrested After Dog Is Chained Up on Beach and Left to Drown in Rising Tide, was first published on Flag And Cross.

Last month, a man in Revere, Massachusetts, decided he no longer wanted his dog, a pit bull mix named Killer.

Instead of taking him to a shelter or finding him a new home, though, he allegedly walked the dog to the beach, tied him up in an area that would be submerged at high tide, and walked away.

Police got a call about Killer shortly after noon on Aug. 29, and Carlo Mastromattei with the Massachusetts State Police responded to the tip.

He arrived at the beach to find the dog chained to a piece of exposed rebar.

“The approximately 50-pound dog had a thick metal chain around his neck with a heavy rock attached to it, preventing the dog from escaping,” the Massachusetts State Police posted on Facebook.

“The dog was left in a secluded portion of the beach close to the waterline, chained to the piece of rebar exposed at the bottom of the walkway where it meets the sand at the high tide line.

“During certain parts of the day this portion of the beach is completely submerged, with the tide rising as high as street level, past the point where the dog was chained.

“The dog was at risk [of] drowning in a couple of hours if he hadn’t been found.”

Killer was taken to a kennel. The next day, Mastromattei returned to the scene with fellow state trooper Pasquale Zollo.

They were able to obtain four surveillance videos of the area, all showing a man leading a dog to the beach with a chain.

On Friday, the suspect was identified as 27-year-old Elias Pacheco-Osario, who eventually admitted to abandoning Killer on the beach after “he had decided he could not keep the dog any longer.”

Pacheco-Osario “was taken into custody by Troopers on Friday following a diligent investigation led by Trooper Carlo Mastromattei and assisted by several other Troopers and Revere Police Officers,” the state police’s post continued.

“Trooper Mastromattei worked on the investigation while working his shift … and also while on his own time over the course of several days.”

Regardless of Pacheco-Osario’s legal fate, Killer is in better hands and will hopefully find a home with someone who will treat him with the love and care he deserves.

Continue reading: Owner Arrested After Dog Is Chained Up on Beach and Left to Drown in Rising Tide ...