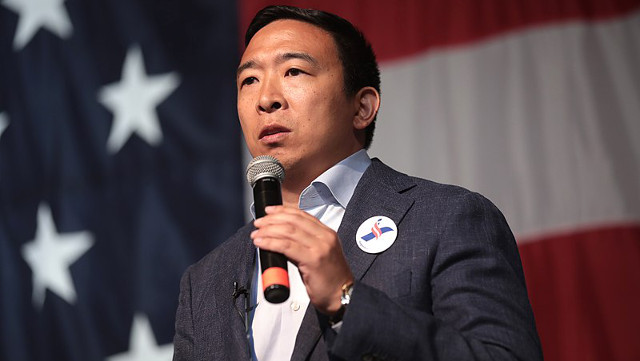 The following article, Democratic Party Splinters as 2020 Prez Candidate to Form Third Party, was first published on Flag And Cross.

At times, it felt as though it was a race between the GOP and Democratic Party to see who was going to fracture first.

On the right, we have the MAGA Movement sparring with the more moderate Republican Party, threatening to split the conservative vote between the Trumpian corner of the GOP and the centrist stalwarts who’ve been a part of Washington’s DNA for decades.

On the left, it’s the near-socialist progressives who are threatening to tear the party apart, often lamenting how slowly and carefully the rest of the Democratic Party oscillates.

Now, in a stunning escalation of this division, one of the 2020’s more progressive presidential candidates is now set to form a third party, and tear the Democratic caucus in two in the process.

Former presidential and New York mayoral candidate Andrew Yang is set to launch a third party next month, according to two people familiar with the matter.

Yang is expected to start the party in conjunction with the Oct. 5 release of his new book, “Forward: Notes on the Future of Our Democracy.”

It’s not clear what the name of Yang’s third party will be or how he plans to deploy it in 2022 or 2024. Yang and his team did not respond to requests for comment.

Only a limited amount of information was available about the ethos of this new party thus far.

But the book’s publisher, Crown, did give some clues about the type of platform Yang may pursue. It writes that the book is an indictment of America’s “era of institutional failure” and will introduce “us to the various ‘priests of the decline’ of America, including politicians whose incentives have become divorced from the people they supposedly serve.”

Yang was considered one of 2020’s more progressive candidates, having touted his plan for “universal basic income” on the campaign trail, and taking plenty of criticism over the socialist aspects of his plan in the process.

Starting from the Top with the Republicans Establishment, we have Socialist Lite, then referring to Democrats as Socialist Regular’ and then a Third Party of Socialist extra Strong! This Nation is Screwed if we cannot get a Trump type back into the presidency!