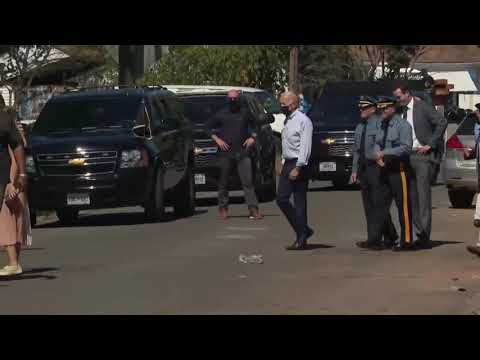 The following article, 'You Leave Americans Behind:' Biden's Trip to NJ Blows Up in His Face When Angry Protesters Show Up, was first published on Flag And Cross.

The Democratic president was in the Garden State Tuesday to survey flood-ravaged areas that were hit hard by the remnants of Hurricane Ida last week, NBC News reported.

Biden began with a stop in Hillsborough Township to meet with officials there before touring nearby Manville, a town blanketed by floodwaters from the storm that left 67 dead in its wake.

While the president was looking for the photo ops of him laying on his much-touted empathy, what he got was footage of several roadside protesters shouting at him and waving flags, many proclaiming allegiance to former President Donald Trump with messages like “Don’t blame me I voted for Trump” and others with insults aimed specifically at Biden.

WARNING: The following videos and tweets contain graphic language that some viewers will find offensive.

“This is how NEW JERSEY greeted JOE BIDEN today – WOW,” TurningPoint USA’s Benny Johnson tweeted with footage of protesters dotted along the street.

This is how NEW JERSEY greeted JOE BIDEN today – WOW

Another tweet contained many colorful insults for the president, including the accusation that he “left our soldiers behind.”

“F— you, Biden. F— you, you piece of s—-,” the protester yelled. “You’re killing our kids out there. Worthless piece of trash,” the unidentified male protester later said.

“Fu*k you Joe Biden. Fu*k you, Motherfu**er. Leave our solders and Americans behind. Piece of sh*t. Bastard. Fu*k YOU!” pic.twitter.com/W0l6V7zj53

Still another tweet from Johnson featured video as Biden’s motorcade rounded a corner to a chorus of boos and one protester calling him a “murderer” and hurling similar insults that he is “trash” before ending the video in a lot where more than a dozen protesters congregated.

“No supporters showed up for Biden in New Jersey — but dozens of Trump supporters lined the streets to tell Joe what they thought of him,” Johnson captioned it.

No supporters showed up for Biden in New Jersey — but dozens of Trump supporters lined the streets to tell Joe what they thought of him: WATCH pic.twitter.com/VE15qv3STI

“You leave Americans behind,” a man shouted. “He will leave you behind — you guys protecting him,” he directed at the officers before shouting the name of someone buried at Arlington National Cemetery, likely a casualty of the war in Afghanistan that Biden abruptly put an end to by ceding the country to the Taliban.

“For what? He lost his life for what?”

Matt Arco at the Star-Ledger noted people were shouting “Biden go home” and “You should resign” at the president during a stop.

People in nearby home are shouting at Biden:
“Biden go home.” “You should resign.” “Fucking tyrant.” “This country is going to shit.” pic.twitter.com/rhvaK08K5y

According to Politico, Biden won Somerset County — where Manville is located — by over 20 points, meaning folks there should have rolled out the red carpet for him.

The problem for the president is that while New Jersey a deep blue state, even staunch Democrats can’t stomach Biden’s botched Afghanistan withdrawal.

He has left the country in the hands of the Taliban — now armed with U.S. military equipment left behind — in his hasty retreat from Afghanistan. Moreover, he left countless Americans stranded in the increasingly hostile nation in the process, and he has done so without a shred of remorse or a plan to make it right.

Biden’s poll numbers have plummeted after the Aug. 31 pullout from the strategic stronghold that kept the terrorists fighting our boys overseas rather than our civilians stateside.

He had no supporters there to greet him because he has so few supporters left, even in New Jersey, even in a time of great need. The only people who wanted to see Biden were the ones that wanted to jeer at him.

When the people of New Jersey turn their backs on a Democratic president, that’s when it becomes abundantly clear that Americans are simply fed up — and at an inopportune time with 2022 midterms just around the corner.

Continue reading: 'You Leave Americans Behind:' Biden's Trip to NJ Blows Up in His Face When Angry Protesters Show Up ...