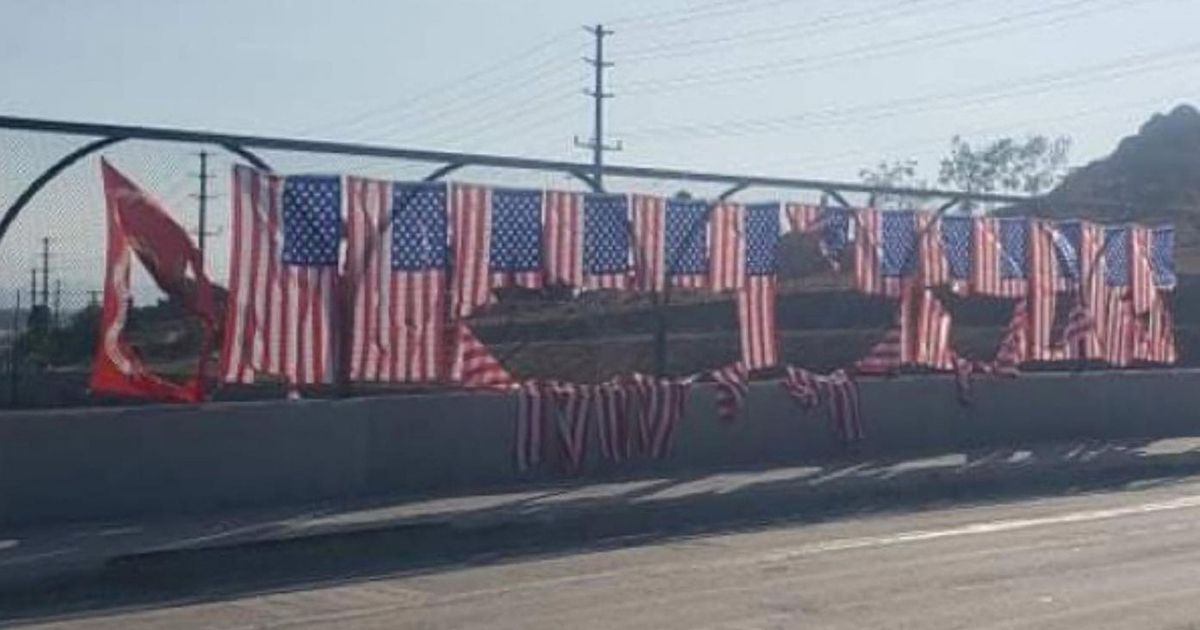 The following article, Memorial for 13 Service Members Killed in Kabul Targeted with Major Vandalism, was first published on Flag And Cross.

A California freeway display of 13 flags to honor the U.S. military members killed outside the Kabul airport last month was destroyed in an act of vandalism, according to the Riverside Police Department.

“Recently after the deaths of our 13 United States Service Members killed in Afghanistan, 13 American Flags and 1 Marine Corp flag were placed on the fence to the Ivy Street overpass to the 91 Freeway in Riverside as a memorial. Sometime yesterday, an observant citizen noticed the flags appeared to be damaged and it was reported to the police,” the department said in a Facebook post on Tuesday.

“At this point, we don’t have any suspect description but it’s obvious the flags were intentionally damaged.”

“Two citizens helped to take down the damaged flags, which were later turned over to local Boy Scout Troop 703 to be properly retired, police said,” Fox News reported.

“As of Tuesday, no arrests have been made and police said they did not have a suspect description.”

The story of the vandalized flags was not all negative. A later update noted the 13 destroyed American flags had been replaced.

The display was restored by the Greater Riverside Chambers of Commerce Military Affairs Council.

“We felt inspired by the Riverside resident that hung American flags on the Ivy Street bridge and the family that replaced them when the initial ones were vandalized,” the organization posted on Facebook.

“Thanks to the Greater Riverside Chambers of Commerce Military Affairs Council, we added 13 more American flags and the United States Marine Corps flag to the 14th Street bridge in honor of the service members who recently gave their lives during the withdrawal from Afghanistan.

“We are proud of all the men and women who have served our country in the armed forces, and especially those who gave the ultimate sacrifice. Thank you and welcome home,” the post added.

The flags honor the 13 U.S. military members who lost their lives in a suicide bombing outside the Kabul airport in Afghanistan last month as they assisted with evacuating Americans and Afghan allies trapped under the control of the Taliban.

The blast also killed about 170 people and wounded other U.S. military members.

According to Fox News, 10 of the 13 victims were based out of California’s Camp Pendleton.

President Joe Biden has taken much criticism for his botched departure from Afghanistan after the nation’s nearly two decades of military presence in the nation following the tragic events of 9/11.

In addition to the deaths of American military personnel, an unknown number of Americans remain trapped in Afghanistan following the military’s Aug. 31 departure.