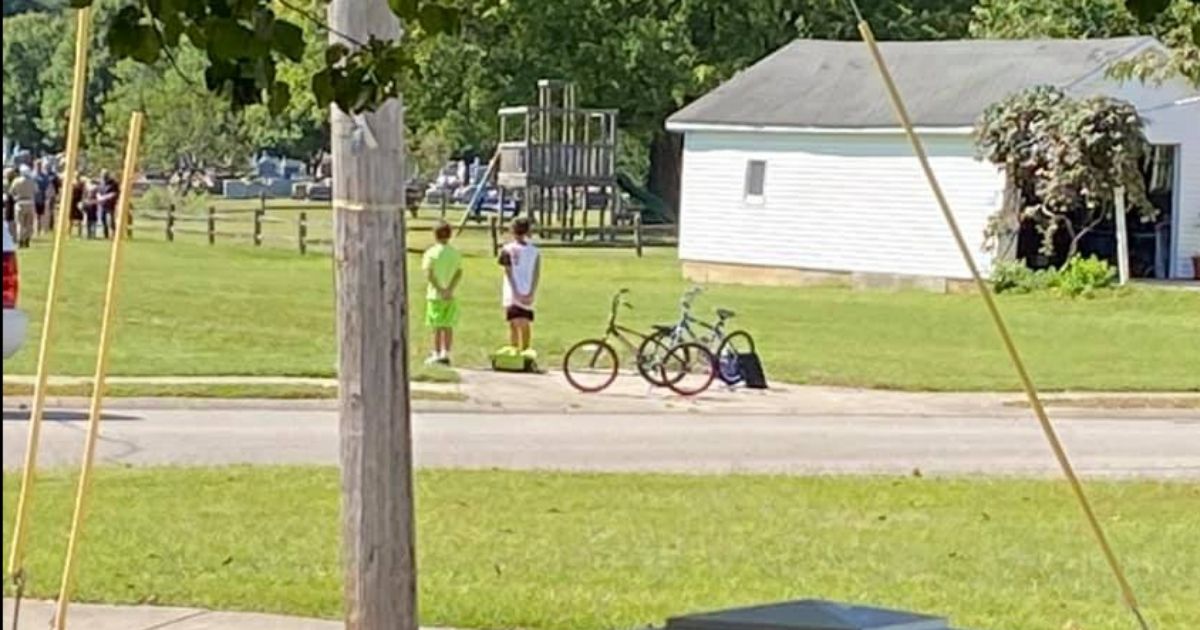 The following article, Two Young Boys Know What to Do When They Encounter Military Funeral: 'Their Parents Should Be So Proud', was first published on Flag And Cross.

An Indiana woman has shared a reminder that amidst all the wrongs in the world, there is a place where patriotism lives.

Jacqi Hornbach of Batesville, Indiana, was sitting outside last week when she saw a moment she could not resist sharing. Hornback told the story on Facebook.

“I debated whether or not to post this, but with all the negative things going on, I thought this was needed,” she began.

“I was dog sitting for a friend last week and was enjoying the nice weather outside when a funeral procession came into the cemetery across the street. These two young men were riding their bikes and saw the flag of the deceased military man,” she wrote.

“They immediately stopped riding, got off their bikes, and stood with respect as TAPS was being played. I had to snap a pic as I was so proud of these two young men,” she wrote.

“Their parents should be so proud, and im sure the serviceman was in heaven smiling down on them,” she posted.

The story drew a reply from a user who wrote, “That was my grandpas funeral. Thank you so much to those two young boys.”

Hornbach then replied, “I’m very sorry for your loss. I hope this brought you and your family a little bit of comfort!!”

“It absolutely did!!! Thank you for sharing,” Pierson replied.

A poster named Kristina Hicks, whose Facebook page noted the passing of her grandfather, then added, “grandpa was def smiling down on these 2 young men! This makes my heart so happy to see! I wish we would have seen them there and thanked them.”

PATRIOTISM: These photos were taken of two young boys who were riding bikes last week when they came across a military funeral in Batesville. They stopped to pay their respects to the veteran as TAPS played. pic.twitter.com/lYNIQ2X4UF

Being a model citizen starts early in life. These two boys are definitely leading by example.https://t.co/EkQGkadNmY

An obituary noted that Charles Everett Yorn of Batesville died on August 29 at the age of 89 and had his funeral service held last Thursday. The obituary said that “graveside military honors [were] conducted by the Batesville VFW Post #3183 and Prell-Bland American Legion Post #271.”

“Charles thoroughly enjoyed his time with his grandchildren and great grandchildren. He loved working in the sawmill, tinkering with tractors, wood working, and making odds and ends for his kids and grandchildren,” the obituary said.

As indicated by his granddaughter on the Facebook post, he would have deeply enjoyed the honor given him by the boys on the bikes.

Continue reading: Two Young Boys Know What to Do When They Encounter Military Funeral: 'Their Parents Should Be So Proud' ...